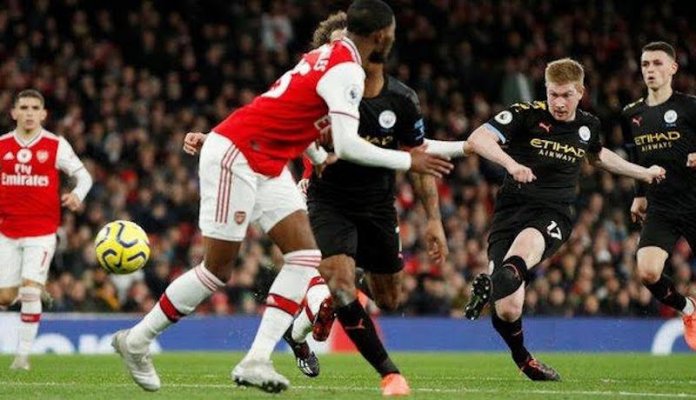 Caretaker Arsenal manager Freddie Ljungberg believes the club must make a permanent appointment quickly to halt their slide after a Kevin De Bruyne inspired Manchester City cruised to a 3-0 win at the Emirates yesterday.

De Bruyne scored twice and teed up Raheem Sterling for City’s other goal to leave Arsenal down in ninth in the Premier League on the back of just one win in their last 12 games in all competitions.

Ljungberg has been in charge for five of those matches, but is hoping a permanent appointment can be made before next weekend’s trip to Everton.

“It is a great honour to do this, but I’ve said I think it needs to be cleared up, to make a decision so that everybody knows,” said Ljungberg.

“It is totally up to the club. I try to do things as well as I can but it would be good to make a decision, regardless of what it is.”

There was little doubt City would bounce back from a derby defeat to Manchester United last weekend that left them 14 points behind Liverpool at the top of the table after De Bruyne opened the scoring just 90 seconds in.

Gabriel Martinelli had Arsenal’s only shot on target inside the first minute when Ederson blocked from his fellow Brazilian.

City broke straight up the other end and Gabriel Jesus’s low cross picked out De Bruyne to stroke the ball into the roof of the net.

Pep Guardiola’s men had been ruthlessly cut apart on the counter-attack by United and were conscious not to make the same mistake again as they allowed Arsenal possession for large spells before breaking at speed.

The visitors doubled their lead just 15 minutes in with De Bruyne this time the creator as he carried the ball forward before squaring for Sterling to slot home his 16th goal of the season.

De Bruyne then showed his superior quality to any other player on the pitch again five minutes before halftime as this time he curled into the bottom corner on his weaker left foot from outside the box.

“He is an extraordinary player, we didn’t discover his quality today,” said Guardiola.

“He sees passes and actions that normally human beings cannot see. I always tell him you have to score more goals and today he scored two incredible goals.”

Only a brilliant save from Bernd Leno denied De Bruyne a first half hat-trick moments later as the German’s fingertips turned another long-range De Bruyne effort onto the post.

Arsenal’s preparation for the game had been disturbed by the controversy surrounding Mesut Ozil’s support for the Muslim minority Uighurs in Chinese province Xinjiang.

Chinese state broadcaster CCTV pulled coverage of the match and Arsenal distanced themselves from Ozil’s comments.

The German was still selected by Ljungberg, but made little impact before being substituted on the hour mark and his slow walk to the touchline before booting away his gloves in frustration drew the wrath of some disgruntled Arsenal fans.

“The China thing, that is a political discussion that I leave for the club to deal with,” added Ljungberg.

“When it comes to other stuff, he should be annoyed when he comes off, but I am the coach I took the decision we need more energy in the team.

“We are a team that wants to have possession but sometimes we need to run and tackle and try to win the ball back.”

Only Leno prevented the scoreline from becoming even more embarrassing for Arsenal as he saved one-on-one from Jesus and at his near post from Riyad Mahrez.

The appointment of a new manager cannot come soon enough if the Gunners are to salvage anything from a thoroughly disappointing season so far.