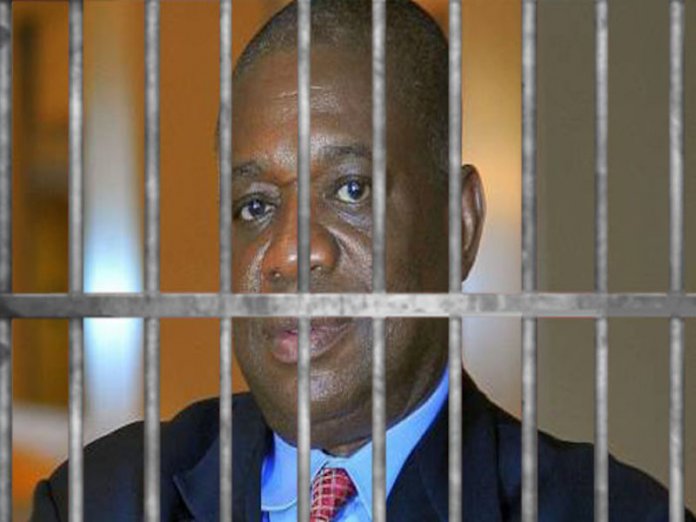 Segun James writes that former governor of Abia State, Senator Orji Uzor Kalu may still be grappling with the reality of his transition from a position of influence to a prisoner

Orji Uzor Kalu’s descent from the Red Chamber of the National Assembly as a senator to a prisoner is certainly a turning point in President Muhammadu Buhari’s fight against corruption in the country.

Although it took about 12 years in coming, the shock was no less when it happened. Kalu has become the third ex-governor in the country to be jailed for corruption. But his was the most shocking.

If Kalu had an inkling of what judgment was coming his way last Thursday, he probably would have feigned illness. Like most politicians, he was confident that nothing untoward will happen.

After all, he now belongs to the ruling All Progressives Congress (APC), where, he believed, he had met all the criteria for his sins to be forgiven and even forgotten.

He had joined the party from the opposition. He had also vilified his former colleagues in the Peoples Democratic Party (PDP) at every opportunity. What’s more, he had won a ticket to the Senate on the platform of the APC. He was a political asset!

He must have been confident that he would be acquitted of the corruption case; and that the the court process was simply a formality, to send him home with the injunction to sin no more.

However, that was not to be as he was found guilty of corruption and handed the “Go to Jail Directly” card.

The shock for Kalu was sudden, shocking and devastating. He was heard pleading with correctional officers: “Please don’t handcuff me, I will cooperate with you.”

It was the rise and fall of an ultimate power broker. The descent of a larger than life man; from a former governor to a senator; and now, to a prisoner!

The Federal High Court sitting in Lagos and presided by Justice Mohammed Idris found him guilty. The judge said Mr Kalu was guilty of the charges against. After the conviction, Kalu’s lawyers pleaded with the court for a favourable sentence.

Kalu has been facing trial for over a decade after he was arraigned by the Economic and Financial Crimes Commission (EFCC) for allegedly carting away billions of naira belonging to the state while he served as Abia governor.

He was tried alongside his company, Slok Nigeria Limited, and Mr. Udeh Udeogu, who was the Director of Finance and Accounts at the Abia State Government House during Kalu’s tenure as governor.

The Road to Perfidy

Although Kalu claimed that he started business at age 19 years and at 20 years, he was already a millionaire; this could not be ascertained. When he was barely 30 years, he had had brushes with the law. He was expelled from the University of Maiduguri for, as he claimed, activism.

But he gained notoriety when he allegedly donated cash to the Borno State Development Fund. Coming from a university drop out, the huge donation made the headlines, but the content of the box was later found out to contain blank papers neatly cut to size and covered with actual Naira notes. He was promptly arrested. Lke a Ninja, was able to explain himself out of the mess. By this time, he was already a known face in the nation’s business and political sphere. He began to hobnob with shakers and makers of the military, business and political hierarchy.

In 1999, at the age of 39 years, like a cat with nine lives, he came out from obscurity to win the Abia state governorship election to the consternation of many.

At the time he became governor on May 29, 1999, the new state had no state secretariat complex. Government businesses were conducted from rented apartments with civil servants squeezing themselves into buildings that were inadequate let alone comfortable.

Kalu took advantage of this to rent houses he hurriedly built for himself and others belonging to friends, family and cronies to the government at an exorbitant rate. Making fast money at the expense of a government in which he was the executive governor.

Throughout his eight years as governor, he never attempted to build a state secretariat even though land and monies were allocated for the purpose.

That Kalu was expelled from the University of Maiduguri was no longer news. The news was how he gained a first degree from the Abia State University, Uturu; an act that could only have been imagined by a master storyteller.

As governor and visitor to the Abia State University, Kalu enrolled for his degree programme. Barely three years later, he was awarded a first-class degree without ever attending classes for one day!

What’s more, to justify the certificate he has just gotten on a platter of gold, Kalu compelled the university to award him an honorary doctorate to boot. Hence the appellation, Dr. Orji Uzor Kalu that he bears today.

More than 14 years after the alleged graduation, nobody has called this certificate to question!

Although, Kalu’s conviction for stealing over N7.7 billion came over 12 years after he was first arraigned, up to that time, the state was one of the poorest in the country.

The revenue to the state from Federal Allocation between 1999 and 2007 when he was governor was N180, 913,356,049.45. What this means is that the state was barely making over N22 billion yearly, yet almost N8 billion was stolen within the period.

With a population of 2,833, 999, and raked 14th in the states allocation index, he dealt the state the unkindest cut.

As Kalu entered the prisons to begin his 12 years sentence, he was said to be worth over $300 million, according to the American magazine, Forbes in its ranking of richest businesspeople in Africa

Kalu is the founder of Slok Holdings, a conglomerate with interests in shipping, banking, oil trading, manufacturing and the media. He claims to have started in business at age 19 after being expelled from the University of Maiduguri for spearheading a series of student riots.

He borrowed $35 from his mother and started trading commodities like palm oil, rice and sugar. He diversified into furniture manufacturing and transportation and became a millionaire by the time he was 20!

He later hit the big time in the early 80s when the Nigerian military government awarded him lucrative contracts to import and supply arms and ammunition to Nigeria’s military.

The Slok Group operates in all sectors of the economy, mainly focusing on Oil and Gas, Banking and Finance, Media and Publishing, Real Estate, Manufacturing, Trading, Insurance, and Tourism.

Following a fall out with the leadership of the Peoples Democratic Party (PDP), Kalu founded the Progressive Peoples Alliance (PPA). The party won gubernatorial elections in 2003 and 2007 in Abia state and also won the governorship election in neighbouring Imo State that same year.

In the April 21, 2007 National Assembly election, the party won three of the 360 seats in the House of Representatives and one of the 109 seats in the Senate. This cemented Kalu’s leadership as force to reckon with in the politics of the nation.

Following the 2007 election, the PPA’s journey into oblivion began when the party agreed to join the PDP government of President Umar Musa Yar’Adua. For Kalu, the journey back to the PDP was like a homecoming as he was a two-term governor under the party, but for PPA, its death knell was just sounded.

The Journey to APC

But as the corruption case continued to dog him, the election of President Muhammadu Buhari in 2015 on an anti-corruption pledge forced the former governor to rethink his fortunes.

The EFCC renewed interest in his corruption cases, a situation which forced Kalu to abandon both PPA and the PDP for the APC. It was a classic case of a mother abandoning her child to nurture another person’s baby.

The fact that he was standing corruption trial did not stop the former governor from returning to politics as he successfully contested a senatorial election under the APC and won.

He had in 2015 lost his bid to be elected senator. But he returned to win the Abia North senatorial election in February 2019. Kalu won with 30,580 votes while the closest opposition candidate from the PDP, Mao Ohuabunwa, who beat him in 2015 recorded 21,940 votes. He later emerged as the Senate Chief whip.

In Nigeria’s political firmament, the prevailing scenario is that the wives of governors or political office holders gain notoriety by becoming the power behind the throne. In most cases, such ladies become the go-to-person if you want any favour from her husband.

But in the case of Abia state during Kalu’s reign, his mother took this bill, leaving his wife in the lurch.

Kalu’s mother, Mrs. Eunice Kalu was so powerful that she was called “Mother Excellency.” She even caused a rift between her son and then President, Chief Olusegun Obasanjo.

Not surprisingly, the former governor believes his corruption ordeals stemmed from this rift with Obasanjo.

According to him, Obasanjo unleashed the Economic and Financial Crimes Commission (EFCC) on him and his mother because she refused to endorse an elongation of tenure for the president.

Kalu disclosed in an interview with a national newspaper that men in police uniform once stormed the Aba home of his mom in a bid to arrest her, but they were resisted by security men at the premises who denied them access to the house. They fired sporadic gunshots for over two hours and subsequently left. That was how powerful she was.

After 12 years of standing trial, Kalu was eventually sentenced to 12 years in prison. As he was being led to the gallows, Kalu reportedly smiled at reporters and said, “2023, here we come” as he was led out of the courtroom by Correctional Services officials after his sentencing.

However, his steely behaviour soon gave way to reality as he begged the correctional officers, “please don’t handcuff me. I will follow you.”

As the corruption case continued to dog him, the election of President Muhammadu Buhari in 2015 on an anti-corruption pledge forced the former governor to rethink his fortunes. The EFCC renewed interest in his corruption cases, a situation which forced Kalu to abandon both PPA and the PDP for the APC. It was a classic case of a mother abandoning her child to nurture another person’s baby 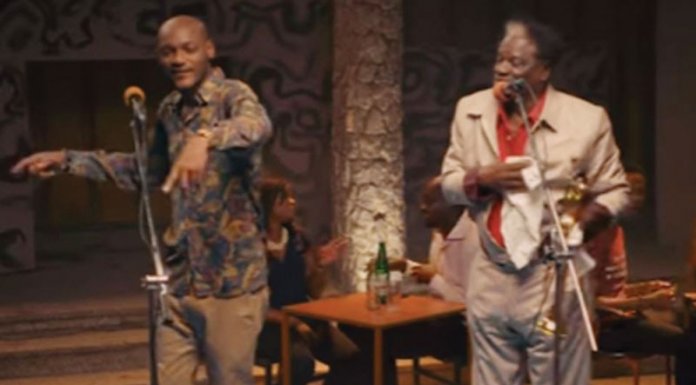