The Edo State Governor, Mr. Godwin Obaseki has called for increased collaborative efforts among nations, governments and their agencies in the fight against human trafficking, illegal migration and all other forms of modern-day slavery.

The governor said this in commemoration of the International Day for the Abolition of Slavery marked every December 2, by the United Nations and its sister agencies.

Obaseki noted that collaborative efforts across international borders would go a long way to identify, arrest and prosecute traffickers and smugglers in their different countries and states of origin.

Governor Obaseki said Edo State has recorded impressive gains in the fight against human trafficking, which include opening up economic opportunities for youths, building local capacity to drive economic growth and strengthening institutional capacity to check the trend.

He commended international development groups and Non-Governmental Organisations (NGOs) that are working with the state on the scourge, adding, “As we reflect on this day, the International Day for the Abolition of Slavery, we must remind ourselves that slavery still thrives in our various communities, taking different forms and types. The International Labour Organisation (ILO) estimates that more than 40 million people worldwide are victims of modern slavery including forced labour, debt bondage, forced marriage, human trafficking and other situations of exploitation that a person cannot refuse or leave because of threats, violence, coercion, deception, or abuse of power.

“We must continue to collaborate and forge paths to eliminate modern-day slavery in all its forms, just like we are doing in Edo State with human trafficking and illegal migration. While campaigning, I made a commitment to tackle human trafficking head-on. Today, according to the International Organisation for Migration (IOM), Edo State has recorded drastic drop in the incidence of irregular migration with less people recorded to have left the state since the commencement of our campaign against the scourge.”

He continued, “So far, we have received over 4900 of our sons and daughters who had embarked on dangerous journeys abroad and were trapped under inhuman conditions at the Mediterranean Sea and its neighbouring countries.

“We have continued to receive accolades for the work we have done and have resolved to deepen these reforms by prioritising the reintegration of returnees and also building the right institutional structures to discourage irregular migration. But we must work together if we must bring this menace to an end.” 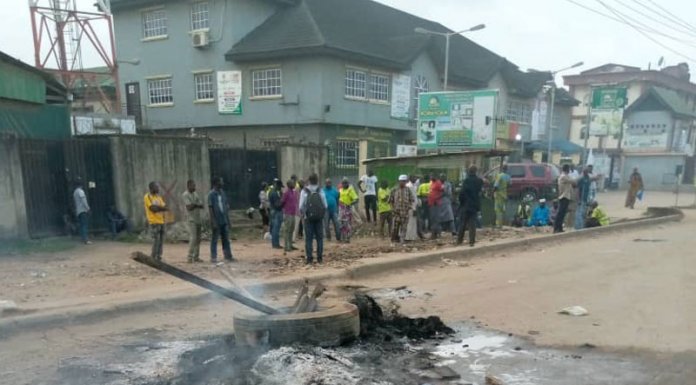 Reign of Terror in Lagos Community