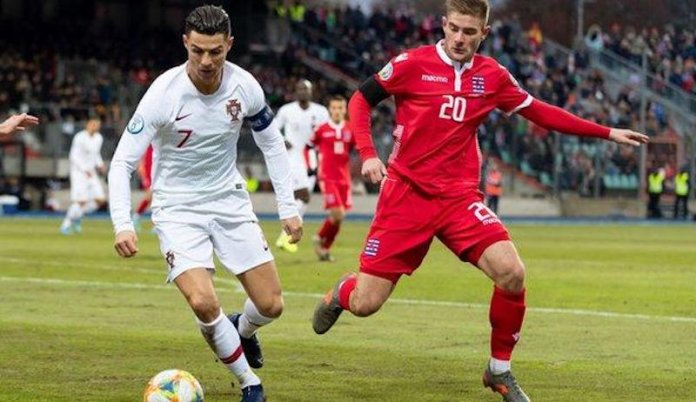 Cristiano Ronaldo vowed to break the world record for men’s international goals after scoring his 99th Portugal goal in a 2-0 win over Luxembourg to clinch their place at Euro 2020.

He is 10 behind Iran legend Ali Daei’s tally of 109, after his most prolific year for Portugal with 14 goals.

“All records must be broken and I will beat that record,” he said.

Bernardo Silva’s ball over the top allowed Bruno Fernandes to fire them ahead and Ronaldo scored a late second.

Holders Portugal needed to beat Luxembourg to make sure of a place at next summer’s tournament.

Ronaldo must wait until the next international break in March for the chance to become just the second male player to reach 100 international goals.

The Juventus forward struck his ninth international hat-trick – and the seventh since he turned 30 – on Thursday against Lithuania to set up the opportunity to hit a century on Sunday.

He says he is not fully fit, having been replaced in Juventus’ last two games before the international break.

“I wasn’t 100% and I’m still not,” he said. “In the last three weeks, I have played at a slightly reduced capacity.

“But when it comes to sacrificing myself for my club and my national team, I do it with pride.”