The Director General and CEO of the International Air Transport Association, Alexandre de Juniac recently recommended ways Africa can boost air transport sector and make commercial airline service profitable in the continent. Chinedu Eze writes that governments in the region must cooperate to make the implementation of the recommendations possible.

These included safety, cost competitiveness, opening the continent to travel and trade, and gender diversity.
De Juniac noted that across the African continent, the promise and potential of aviation is rich. He disclosed that the industry already supports $55.8 billion in economic activity and 6.2 million jobs, pointing out that as demand more than doubles over the next two decades; the critical role that aviation plays in Africa’s economic and social development would grow in equal proportion.
“With the right tax and regulatory framework, the opportunities aviation creates to improve people’s lives are tremendous,” De Juniac said.

Current Challenges
The major obstacles to realising these priorities are the aviation and travel policies enunciated by various countries in the continent, which tend to discourage free movement from one country to another, despite open sky treaty, the Single African Air Transport Market (SAATM); unfair charges and taxes that allegedly discriminate against African airlines by some African nations, and relatively high cost of airline operation in the continent.

In a recent interview with THISDAY, AWA Chief Operating Officer, Sean Mendis, noted that there is still protectionism despite SAATM and accused mostly French-speaking African countries of constricting their market by making it difficult for other African airlines to have free entry and exit operation to their countries and also observed that the spirit behind SAATM is epitomised by Nigeria and Ghana.

Sean also remarked that some of these countries that try to restrict other African airlines from easy entry to their routes literally open their doors wide for international carriers.
“Ghana and Nigeria are probably the best examples of people willing to take the lead, but the francophone countries in West Africa, in particular, Côte d’Ivoire is the one I would point a finger that tends to want benefit but without being reciprocal about it.

“In our society, you know that the person that comes to your house and eats and never invites you back will never be your friend for life and I think that is something that needs to change if we are going to be able to truly implement SAATM going forward,” Mendis said.

Cost Competitiveness
In his remarks at AFRAA AGA in Mauritius last Monday, De Juniac said that the success of African aviation is challenged by high costs, disclosing that African carriers lose $1.54 for every passenger they carry and attributed these losses to the high cost of airline operation in the continent.

He observed that jet fuel costs are 35 per cent higher than the global average; user charges are excessive and these account for 11.4 per cent of African airlines’ operating costs, which is double the industry average.
“There is a plethora of taxes and charges, some unique like Redevance fees, Hydrant fees, Railage fees, Royalty Fees and even Solidarity taxes,” the IATA Director General and CEO said.

Airline operators in the continent have over the years lamented these high charges and taxes. In Nigeria it is believed that it is the reason why carriers have ephemeral existence, operating and going under on the average of 10 years.
In Nigeria, some of the taxes paid by the airlines include the five per cent Cargo Sales Charge, five per cent Value Added Tax (VAT, which government was supposed to have withdrawn), Passenger Service Charge of N1000 per ticket on local route, Charter Sales Charge, Aircraft Inspection Fees, Simulator Inspection Fees, Landing Charges, Parking Charges and Terminal Navigational Charge. There is no tax holiday and airlines begin to pay taxes and charges immediately they start operation; no waivers, no tax holiday.

De Juniac said that development is the priority in Africa, which has potential for expanding its travel market.
“Aviation contributes significantly to 15 of the 17 United Nations’ Sustainable Development Goals. This includes the most ambitious—to eradicate poverty by 2030. Flying is not a luxury—it is an economic lifeline for this continent. That’s why it is critical for governments to understand that every extra cost they add to the industry reduces aviation’s effectiveness as a catalyst for development,” he said.

The IATA Director General therefore urged governments in the continent to carry out three actions: follow International Civil Aviation Organisation (ICAO) standards and recommended practices for taxes and charges; disclose hidden costs such as taxes and fees and benchmark them against global best practice, and eliminate taxes or cross-subsidies on international jet fuel.

“Additionally, we ask governments to follow treaty obligations and ensure the efficient repatriation of airline revenues at fair exchange rates. This is an issue in 19 African states: Algeria, Burkina Faso, Benin, Cameroon, Chad, Congo, Cote d’Ivoire, Eritrea, Ethiopia, Gabon, Libya, Mali, Malawi, Mozambique, Niger, Senegal, Sudan, Togo and Zimbabwe.
“We have had success in clearing the backlog in Nigeria and significant progress has been made in Angola. It is not sustainable to expect airlines to provide vital connectivity without reliable access to our revenues. So, we urge all governments to work with our Africa team to make this a priority,” De Juniac said.

Opening the Continent
De Juniac said further priority for governments is liberalising intra-Africa access to markets, stating that the high barriers that African states have erected between their neighbors are evident in trade levels.
He decried that less than 20 per cent of African trade is within the continent, which compares poorly with Europe at 70 per cent and Asia at 60 per cent.

De Juniac spoke in line with the Chief Operating Officer of Ethiopia Airlines, Mesfin Tasew, who lamented that African airlines play little in the African market.
Tasew had said that for African airlines to succeed they needed to cooperate and build capacity in leadership and resources and they need to be supported by their governments.

“You might have heard from different sources that today around 80 percent of African air traffic is carried by non-African carries. Hence, Africa shares the remaining 20 percent. So, there is a big market for African airlines.
“We have to take our reasonable share from this market. We can only take this share when Africans partner. We are brothers as African citizens and that is what we are encouraging. Unfortunately, many new starter African airlines didn’t succeed. The problem is internal capacity, capacity in leadership and deployment of resources.

“We don’t have the right visions individually. We have to cooperate on financial front, on maintenance, technical know-how and developing human resources amongst others. One of the critical problems for African airlines is that we don’t have enough trained aviation professionals.
“So, we have to cooperate. Unfortunately, we didn’t succeed for different reasons. One is lack of leadership, from African government and airline operators. Air transport business requires discipline in leadership and commitment.
“If you don’t control your costs, you cannot succeed. If you cannot develop long- term strategy, you cannot succeed. So, we have to help each other and government has to play an active role in facilitating development of airlines in Africa,” Tasew said.

Trade, Investment, Tourism
The IATA Director General and CEO also spoke on issues that would help aviation unlock more of Africa’s potential, not just for trade, but investment and tourism as well.
He said IATA is promoting three key agreements which, when combined, have the potential to transform the continent.
Firstly, is the African Continental Free Trade Area (AfCFTA), which came into force in July and has the potential to boost intra-Africa trade by 52 per cent with the elimination of import duties and non-tariff barriers.
Secondly, is the African Union (AU) Free Movement Protocol, which would ease the severe visa restrictions that African countries impose on African visitors.

“But only four states (Mali, Niger, Rwanda and Sao Tome & Principe) have ratified the free movement protocol. That’s well short of the 15 needed for it to become operational. So, there is still much work to be done,” De Juniac disclosed.

Lastly, three is the Single African Air Transport Market—or SAATM—which is the vision for opening intra-African connectivity.
“It has a strong regulatory framework and sufficient protections built-in. But only 31 African states have signed the SAATM agreement. And fewer still—nine—have translated it into national legislation.
“My message to governments on this triumvirate of agreements is simple—hurry-up! We know the contributions that connectivity will make to the SDGs. Why wait any longer to give airlines the freedom to do business and Africans the freedom to explore their continent?”

Safety
Although Africa has recorded improved safety in flight operations involving commercial airliners, but the IATA boss reiterated that safety remains the Association’s top priority.
“The loss of ET302 earlier this year was a tragic reminder of the importance of that priority. The accident weighs heavily on the entire industry.

“And it created fissures in the globally recognised system of aircraft certification and validation. Rebuilding public confidence will be a challenge. A harmonised approach by regulators to returning the aircraft to service will make a major contribution to this effort.

“We must never forget that global standards have helped to make aviation the safest form of long-distance transport. And there is a good example of that in the safety performance of African airlines.

“The continent had no fatal jet accidents in 2016, 2017 and 2018. That is largely due to the coordinated efforts of all stakeholders with a focus on global standards, guided by the Abuja Declaration,” he said.

To sustain the improvement already achieved, de Juniac said more states need to incorporate the IATA Operational Safety Audit (IOSA) into their safety oversight systems and advised that could be made a condition for the issuing of Air Operator’s Certificate. 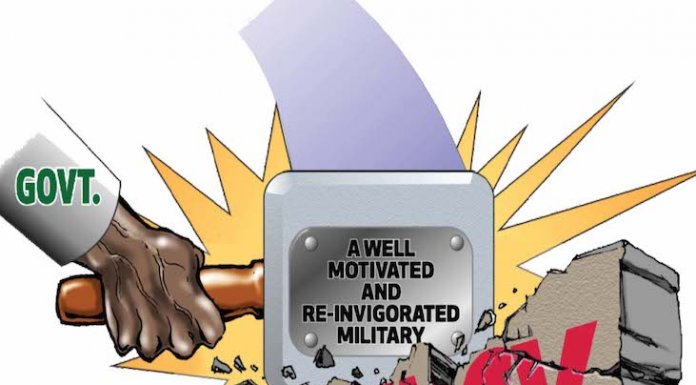 The Resurgence of Insurgency and Our Self-Denial