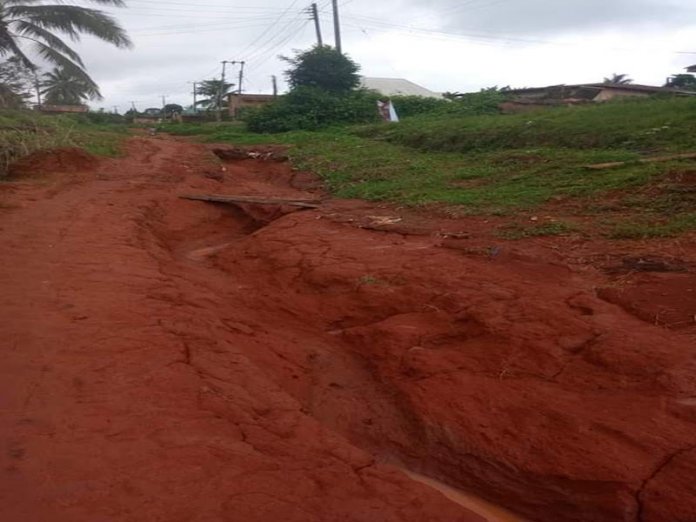 Chiemelie Ezeobi writes that Onicha-Uku Quarters, one of the Ubulu-Uku communities in Aniocha South Local Government Area of Delta State are appealing to the state government and the World Bank to save them from the menace of erosion that has almost cut off the community from civilisation

These are indeed troubling times for the Ubulu-Uku community in Aniocha South Local Government Area of Delta State. The state of their roads, which has been exacerbated by widespread erosion has almost cut off the community, thus making it nearly impossible to access their homes.

Burdened by the state of roads in the community. the community has appealed to the state governor, Ifeanyi Okowa, and the World Bank to save a part of their town from being wiped out by erosion.

For many indigenes of the erosion-ravaged Onicha-Uku Quarters in Ubulu-Uku at home and in the Diaspora, accessing their homes have become nearly impossible.

Predominantly farmers and civil servants, thee community is almost cut off, which is one of the reasons why the sons of the land in the Diaspora find it difficult to come home, especially during festive periods. The only road in and out of the area, which links the people to other communities in Delta and other states, has totally collapsed and is now a death trap. Presently, only the strong and courageous can walk through the road and many have been forced to park their cars and trek home.

According to a son of the soil, Comrade Christopher Oji, many have been injured, maimed and vehicles and other property damaged in the course of using the road.

Again, residents of Ubulu-Uku, who are predominantly farmers, can no longer access their farmlands. This has heightened fear of imminent hunger and starvation, as the only road that leads to their farms has been completely destroyed by erosion. There is also anxiety that if work does not commence to salvage the road immediately, in a few months’ time, many people would be trapped in their homes, which will likely be destroyed by erosion.

An America-based indigene of the town, Catherine Williams (nee Onwueme), who came from the United States of America for the burial of her elder brother, Boniface, was shocked as she could not get to her family compound with the three sport utility vehicles that were conveying her entourage and valuables.

Recounting her experience she said: “I have never been embarrassed like this. I was coming home in company with my friends from the US and those who joined us from Lagos. We had a smooth ride to Delta State, and I was so happy that we arrived safely. Just to enter my street, Onicha-Uku Quarters, in Ubulu-Uku, we were not able, because of the dilapidated nature of our road.

“We had no alternative than to abandon our vehicles. We paid heavily for people to convey our loads by carrying our stuff on their heads, as neither carts nor motorcycles could pass through the road. To walk through the road was like walking through the valley of the shadow of death, because the road was in the worst state of dilapidation. We eventually arrived at my home but with minor injuries.

“We daughters and sons of Ubulu-Uku in diaspora are asking to know the offence that the Onicha-Uku and Onicha-Okpe people committed that they have been abandoned by the three tiers of government. They voted for the Peoples Democratic Party (PDP), which is in control of Delta State. I wonder what the road will look like in one year’s time.

“On behalf of Ubulu-Uku people at home and in diaspora, I am appealing to Governor Ifeanyi Okowa and the World Bank to do something drastic to avert a total extermination of our people.”

Another concerned indigene of the town, Phil Ngozi Ojeogwu said: “The Ubulu-Uku/Onicha-Ugbo (Onicha-Uku/Onicha-Okpe) road has totally collapsed. It is impassable, dilapidated and in such an embarrassing and deplorable state that commercial motorcycle operators have refused to ply the road even when enticed with huge amounts of money as fare. They see the road as a gateway to the orthopedic hospital or traditional bonesetters’ homes.

“My experience last week was the apogee of unwarranted embarrassment. My husband, myself and our visitors went for a burial. When we got to the road to our quarters, a major road that leads to other communities and states, we could not pass. We had to park our cars about four kilometres to our house. One of our visitors broke a limb. What a shame!”

On his part, Alex Grant, another native of Ubulu-Uku, said: “It is shameful that right now residents of Onicha-Uku and Onicha-Okpe quarters make wooden bridges across the centre of the road to enable them reach the main bridge to their homes. Onich-Uku road now has three gutters, one right, the other at the left and another in the centre of the road.”

Another indigene, Pius Monye, Oke Osisi 1, who spoke from Atlanta, Georgia, United States said: “I am a freeborn of Onicha-Uku Quarters in Ubulu-Uku Kingdom. My message to Governor Ifeanyi Okowa is that we voted for him during the first and second tenure, so he should carry us along and treat us with respect and dignity.

“It is obvious that the contract for Onicha-Uku road was awarded and was said to have been completed on paper, but, till today, the road is an eyesore and so many of our people are keeping quiet out of fear of those big politicians who sabotaged the contracts.

“On behalf of Ubulu-Uku people in the diaspora, I am calling on Governor Okowa to look into the Onicha-Uku road matter. My people voted for you and you made a promise to take care of the road. But this same road that links Onicha-Ugbo and Ubulu-Uku is still abandoned till date. Please, declare a state of emergency on the road.”

A social critic, Patrick Omebele, who spoke from Maryland, USA, said: “It is the primary responsibility of the three tiers of government to take care of roads. Government should consensually determine who owns the road. If it is a state-owned road, the state should, through government intervention or Ecological Fund, repair the road.

“I travelled home two years ago for my mother’s burial. I was lucky that it was during the dry season, but I spent lots of money filling the road with sand. I don’t think with the present condition of the road, any right-thinking person would dare the road.

“Government should declare a state of emergency on the road. The youths have tried their best. During dry season, they would sand-fill the road and it would be manageable, but the present state of the road is beyond what individuals can do.”

Mrs. Grace Okolie, an 85-year-old grandmother,
said she was hopeful that something meaningful would be done soon on the road. She thanked the philanthropist, Mr. Pat Eziashi, for putting streetlights along the collapsed road.

She said: “If not for him, nobody would visit as from 8pm. At least, some courageous people manage to visit us, but, for old people like us, we are trapped in our homes. I am begging our son, Okowa, to assist us and repair the road so that, when I die, people will be able to come for my burial.”

Reacting to questions about the authorities’ seeming neglect of the town, Deputy Chairman of Aniocha LGA, Joe Ikenwe told another daily (not THISDAY) that the state government was doing something about the road and pleaded with the Onicha-Uku people to be calm. He said government’s efforts to repair the road had reached an advanced stage.

An official of the state government, who spoke on the condition of anonymity, said the Delta State government and the World Bank were collaborating to repair the road.