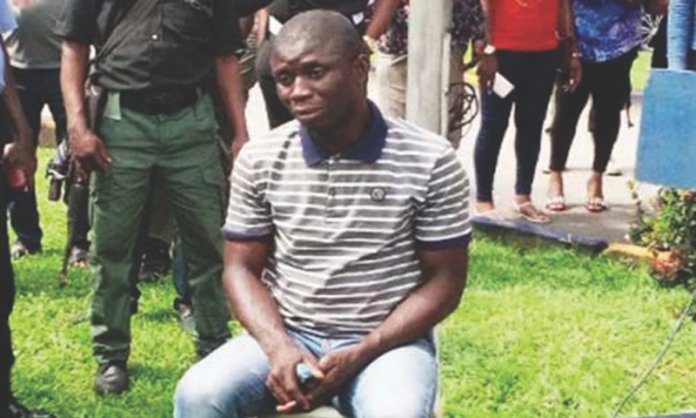 The suspected serial killer in Port Harcourt, Rivers State, Gracious David West, yesterday pleaded guilty to charges of murder preferred against him by the police at the State High Court.

He, however, accused the police of withholding 60,000, wrist watch and jewelry seized from him during his arrest.

This is coming as the Rivers State Government also took over the prosecution of the suspected serial killer.

The Rivers State Police Command in suit PHC/3426/CR/2019 had preferred a 10-count charge of conspiracy and murder on west.

The police charged West of unlawfully killing of several women in different hotels and guest houses in parts of Rivers State, which is a punishable offence under Section 319 sub 1, Cap 37. volume 2 laws of Rivers State 1999.

West, however, pleaded for forgiveness after pleading guilty to nine counts out of 10 charges preferred against him by the Rivers State Police Command.

He pleaded not guilty to the last charge bothering on killing of one of the young ladies in a hotel around Bende Street in Port Harcourt, stating that he only tied the lady’s hands and legs and left her on the bed.

After taking the plea, the Rivers State Government through the Attorney General and Commissioner for Justice, Zaccheus Adango, applied to take over the prosecution of the matter.

The police prosecutor on the matter did not oppose by the application.

The trail Judge, Justice Adolphus Enebeli, after listening to the argument first entered non-guilty plea for the suspect, making references to different sections of the criminal code of the law of Federal Government and state respectively.

Enebeli granted the application of Rivers State Government to take over the matter, expressing readiness to give speedy hearing of the case.

He adjourned the matter to November 18, 21, 27 and 29, and December 4 for hearing and remanded the suspect in prison.

West had during proceedings told the court that he preferred to tell the truth so he could be pardoned, adding that he committed the crimes unconsciously.

West stated that the police seized his N60,000, necklace and wrist watch. He urged the court to compel the police to release the said items to him.

He said: “My Lord, I have something to say, I killed all other girls in the hotels but that one in Bende street, which is on the tenth charge, I did not have in mind to kill her, I only tie her on the chair.

“My Lord, all these things I did I did it because I was possessed by evil spirits. I want the court to forgive me, that is why I said the truth.

“My Lord, I have a complaints to make, all my property I left in the SARS station; they have refused to give me; my money, N60,000, my wrist watch and other things, My Lord tell them.”