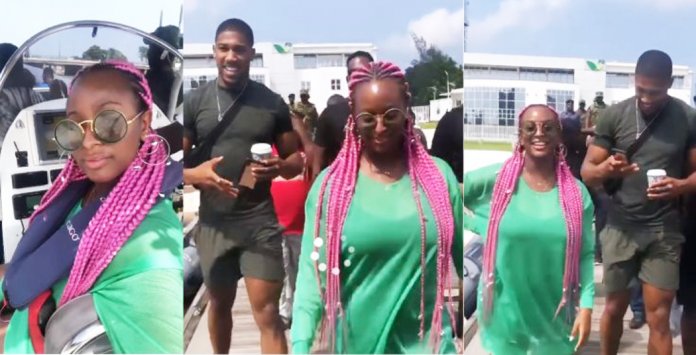 Is something serious about to happen in the relationship between DJ Cuppy (Florence Otedola) and star boxer Anthony Joshua? For quite some time now, both celebrities have been spotted together in and outside the country.  Joshua and DJ Cuppy, daughter of billionaire businessman, Femi Otedola, sparked dating rumours when they were spotted hanging out several months ago.

There has been open exchange of gifts from both sides, first from the Gelato singer who gifted the heavyweight champion a cake to celebrate his return to motherland Nigeria. Just last Saturday, the famous disc jockey showed off a customised neck piece she received from the former world boxing champion.

The two were present at a family gathering to celebrate the birthday of Joshua’s son where the boxer presented the gift to DJ Cuppy.

In a video clip which was shared by the billionaire on his Instagram, Joshua was captured presenting a gift to Otedola, whom he thanked for making his Nigerian visit possible.

The oil magnate was seen thrilled in the clip as he stated that he was excited to be meeting the former IBF, WBA, WBO heavyweight champion.

Both further exchanged pleasantries and warm hugs. Recall that Joshua touched down in Nigeria in July and was hosted by DJ Cuppy, who shared several photos of them spending time together and enjoying some of the special places and things in Nigeria.

Reliving that memory, the boxing champion had a lot to be thankful for when he met Otedola in London and referred to him as “uncle.”In response to the sweet gesture, Otedola expressed delight over meeting Joshua.

DJ Cuppy, who happens to be one of the most talked about female disc jockeys in Nigeria, had made a startling revelation about her love life. The young woman who was born with a silver spoon revealed during a recent interview that she has dated every race of men apart from Asian.

DJ Cuppy made the statement during a chat with OAPs at Hot FM in Lagos. “I have dated more or less every race apart from Asia,” she said laughing in a video which was posted online Instagram by the radio station. The soft hearted and fun loving Nigerian once shared photos of herself and the Nigerian-born British boxer enjoying themselves in Spain. Markedly, the duo then once again sparked dating rumours due to the emergence of their cozy picture.

In the video shared, Anthony Joshua was seen smiling and accusing DJ Cuppy of not bringing his “Gelato” while coming over to Spain. Meanwhile, Joshua who is limbering up for a rematch with Mexican Andy Ruiz after a shock defeat on June 1st, 2019, would be 30 on October 15.