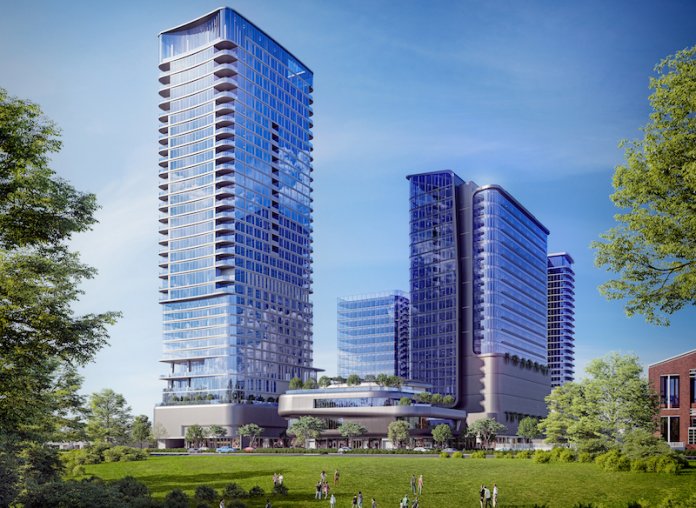 For high net worth Nigerians, Houston EB-5 Investment is arguably the most secure and fastest way to obtain US Green Card, writes Nume Ekeghe who was recently in Houston to cover the event

In 1990, the United States Congress created a new immigrant visa category for qualified foreign investors seeking to invest in a business that benefits the U.S. economy by creating or preserving at least 10 full-time jobs. This piece of legislation gave birth to the EB-5 immigrant investor visa program.

To receive a US Green Card, foreigners are required to invest $1 million in the U.S. economy, although that number is reduced to $500,000 if the investment is made in a Target Economic Area (TEA) as rural or high unemployment areas.

Approximately 10,000 green cards are available through the EB-5 program each year. Although interested applicants in the EB-5 can invest individually, most visas are granted to those who invest through Regional Centers (RCs), which operate as investor pools.

Essentially, RCs are US government approved third-party intermediaries that connect foreign investors with US based project developers in need of funding for which they earn a commission.

One of such RCs is the Houston EB5. It is also one of the most successful RCs in the United States since it is one of the first RCs that is entirely focused on developing world-class award-winning real estate projects. Given that real estate investments are considerably safer than typical business investments, participants in Houston EB-5 projects can expect a more predictable and timely return on their investment.

According to Managing Director for Houston EB-5, Mr. Acho Azuike, the company was established in 2010 with a mission to assist immigrant investors to gain permanent US residency by investing in high-quality real estate developments.

What makes Houston EB-5 unique is that it’s a wholly owned subsidiary of DC Partners, an award-winning real estate developer and investment conglomerate with the financial muscle and expertise to execute major real estate projects. As such, unlike traditional RCs which are dis-interested third party entities in the EB-5 transaction only interested in earning commission, Houston EB-5 is an equity participant in all it’s projects, ensuring total commitment to overall project success while far exceeding the statutory jobs creation requirement.

“We take exceptional care of each development as we also invest our own capital into the project,” Executive Vice President, Houston EB5, Emilio Guzman, said. “So, it’s not only our investors who are investing. Within the capital stack, we have a lot of skin in the game. And that is a key distinction. We also manage the EB-5 processing in-house, we handle the marketing and development in-house; and that makes us a unique player in the EB-5 world”.

Since inception in 2010, the organisation has and continues to partner leading industry experts to consistently deliver world-class projects. Houston EB5 has completed highly four successful raises, in excess of $93 million for their Astoria, Eighteen

25, Marlowe, and Arabella projects. They particularly take deep pride in their 100 per cent success rate on I-526 and I-829 visa approvals. In other words, investors are literally guaranteed a US Green Card and full redemption of their investments plus profit sharing.

Historically EB-5 investors have been predominantly from Asia. (In 2014, 85 per cent of the 10,692 EB5 visas issued went to Chinese nationals). However, Houston EB-5 was one of the first RCs to see the EB-5 potential in the Nigerian market and remains the most popular RCs among Nigerians. For example, in a recent round that culminated in a $45m raise for Houston EB5 $14 million came from Nigerian investors, according to Azuike.

“As such Nigeria is a very important market for us and are looking to grow our already successful Nigerian presence”, he added. “Having been in Nigeria since inception of our company, we have judicially sought to establish a stellar track record, which has resulted in many happy Nigerian Investors and their families successfully going through the EB-5 project lifecycle. They, in turn have become a valuable source of referrals for us”.

“Further evidence of our commitment to Nigeria is the new marketing campaign we’re launching under the banner “Turn Your Nigerian Success, Into Your American Privilege” complete with Print Advertising, Television and major online rollout of www.myamericanprivilege.com/nigeria.”

A key characteristic of Houston EB5 projects is the amount of attention to detail and sheer elegance that go into them, making them instantly iconic. One of the company’s completed projects is Arabella, an award-winning, 33-floor high-rise consisting of 99 residences, 14 penthouses and covering 278,820 sq. ft. From its stunning entrance and spectacular lobby to beautifully appointed interiors, Arabella set the bar for elegant living in Houston.

Another notable project is Eighteen25, which covers 62,500 sq. ft. – an entire city block in downtown Houston consisting of 250 luxury apartments in an eight -storey building.

Then there is the Thompson San Antonio Hotel and Condominium, a premier hospitality destination on the world-renowned River Walk in San Antonio, Texas. This luxury high-rise comprise 20 floors, 162 hotel rooms, and 58 residences, featuring over 5,000 sq. ft. of riverfront meeting space and sweeping views from every vantage point. It’s a miraculous destination.

Currently, Houston EB5 is fundraising for The Allen – an extraordinary project by any measure, it will feature a luxury hotel, condominiums, retail and state-of-the-art office buildings. It is expected to feature sophisticated design that has never been seen in all of Houston. For phase one, Houston EB5 is looking to raise about $56 million.

Based on their track record, there is little doubt that The Allen will be a roaring success. The company’s impeccable track record of creating value through development of high-quality assets and while assisting immigrant investors secure permanent residency in the United States is, perhaps, unparalleled.

Recently, the United States government revised the minimum investment required to qualify for an EB5 visa. From November 21, immigrant investors will need to invest $900,000 rather than the traditional $500,000 required for investments in TEA designated area in rural or high unemployment areas; and $1.8m instead of $1m in other areas. Houston EB-5 reports a steep spike in the number of Nigerian investors looking to beat the deadline.

The process is straight forward especially when done through a reputable RCs like Houston EB5, who has vast experience and expertise in the EB-5process. Typically, once a prospective client expresses interest, Houston EB5 keenly listens and takes time to understand their unique situation: why they are investing? Is it for their children’s education? What are the driving issues?

Once initial conversation is completed and the investor wishes to proceed, it is time to bring in an immigration attorney to begin the paper work. According to Houston EB5 executives interviewed for this report, perhaps the most important part of the process is the ability to identify and verify the source of funds, to avoid contravention of US money-laundering laws.

Once this stage is cleared, the paperwork is completed and filed with the authorities. If everything checks, approved investors can get conditional green cards within two years.

The Allen – A City of Houston Partnership

Houston EB-5’s latest and most ambitious project, The Allen, is being championed by the City of Houston, due to impact the project will have on from economic, environmental and preferred destination perspective. According to Houston’s Deputy Mayor Jerry Davis, who has spent eight year in office, the city government has partnered Houston EB-5 over the past four years to bring this important project to fruition. Groundbreaking is scheduled to commence by mid-September, 2019.

“They’ve done many amazing projects in the city of Houston, so we are very aware of their expertise, resources and what they are able to do,” Davis said.

“They have completed many successful projects in Houston, so we have a good frame of reference of what they can do. That’s the primary reason the City of Houston has thrown its full support behind The Allen project.

“Allen is going to bring a massive sense of diversity. It’s going to have retail, different styles of living; it’s transforming lives; it’s by the waterway, where you have a lot of activity, and it will increase the activities by having a place where you are just a few minutes from downtown; so you have high executives who may live there; you come out during the weekends and have great leisure; and then other amenities they are going to offer. It’s just going to be top state-of-the-art”.

He also hinted that they city is prepared to exceed favorable tax incentives to ensure the project’s success.

“We are going to receive lots of taxes, but the city of Houston is also willing to reinvest some of the taxes they are going to pay us back into the organisation, for sustainability,” he noted.

“We are a firm believer in companies that are invested in the future of Houston and are willing to put their dollars here to work. We are the fourth largest city in America, and we are ready to play with the big boys, the New Yorker’s, the Californians, the Chicagoans. We want to send a clear message to make sure everyone understands that Houston means business.”