Chiemelie Ezeobi writes that among other things, the immediate past Minister of Transport, Rotimi Amaechi, at a reception organised in his honour by members of the British Business Group, delved into the issue of the perennial traffic in Lagos, the state of the railways and the controversial suspended RUGA project

The former Minister of Transport (MoT), Mr Rotimi Chibuike Amaechi, was recently hosted to a reception in Lagos by members of the British Business Group. Amaechi who is now a minister-designate, was honoured for his contributions to the nation’s economy, especially in the maritime/transportation industry in the last four years. They also used the opportunity to sell the potentialities of the group to the minister and the benefit it affords each of its members.

his speech, Amaechi who reminisced on his portfolio as the erstwhile MoT, also touched on some salient national issues ranging from the national single window, the perennial traffic situation in Apapa, the
Rural Grazing Area (RUGA), ethnic and religious discord tearing the fabrics of the society and the need for caution on all sides.

“National Single Window is the synchronisation of the process of clearing of goods,” he explained. “What that means is that, as soon as your goods are on the ship, before the ship gets to Nigeria, all the clearing processes would been completed. In fact, in Benin Republic, if you don’t get your cargoes out in 24 hours, there is a park where they are put, so that the seaport would be empty.
“We fought the battle until the last meeting we had. We couldn’t agree, as each person tried to tilt the argument his own way. Eventually, that has been passed. When the new government resumes, depending on who the Ministers for Finance and Transport are, they would need to sit and agree on the modalities for the establishment and operations of the National Single Window.

“As soon as your goods arrive, they are cleared immediately. There are tracking systems that would monitor your goods from the port of origin to Nigeria. And there are investors that are ready to put down their money, but government must play its part.”

Perennial Traffic
Amaechi who spoke on the perennial traffic crisis on all the roads leading in and out of the Apapa ports in Lagos, asserted that the only enduring solution to the unending challenge is the Lagos-Ibadan rail service.
“That is the only solution,” he noted. “We were heading to the port. It is unfortunate that I am no longer the Minister of Transport. If I return as Minister of Transport, by September, I will be pushing everybody to get to Apapa port.
“Initially, the rail system was to stop at Ebute Meta. But I said, I have never seen a country where the rail system would end in the town; it must get to the seaport. So we awarded a contract to the seaports – Apapa Port, Port Harcourt Port, Warri Port, Calabar Port and Onne Port”.

He said the container-laden articulated vehicles that clog Lagos roads should ordinarily be put on the rail tracks for onward transportation to Ibadan, and from there to other parts of the country, adding that once such cargoes are being transported by rail, the pressure on roads would stop and the roads would be back to normal.
“We’ve awarded the contract from Ibadan to Kano for 5.3 billion dollars. We are looking to get a loan from the Chinese government. If we’re able to get that and we construct the rail from Ibadan to Kano, the problem in Apapa would have been significantly reduced.”

RUGA
On the controversial Ruga project, which has been suspended temporarily, Amaechi said the widespread rejection and eventual suspension of the settlement programme robbed the country of several benefits.

The Ruga settlement programme, an initiative of the Federal Government, was targeted at curtailing the violence being unleashed on farming communities by alleged Fulani herdsmen in many parts of the country.

The suspended Ruga programme was to have farm settlements and ranches built on several hectares of land acquired by the Federal Government in the states, while schools, hospitals and other critical infrastructure would be constructed in such communities. Herders and their cattle were to be restricted to those communities where they would have access to basic social amenities denied them by their nomadic lifestyles.

Former Minister of Agriculture, Chief Audu Ogbeh had stated that the approval of the Ruga settlement programme for herders by the federal government was to help bring an end to farmers/herders clashes in the country.
Ogbeh had said: “We are going to build settlements where herders will live, grow their cattle and produce milk. The milk will be bought by a milking parlour, thus preventing their wives from moving around with milk. This is especially to avert any conflict between the herders and the farmers.”

Alhaji Mohammadu Umar, Permanent Secretary in the Federal Ministry of Agriculture and Rural Development, while agreeing with the then minister, said: “Under the new plan (Ruga settlement), cattle herders are expected to be registered and recognised with cooperatives for the purpose of the ranching scheme. These cooperatives will then be able to get rental agreements for land from state governments and also benefit from ranch resources on several terms, including loans, grants, and subsidies.”

But the Ruga initiative was massively rejected by millions of Nigerians, especially in the South-east, South-west, South-south and North-central states, stating that it was a ploy by the government to donate their ancestral lands out to Fulani herdsmen.
But according to Amaechi, the project was rejected because many people simply did not understand the policy, just as he blamed governors that came up with the initiative for failing to properly explain its implementation to the people.

He said Ruga would have been a successful programme if those that brought the concept had adequately enlightened Nigerians on its workability.

He said: “If you’ve been to Israel, there are farm settlements. And it is a mistake on the part of the governors who came up with the idea, because they did not explain it well. As a governor, if you know that you’re not an expert in certain areas, the first step is to get those who are experts in that area. And when you know that you have little knowledge of a concept, you sit down to be lectured.
“Because the concept was not properly explained to the people by the governors who initiated the idea, Nigerians started shouting that they didn’t want Ruga. What is Ruga? Farm settlements. Simple. I build on 10, 000 hectares of land. I provide water, light, roads, schools, markets, accommodation, and hospitals on that land. Then I look for 1, 000 persons on that land. I ask each person to take 10 hectares of land and farm. As a governor, I have two options. I may buy your produce from you and sell. Or I allow you to sell. But if I buy from you, you make more profit.

“But many Nigerians said, ‘no, no. it’s for cattle.’ What if it is for cattle? We have a national emergency. People are being killed daily. These men have no other job, and they must eat.”
He said the programme was suspended because President Muhammadu Buhari is a democrat. “If it was a madman that is in charge, he would have insisted on Ruga and people would have followed him”.

He asserted that the myriads of social crises in the country today were engendered by the failure of the elite to provide proper leadership for the people and better their fortunes over the years.

“If we had provided for the poor at the time we were supposed to provide for them, create an economy that is productive, give them good education and make them employable, then the security would have been guaranteed. Crime would reduce. You could drive to your house at 2.am, and it wouldn’t be a problem. In Nigeria, we are even afraid of the taxi driver. So, we created poverty, and the consequence is insecurity.

“What Ruga set out to do was to create an employment opportunity for as many as possible that can take to farming. It is unfortunate that many people saw it as a ploy to empower the Fulani people. Some people started playing politics with Ruga, saying all sorts of things,” he added.

Need for Caution
He further cautioned Nigerians, especially the elite, to stop fanning the embers of ethnic and religious discord among the people, warning that such could turn different ethnic groups against one another.

“If there is a war today, some of us will travel out of the country. But how many ordinary people will be able to travel out? I saw the civil war as a child. I will not see another war as an adult. We must stop creating ethnic and religious divisions among our people,” he stated.

Although the reception was held to honour Amaechi, it ended up being a forum to buttress some salient issues in the society, especially as related to uniting the fabrics of the society. 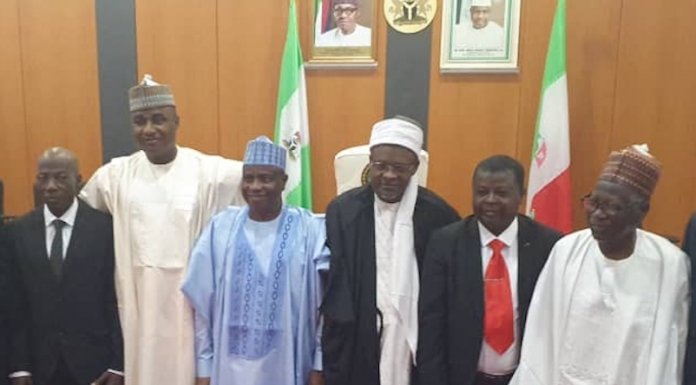