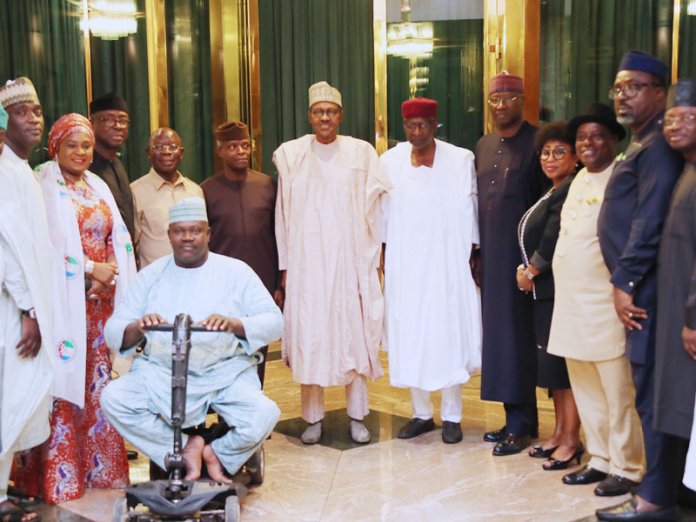 The ruling All Progressives Congress (APC) wednesday urged President Muhammadu Buhari to close the ranks between the rich and the poor to address the problems of inequalities among Nigerians.

The party, at a meeting in Abuja with the president, particularly implored him to recreate the middle class to guarantee a stable and peaceful society.

APC National Chairman, Mr. Adams Oshiomhole, led members of the National Working Committee (NWC) of the party to the meeting with the president, the first of its kind since the re-election of Buhari after the last February presidential election.

The meeting came on the same day the opposition Peoples Democratic Party (PDP), after reviewing what it called escalating insecurity, rising political uncertainties, biting economic hardship as well as prevailing tension in the country, pointedly told the president that the country was collapsing under his watch.

Answering questions from State House reporters after the meeting, which held behind closed-doors, Oshiomhole described it as an opportunity not only to congratulate the president on his re-election, but to remind him that he had a lot to do for Nigeria.

Oshiomhole said they told the president that he had the mandate to provide leadership to Nigerians by working with both the party and the National Assembly to deliver services that would bridge the gap between the poor and the rich.

The committee also told the president that APC was prepared to build an institute to help the people understand the ideology of the party and simultaneously reveal the party as a pro-poor political party that would put in place policies aimed at lifting the people from poverty and recreate the middle class.

According to him, unless the middle class is re-created, there will not be a stable and a peaceful society.
He said the tragic situation in Nigeria today was that people were either very poor or very rich, adding that the problem of inequality between the poor and the rich must be addressed.

“What is the essence of progressive politics, basically it is about social democracy. So, our party must be seen to be pro-poor, putting policies in place that will lift our people out of poverty and recreate the Nigerian middle class,” he said they told the president.

He added: “Unless you recreate the Nigerian middle class, you are not going to have a stable and a peaceful society. The tragedy for now is that over the period, people are either very poor or they are very rich. The president has to provide leadership working with the National Assembly leadership to see how we can over the next four years, deliver so that the current situation of extremely poor and extremely rich will be bridged by recreating the middle class.”

Oshiomhole also described the APC as a party committed to social democracy and hence, the need to educate all elected members on the party’s commitment to an egalitarian society.

He said the victory of the party at the last general election was a call to duty and so elected officers had the responsibilities to deliver good governance to the people.

Oshiomhole said the forum also presented to the president the party’s financial report in which the party accounted for all its expenditures during the last general election.

He said: “As a political party, which is committed to social democracy, we want to make sure that everybody elected on the platform of our party understands the dos and don’ts, in terms of politics and policy choices – our commitment to egalitarian society and all of those things that make a progressive party different from a conservative party.

Oshiomhole said they congratulated the president for appointing ministers, adding that they were happy with the progress that had been made and commended the Senate for delaying their recess to be able to screen the ministers.

He said they also commended the president for organising a retreat for the ministers before they would be allocated their respective ministries so that they would understand their mandates.

Asked as a former labour leader for his reaction to the arrest of the publisher of Sahara Reporters, Mr. Omoyele Sowore, on his call for revolutionary protest, Oshiomhole, who said he had led a series of protests in the past, added that whoever wanted to protest must state clearly the reasons for his protest.

He criticised the detainee, saying having contested and lost an election, he wanted to be made president through the backdoor.
Oshiomhole said even though the country was facing numerous challenges, the people had collectively agreed that the only way to resolve them was through the ballot box.

According to him, while he believes in people’s right to disagree with the government, there is no country where people begin to make calls for revolution after an election has been concluded.

“I don’t want to talk about this, but I believe Nigerians have a right to protest. I believe people have a right to contest issues. People have the right to disagree,” he said, explaining: “I have often said government doesn’t have the right to dictate to people how to protest, but you must state exactly what you want. I ask you to name any country in the world where somebody stands up and say after the election that ‘I contested and lost, now therefore I want revolution.”

Oshiomhole also dismissed insinuations that the NWC is enmeshed in crises in view of perceived division in the committee, which led to the expulsion or suspension of some members.

He wondered how meting disciplinary measures to only two of the 21-member committee could amount to a crisis and a division.
A statement issued later by the Special Adviser to the President on Media and Publicity, Mr. Femi Adesina, on the meeting, however, said Buhari assured members of the NWC that he would be more conscious of the interests of the party while making key decisions.

According to Adesina, Buhari pledged to uphold party supremacy and commended Oshiomhole and other members for their sacrifices and overall success in the last general election.

According to him, the president assured the NWC that competent members with the requisite experience would be given appointments as heads and chairmen of boards of governmental parastatals and agencies.

The statement also quoted Oshiomhole as telling the president that while it was regrettable that the party lost some states, the greatest victory of the APC was in Kwara and Gombe States.

‘‘In Kwara, we uprooted the ruling dynasty and inaugurated absolutely loyal and totally committed APC men at the helm of affairs,’’ he quoted Oshiomhole as saying.

Meanwhile, the NWC of the PDP has raised the alarm that the country is collapsing under Buhari and the APC.

The party said in a statement by its National Publicity Secretary, Mr. Kola Ologbondiyan, that it was deeply worried that the country, which was a prosperity hub and a reference point for democracy, personal freedom and good governance, was showing all the trappings of a failed state with the government being unable to guarantee any of its fundamental duties.

He said the national leadership of the party rose from a crucial meeting yesterday, noting that the red flag had become urgent, following the manifest total loss of faith by Nigerians in the ability of the Buhari presidency to provide a democratic leadership that can engender peace and secure the nation.

“It is clear that the APC and the Buhari presidency have held Nigerians hostage. Nigerians are now being treated like a conquered people. They can no longer freely exercise their constitutionally guaranteed rights; executive high-handedness has become a state policy just as the APC government, burdened by challenges of illegitimacy, has lost direction and only thriving in vindictiveness,” it said.

The PDP also accused the president of ruining the economy and leading the nation to become the world’s capital of poverty, while condoning the humongous corruption that it said had become the hallmark of his failed administration.

“Sadly, President Buhari’s anti-development policies, the corruption in his government as well as its failure to provide security have scared away foreign investors from our nation,” it said.

It nevertheless urged Nigerians not to despair but to keep hope alive in their confidence that the tribunal would rule in favour of its presidential candidate in the last election, Alhaji Atiku Abubakar.