On the 10th anniversary of the Boko Haram insurgency last Saturday, some of its gunmen on motorbikes opened fire on a group of mourners as they walked back from a funeral at Nganzai on the outskirts of Maiduguri, Borno State capital. The body count was 65. Some two days later, Boko Haram’s splinter faction, the Islamic State West Africa Province (ISWAP) launched a dawn attack against a base near the town of Baga on Lake Chad, setting off fierce gun battles that reportedly killed 20 Nigerians, five Chadian troops and some 40 jihadists. Yet, in spite of the consistent attacks and fatalities from the group, the current administration has repeatedly maintained that the Boko Haram group has been decimated.

While reviewing the decade-long brutal war last week, the Presidency restated the position declared some four years ago that Boko Haram has been tamed, and awarded itself winning grades. “At present, terrorist activities have been confined to the remote, rural agrarian areas of Borno State and pockets of outrages in Adamawa and Yobe States”, said presidential spokesman, Garba Shehu. “What we have now is a mixture of remnants of the Boko Haram, fugitive criminals and the Islam in Maghreb together with West African terrorists bonding together.”

The empty rhetoric cannot wish away the problem. Boko Haram, whether real, remnants or fugitives, still constitutes mortal danger to the Northeast in particular and to the country at large. Widespread security challenges in 2015 still persist, in addition to new ones. Whilethe military may have recaptured the territories once controlled by Boko Haram members and who may no longer operate as freely as they used to, the insurgents cannot be said to have been defeated, given the frequency of their atrocities. The authorities must therefore admit that the increasing spate of attacks is not only stoking unease in many of the affected communities, but in the entire populace.

Boko Haram has continued to launch deadly attacks on military bases not only in several communities in Nigeria but also in some countries sharing the Lake Chad Basin. In recent weeks, there has been an escalation of bloody attacks on hard and soft targets, with body counts rising by the day. The attack on Nganzai last week and the string of losses to the rebel group are poignant reminders that much more needed to be done to win the war. Besides, the emptying of villages and towns in Borno State into Maiduguri by people fleeing the war is another reminder that Boko Haram, once declared as the “deadliest terror group in the world” by the Institute of Economics and Peace, an Australian think-tank, is still very much an affliction.

The decade-long war has claimed some 30,000 lives and displaced about two million people. And perhaps in confirmation of the dangers posed by the extreme religious group, the country in 2017 set aside $1 billion, outside the routine budget of the military, to prosecute the war. But this has shown little by way of results. Thus what perhaps may be closer to the truth was the admission by the Chief of Army Staff, Lt Gen Tukur Burutai last June that low morale and lack of commitment by the military was affecting the routing of the insurgents, an assertion which also raised many posers.

We have often commended our military for the critical role they have played in the fight against Boko Haram and in making sacrifices on behalf of the nation. We also believe they should be given all the support they need in the bid to rid the nation of terrorism. While awaiting the long-expected delivery of Super Tucano turbo-prop warplanes from the United States to boost the fight against the insurgents, the federal government needs to reappraise its strategies and rise up to the occasion as we can no longer continue to lose innocent lives and valuable property to these senseless terrorist activities. But the authorities must first admit that there is a problem. The damage wrought by a decade of battle is enormous. We cannot continue to live in denial. 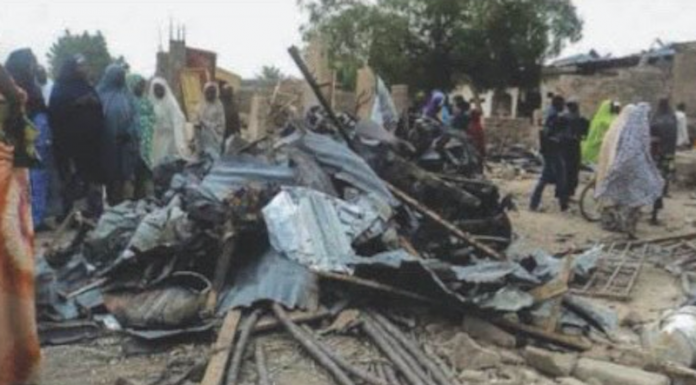