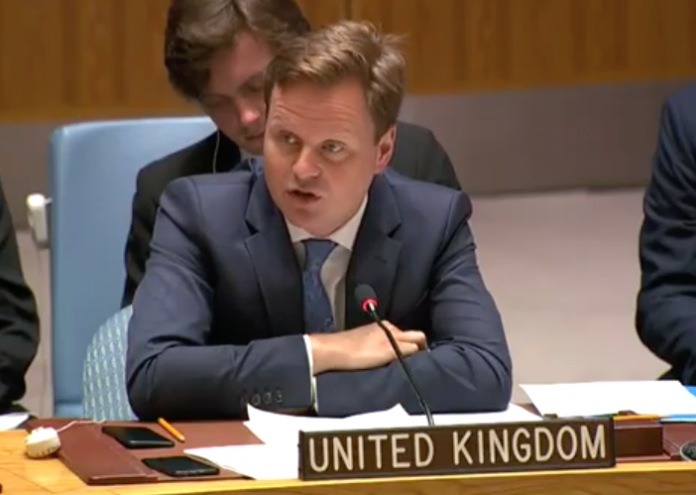 `The United Kingdom Coordinator, United Nations, Stephen Hickey has stated that the deteriorating security situation in Northern Nigeria is having a devastating effect on the people of the Lake Chad Basin region.

In a speech delivered during the security council briefing on Peace Consolidation in West Africa, published by the UK government yesterday, Hickey said the Lake Chad Basin region was often overlooked by the council, particularly in recent years.

He said: “The UK is discussing with the Nigerian government on what more the international community could do to help it tackle the crisis. Clearly, extending state authority into so-called ungoverned spaces will be essential in order to stem the advances of Boko Haram. “We welcome the United Nations Office for West Africa and the Sahel’s (UNOWAS) efforts to date, and we encourage further support to the governments in the region to tackle the crisis and to implement the United Nations Security Council Resolution (UNSCR) 2349 on the Lake Chad Basin region”.

Resolution 2349 refers to the threat of terrorism in the Lake Chad Basin by Boko Haram and the so-called Islamic State of Iraq and the Levant (ISIL). The resolution reiterated the primary responsibility of member states to protect civilian populations in their territories and encouraged countries in the region to prioritize human rights concerns and facilitate greater cooperation with UN agencies.

He said the Sahel was a major concern for the council, and that the UK government has recently announced that it will make a future commitment of 250 troops to United Nations Multidimensional Integrated Stabilization Mission in Mali (MINUSMA).

“But we must all do more to help address the root causes in the Sahel. And as we heard during our recent visit to the Sahel, these include reducing abuses by the security forces, helping governments provide basic services, and mitigating the conflicts over resources by helping people to adapt to climate change.

He also explained that on elections in West Africa.

“The UK believes that these inclusive, democratic processes are critical not just for international peace and security, but also for creating an enabling environment for investments and for sustainable development more broadly. And I think it is absolutely vital that all authorities and international partners work together to ensure that future elections in the region are timely, peaceful and credible.”