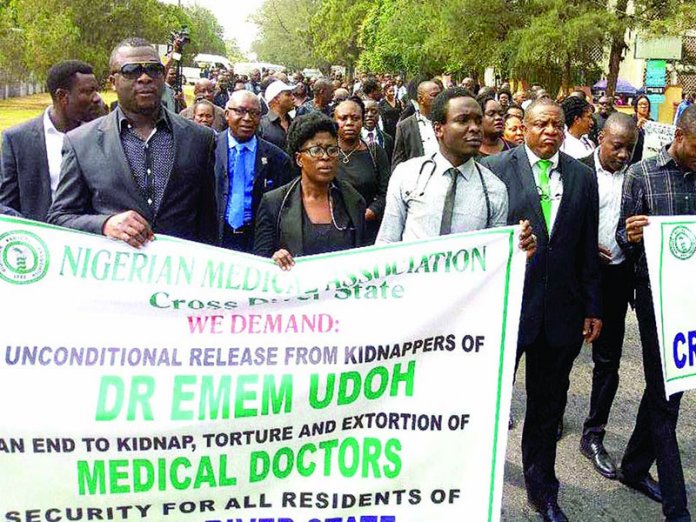 Medical Doctors in Cross River State, operating on the platform of the Nigeria Medical Association, NMA, stormed the State House of Assembly, Calabar on Thursday where they laid their protest against the incessant kidnappings of their members at the door steps of the states lawmakers.

The doctors also took their protest to Government House where they laid a similar complaint before the state governor, Professor Ben Ayade.

While the medical doctors were marching through some streets in Calabar to the seat of power in the state, all public and private hospitals remained closed in continuation of the indefinite strike they embarked on following the abduction of Dr. Inyama Marcus about a week ago.

As of press time, Dr. Marcus was still in captivity in the unknown abode of those who kidnapped him.

Chairman of NMA in the state Dr. Agama Ayuk, who led the protesting doctors, lamented that in the last four years, 8 medical doctors, and six members of their households had been kidnapped in the state.

Ayuk said the NMA was demanding the immediate release of Dr. Marcus by those who kidnapped him last Thursday in Akpabuyo Local Government Area, close to Calabar.

Speaking at the premises of the State House of Assembly, Ayul who was flanked by hundreds of his colleagues said the frequent kidnapping of medical doctors in the state was “worrisome and disturbing.”

Lamenting the plight of medical practitioners in the state in the hands of kidnappers, Ayuk said government should provide adequate security, not just for members of the NMA, but for everybody in the state.

Ayuk said, “On July 18 2019, one of our colleagues, Dr Marcus was kidnapped on his way to his house. Since then, he has been captive and they are demanding very outrageous sum of money which we know is very difficult for doctors to pay.

“This is the 14 kidnapping on doctors and their dependents across the state within the last four years. We work day and night and we feel that we are not safe in carrying our responsibility of saving lives.

“And if we are not safe, we cannot save lives. People are on call and we cannot go out of our houses to attend to them. So we have to withdraw our services to strengthen the hands of government to do more in providing security

“As we speak, many people are being kidnapped in Cross River day and night and we believe that the government whose primary responsibility is security and welfare of the people should do more to protect us.

“Cross River is no longer safe for us. We hope that this issue will be taken as a matter of urgent public importance because we want the unconditional release of our colleague.”

Ayuk said the ongoing strike by members of the NMA will continue until Dr. Marcus regains freedom.

Speaker of the House, Mr. Eteng Jonah-Williams, who responded to the address of the NMA said the lawmakers would give serious attention to the demands of the medical doctors.

“We need the Permanent Secretary on Security to come and explain to us. Within one week alone, I know of three persons that have been kidnapped within Calabar; this is a very sad development.

“We are with you, we will make sure that something is done urgently because I see no reason why doctors who save lives should be targeted and kidnapped always,’’ the speaker said.

At the Government House, it was similar complaints from the NMA over the frequent kidnapping of their members.

Esu promised that the state government was working seriously to secure the release of Dr. Marcus from the kidnappers den.

He appealed to the medical doctors to call off their strike in the interest of the generality of the public.