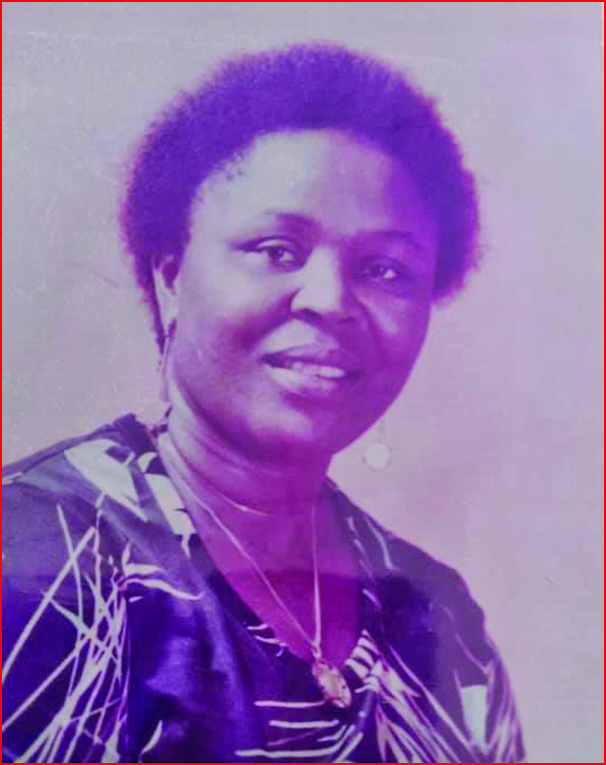 “Moral excellence comes about because of habit …we become just by doing just acts, temperate by temperate acts, great by great acts.” ––Aristotle

At the end one can ask, what is the most important thing in life? The answer is far-fetched; however, Henry Wadsworth Longfellow offers some tip and opines that it is simplicity. Simplicity in character, in manners, in style; in all things the supreme excellence is simplicity.

Late Chief (Mrs) Odoziaku Anastasia Onukwuli realised from the onset as Saint Peter said in Acts 3:6, “Silver or gold I do not have, but what I have I give you…” What you gave is by far greater than silver and gold. You gave yourself, your all to all. You were available to everyone that came your way, and like a candle that consumes itself while lighting the way for others, you sacrificed for others to live.

You left at a midmost age of just 54 and did not have opportunity of growing old. However, as Martin Luther King, Jr says, it is not long we live that matters but how well we lived. You were an epitome of virtue that is very rear in this modern age of individualism. You portrayed the four classical cardinal virtues of prudence, justice, temperance and courage.

You were born into the noble and dignified Okwudili family of Ifite Nkwelle Ezunaka on February 19, 1940. Your father, Chief Uduezue Thomas Mbaekwe Okwudili was Taskmaster at Nigerian Railway Corporation and your mother Madam Afuluenu Okwudili, a founding member of the defunct National Council of Nigeria and the Cameroons (NCNC) right at its inception in 1944. NCNC was a Nigerian political party established by Herbert Macaulay and Nnamdi Azikiwe for pursuit of Nigerian independence.

Life for you as a youngster was full of promises as you trans-versed Nigeria with your father who was constantly on transfer, from Port Harcourt to Enugu, Makurdi, Kano, and back to Enugu. Those were indeed the happy days. However, tragedy struck in April of 1948, with the sudden and untimely death of your mother at blossoming age of just 34 after returning from an independence campaign rally. This singular event changed everything. You were now to live without the direction and succour of your dearly beloved mum who was your hero and role model. However, you did not allow this to determine your pathway and out of the ashes of this tragedy, you rose.

With this, you knew that you had to fight for yourself. At 15 you enlisted at the then highly admired and sort after Holy Rosary Teachers’ College, Enugu run by Catholic Nuns. At 18 in 1958, you qualified as Grade II Teacher in flying colours, and commenced teaching immediately afterwards at Saint John Primary School Odoakpu, Onitsha. Due to your young age, your father had to arrange for you to stay with his cousin, Chief Eziako, the renowned couturier. His son and former executive Director of Bank of Agriculture, Dr. George Eziako, will later recall, “Miss (Odoziaku) was very strict and would insist you do your homework, however, she will go out of her way to help you”.

You later met your heartthrob, Chief Chinyelugo Onukwuli, who was then a Registrar at the High Court of Justice, Onitsha. The relationship blossomed and culminated into a nuptial union. The rest, they say is history. The fruits of this marriage are six children, which includes the writer and numerous grandchildren. Like Saint Gorgonia of Nazianzus, Cappadocia you raised your children and grandchildren to embrace lives of service to God and charity to others. You typified the virtue of hospitality, welcoming all who came to your home and sharing all that you had with everybody.

Another tragic event that would shake your being to the marrow was the death of your immediate younger brother, Obiora, of whom you had a sisterly love that was beyond compare. You took over the payment of his school fees immediately you started teaching and saw him through secondary and the University of Nigeria, Nsukka, where he qualified as a Civil Engineer in 1967. At, the advent of the Nigerian Civil War he immediately joined the Biafran Army and died in action at Obosi just weeks before the end of hostilities.  As a kid, I was with you when the sad news was broken to you. You were utterly devastated and I cannot ever recall witnessing such grief and sadness. This unfortunate event, more than anything else, would shape the rest of our days.

After the Civil War, you moved to Aba with your husband who was then the Chief Registrar at the High Court of Justice with residence an approximately one-acre mansion at Aba GRA. In 1971, at the age of just 31 you were elevated as the Headmistress of Mosque Road Primary, School Aba. Between 1976 and 1978, you took time from work to complete your Bachelor’s Degree in Education from the prestigious University of Nigeria, Nsukka and thereafter proceeded to United Kingdom for your Postgraduate Degree in Education. Despite these accolades of distinction and palatial rubrics around you, you remained yourself. As reflection of the good wife in Proverbs 31:10-31, you stood firmly behind and supported your husband in all his dealings.

You became the bedrock of your husband’s Onukwuli-Ezedigwe Family as well as your family of birth. You cooked, fed and provided for all that came for assistance especially during the very difficult years following the Civil War. You never left anyone go hungry and empty-handed. You prioritised, rationalised and knew the value of time. You planted yourself in the hearts of people. You were not allured or intrigued by external beauty or fame. You were not a great fan of fame, pomp, circumstance and pageantry. You knew that there was lots of work ahead, so you kept things simple and conserved as much as possible to reach the most needy. Nonetheless, recognition and admiration found you and came your way. You won numerous encomia as most valuable teacher and mentor as well as mother of faith. The chieftaincy title of Odoziaku bestowed on you in recognition of your simple, judicious and prudent lifestyle.

You retired from public service after thirty-five years of pedagogic excellence in 1993, at the sprightly age of only 53. You took ill shortly afterwards during the national turmoil of Abiola Debacle. Your loved ones and doctors did everything they could to save you but He that loved you most took charge. On August 2, 1994 at about 7:20 am you took your last breathe on earth. I recall, the words of Reverend Father Tim Anunobi then Bigard Memorial Seminary, Enugu, who came immediately to offer blessings, “My eyes have seen a real Saint in Odoziaku”

The Saints are role models for how we are to live. They are human beings, complete with human faults, who have managed to live extraordinary lives of holiness. The path that leads to holiness is paved with love, prayer, and service and all wrapped in simplicity. There have no doubt been many holy married women throughout history, but they have lived quiet lives, and in death, go equally unnoticed except by the One who knows all and sees all. Perhaps it is simply that work done within a family is hidden work and much less likely recognised by the world at large.

Odoziaku, you believed that moral rectitude was the ladder on which great and enduring societies ascended. Many of your achievements may go unnoticed and unremembered by many who benefitted because your largesse, kindnesses and generosities were for the asking and, thus, taken for granted. You were a quiet revolutionary that formed the platform and bastion for others to stand, garner and prosper. You were an unsung and a great teacher, who touched the lives of many. Nonetheless, many of your former pupils remain eternally grateful for indelible and ineradicable impact you had in their lives. For instance, one Chief Nwajiugo Onwuatu of Ifite, Agbaja Abatete keeps saying, “without Odoziaku’s push and encouragement, I will not have succeeded”.

You touched the lives of most people not by giving but by leading by example. You were philosophically opposed to excessive laissez-faire, as you believed that order is the law in heaven. You insisted that there is time for everything and disproportionate liberalism would come back to hunt, and life is more of nurture than nature.  This rhymes with thoughts of Chiron, foster son of Apollo, who was the wisest and “justest” of all notable centaurs throughout Greek mythology for his youth-nurturing nature. Rules and nudging, therefore, should animate our existence, as primordial nature is ill equipped for the job.

Your motto was simplicity. The uninformed regard simplicity as deprivation, however, it is about paying attention to things that really matter. As Debasish Mridha would say, simplicity reveals the pure and inner beauty of life. Simplicity clears the way and eliminates the unnecessary so that only the necessary is on the podium. At the end, simplicity is more than a way of life; it is being in tune and harmony with cosmic energies of creation. According to Leonardo da Vinci, “simplicity is the ultimate sophistication.” Leo Tolstoy would summarise, “There is no true greatness where there is no simplicity, virtue and truth.”

Odoziaku you were truly and simply great. Through simplicity and selfless service, you achieved enduring greatness. Adieu, rest in perfect peace until we meet to part no more.