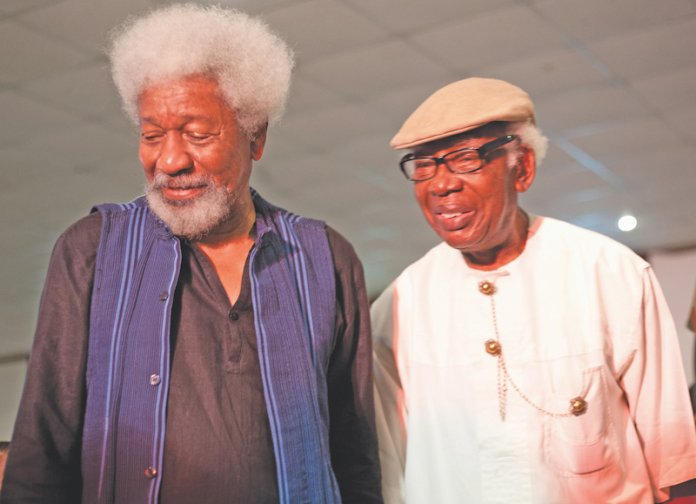 I called Gabriel Okara early in 2005 to tell him of the Rainbow Book Club’s plan to begin a national reading campaign right here from our city of Port Harcourt. Before i dialled I wondered how best to introduce myself; should I say my father was a colleague and friend of his late brother, Justice Richard Okara, should I say I was at Port Harcourt Primary School with his son and namesake, Imomotimi, or should I simply introduce myself as a diehard literary enthusiast overjoyed at the thought of being able to speak to him, even over the phone. I ended up introducing myself as a student of his late wife, Louise Okara, who shared a Jamaican heritage with my mum, and who was my favourite music teacher!

I then told him of a young Nigeria lady who had recently written an impressive novel titled Purple Hibiscus, and that we were bringing her in from New York as our Guest author to flag off our ‘Get Nigeria Reading again!’ campaign. I asked him to be a special guest at the dinner we would hold on Saturday May 28th at the Hotel Presidential. Everything went as planned and we kicked off our reading campaign with Chimamanda Ngozi Adichie on Children’s Day, 2005.

I called Gabriel Okara mid-2008 to tell him that Governor Amaechi had asked the Rainbow Book Club to organise a book festival for Rivers State and our maiden outing would be in September that year. I invited him as a guest of honour and he attended. When he was introduced during the opening ceremony at the University of Port Harcourt, he raised his signature baseball cap in acknowledgment and the hall erupted in applause to the first ‘modernist of Anglophone Literature’. Over the years Okara had garnered awards: 1953 Winner, Best All-Round Entry in Poetry at the Nigerian Festival of Arts for The Call of the River Nun, 1957 winner of the Commonwealth Poetry Prize for The Fishermans’ Invocation and 2005 winner of the NLNG-sponsored Nigerian Prize for Literature for The Dreamer, His Vision. From that outing, and for the 6 years that followed, Pa Okara was always a prominent part at our book festival.

I called Gabriel Okara in 2010 to inform him that, at that year’s Garden City Literary Festival, we would be honouring himself and 49 other writers, in commemoration of Nigeria’s 50th independence anniversary. He participated prominently in the week-long event, where he also received his plaque from Vice President Namadi Sambo. Later that year I informed Pa Okara that I was putting together an anthology of 50 Nigerian authors to commemorate Nigeria’s golden jubilee and that President Jonathan had agreed to write the foreword to the book. He welcomed this idea and gladly accorded me an interview.

I called Gabriel Okara in 2012 to inform him that the Rainbow Book Club had put in an application for Nigeria to produce the World Book Capital in 2014. With cities like Lyon, Moscow, Sharjah and Oxford in the race the competition was stiff. He threw his weight behind our candidature by joining us at the press conference where we announced our entry. When we won I called to give Pa Okara the good news.
I called Gabriel Okara early 2013 to inform him that, at the instance of the Rainbow Book Club, the River State Governor would be reading to students of State Primary School, Kpite (Tai L.G.A.) on Children’s Day. I told him we had chosen his book, Little Snake and Little Frog, as our text for this outing. He was delighted and facilitated our purchase of over 600 copies of this work which teaches on peaceful co-existence, a dire lesson needed at a time when his beloved Niger Delta, that inspired his writing, was coming out of a disturbing period of militancy.

I called Gabriel Okara, late in 2013, to request an interview as I was putting together a commemorative publication prior to Port Harcourt’s World Book Capital tenure. He obliged me, sharing his desire that: ‘Port Harcourt may become not only one-year World Book Capital but a recognized Book Capital of Nigeria’. He disclosed: ‘The vibrant city of Port Harcourt …. has inspired some of my poems such as ‘Mass Transit Buses’.’ He surprised me, when, in response to the question of what he would want a first time visitor to PH to know, he said ‘The Rainbow Book Club … which has brought with focus, the city as an important growing educational centre in this country.’ ‘What do you know for sure at 93?’ I asked him finally. ‘I know for sure that the flesh will go as all flesh and the spirit goes as all spirits in the image and likeness of God,’ was his reply.

I called Gabriel Okara early 2014 to intimate him of the details of the Port Harcourt World Book Capital year which would kick off on World Book and Copyright Day. I told him we had named each day of the opening ceremony week after an important Nigerian author and that Thursday 24th April, his 93th birthday, was Gabriel Okara Day. On that day, he was interviewed by journalists Anote Ajelorou of The Guardian and Henry Akubuiro of The Sun. An interactive session followed, after which we surprised him with a birthday cake. He cut it surrounded by some of the other writers after whom the opening ceremony week days were named: Wole Soyinka, J.P. Clark and Elechi Amadi. Then we sang him ‘Happy Birthday’.

I called on Gabriel Okara, on the 26th of April 2017, to indulge me with a photograph. We were outside the Ebitimi Banigo Hall of the University of Port Harcourt, where a literary festival held in his honour. I eagerly stooped beside his chair and smiled like the grateful child I was to be beside such a great man. It would be the last time I would see him.
God called Gabriel Okara on 24th March 2019, and he answered.
–– Kalango, MON, Founder, Rainbow Bookclub, Project Director, UNESCO World Book Capital 2014