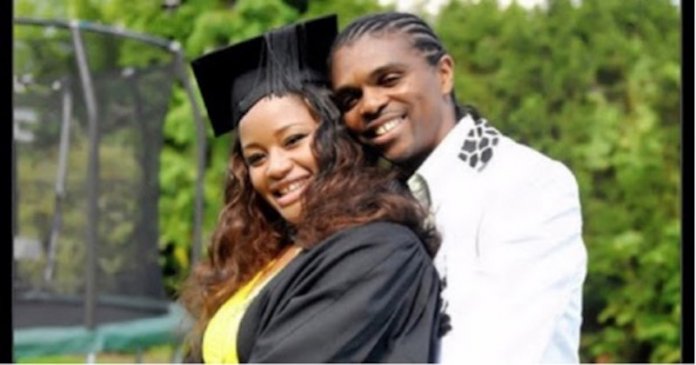 Former Super Eagles’ international, Nwankwo Kanu and his wife Amarachi celebrated 15 years of marital bliss on July 2. With three beautiful kids and a love that shines with more lustre than the full moon’s, the couple certainly got all they ever hoped for from the marriage and the happiness and love is just getting started.

The excited ex-footballer could barely contain his glee as he shared the news on his social media accounts. He thanked God for seeing them through the ups and downs and promised there will be more of the same. Usually a very private person, even he had to make an exception to toast himself and his wife on reaching the milestone.

Kanu and Amarachi got married in 2004 while he was still a footballer and banging in the goals with a sharpness that would make Nigeria’s misfiring strikers at the current Africa Cup of Nations burrow into the ground in shame. Despite the gap of ten years between the couple, and Amarachi’s relative inexperience when she got married at 18, the couple have made it work against all odds.

Kanu, who has since hung up his boots and transitioned into investment and philanthropy, must have wondered if he could recreate his sharp-shooting prowess on the football pitch to the marital home. As it turned out, he had nothing to be worried about. He has been scoring nuptial goals with the regularity that made him a household name in the English Premier League with Arsenal and Portsmouth. Now reportedly worth $100 million, he lives a low-key life with his wife and family.

Despite officially retiring from the sport more than half a decade ago, Kanu remains the most decorated Nigerian ever to lace up a football boot. Papilo, as he is fondly called by soccer aficionados, has won the UEFA Champions League, a UEFA Cup medal, three FA Cup Winners medals and two African Player of the Year award amongst others. Aside from those achievements, Kanu Nwankwo is also one of the few players to have won the English Premier League, FA Cup and an Olympic Gold Medal.

Not much is known about his family apart from what they chose to reveal as they live very private lives devoid of the ruckus that usually emanates from celebrity homes. Since getting married, Amarachi has obtained a degree in Architecture and a master’s in Entrepreneurial Management from the European Business School, London. She has published a fitness and lifestyle book, Healthy Living which was launched with fanfare at the Emirates Stadium, London in June 2017.