Hearing of the Hope Democratic Party’s (HDP) petition against the outcome of the February 23 presidential election was on Thursday stalled owing to confusion over the authentic petitioners before the Presidential Election Petition Tribunal (PEPT) sitting in Abuja.

Both the HDP’s presidential candidate in the last general election, Ambrose Owuru, and one Poland Awinitabre are currently laying claim to the chairmanship of the party forcing the tribunal to adjourn the pre-hearing session in the party’s petition at the tribunal.

Owuru and the HDP are listed as first and second petitioners in the petition with number PEPT/001/2019 filed on March 7, 2019.

However, at the resumed pre-hearing of the petition on Thursday, the tribunal was confronted with two applications filed on June 18, 2019 by a factional National Chairman of the party, Poland Awinitabre.

Awinitabre, in the first application, wants the tribunal to strike out the name of the HDP from the petition, while in the second he is seeking for a change of counsel representing the party at the tribunal.

On two occasions, Awinitabre had openly disowned the counsel for the HDP and its presidential candidate, Chief Oworu.

When the petition was called, chairman of the panel, Justice Mohammed Garba, drew the attention of the counsel to the various parties to the pending applications.

But while the counsel to the Independent National Electoral Commission (INEC), Yunus Usman (SAN); that of President Muhammadu Buhari, Osaro Eghobamien (SAN) and Charles Edosamwam (SAN); all claimed knowledge of the applications, counsel to Oworu, and the HDP, Oliver Eya, said he was not aware of the said applications.

Eya asked the tribunal to disregard the applications as they did not emanate from his clients.

He specifically told the tribunal that the applications were filed by some busy bodies and meddlesome interlopers who are not known to the petitioners.

This was after acknowledging that the two applications were served on him in court.

However, the counsel to the APC, Edosamwam, drew the attention of the tribunal to a counter affidavit filed by the presidential candidate of HDP and the first petitioner, Oworu, against the two applications.

Responding, Justice Garba said since the applications have become part of the process in the tribunal’s file, it is only pertinent to hear them.

Meanwhile, Eya applied that since the applications were served on him in court, he needed time to respond to them.

In his short ruling, the tribunal held that “in view of the fact that the applications were served on Eya this morning, his request is hereby granted”.

The tribunal consequently adjourned to June 25, 2019 for hearing on the applications.
The Hope Democratic Party (HDP), one of the parties that participated in the last general election conducted by INEC, in the petition, insisted that the February 23 poll is unknown to law and should be invalidated by the tribunal.

In a fresh motion filed by the party’s counsel, Ezechukwu Ifeanyi, the HDP insisted that the February 23 poll was never validly held by INEC and cannot produce any valid result or returns recognizable by law.

Although the party admitted that the electoral body has powers under section 26 of the Electoral Act 2010, it however maintained that no cogent and verifiable reason were produced by INEC to postpone the February 16 election and thereby rendered the February 23 election a nullity under the same law.

HDP, which cited several authorities to buttress its averment, said that since INEC breached the provisions of the Electoral Act especially section 26 to conduct the February 23 poll, the purported election cannot stand in the eyes of the law.

The party therefore prayed for an order compelling INEC to produce at the tribunal notice of election, original timetable for February 16, the press statement of February 16 as well as minutes of meeting where the decision to postpone the February 16 presidential poll was held.

HDP also prayed that the return of President Buhari for a second term in office on account of February 23 election be invalidated and set aside because the election has no force of law. 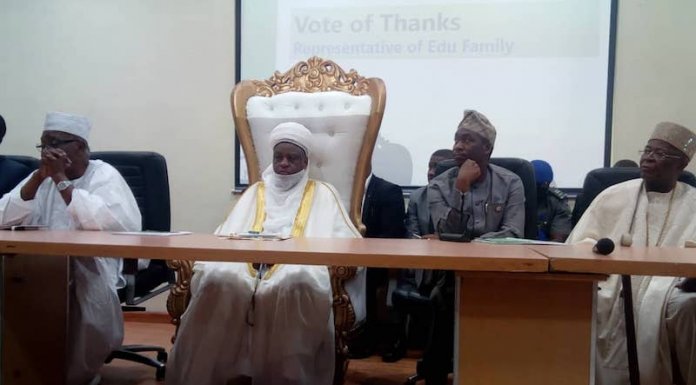