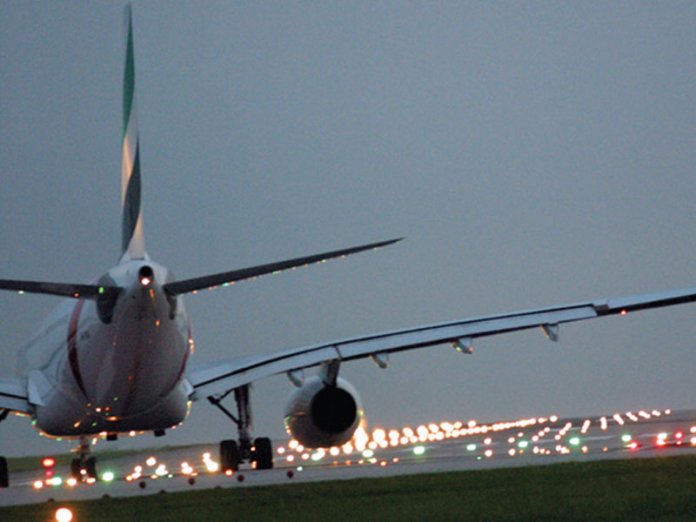 The Benin airport has become a symbol of synergy between the state government and the federal government as Governor Godwin Obaseki’s vision to have a viable aerodrome has improved infrastructure in one of the nation’s busiest domestic airports, writes Chinedu Eze

What is ironic about Benin Airport in Edo state is that it is very close to Lagos; yet, the airport receives more flights daily than airports located far away from the nation’s economic hub and the federal capital territory, Abuja.

THISDAY gathered that domestic airlines always struggle to add Benin to their destination because they usually record high passenger traffic on the route. Before now, the airlines faced a snag. Hitherto, Benin was a day light airport, which means that flights cannot land there after 6:00 pm.
According to airline operators, this was a significant draw back, considering the fact that the airport is located at the centre of the city and therefore secure for passenger movement in the night. Ideally, Benin airport could take in flights till 10:00 pm because there is no security challenge in Edo capital city or around the airport.

But today, that challenge at the airport has been resolved by the Governor of the state, Mr. Godwin Obaseki, who funded and collaborated with the federal government through aviation agencies to realise his vision for the Benin airport.
Today the Benin airport has new and modern Instrument Landing System (ILS). It has airfield lighting and it has Precision Approach Light to enable flights land at the airport in the night, even at low visibility. So the airport remains one of the best-equipped airports in the country in terms of critical infrastructure.

Collaboration
For the upgrade of the airport to 24 hours service facility by the federal government to be actualised, Governor Obaseki had to collaborate with the Nigerian Airspace Management Agency (NAMA), the Nigeria Meteorological Agency (NIMET) and the Federal Airports Authority of Nigeria (FAAN) to ensure that the airport met his vision as a gateway, which is key to the economic development of the state.

Economic Growth
The Edo state government explained that the renewal of the Benin airport infrastructure was part of the plan to open the state for greater economic development, noting that the plan was to ensure that the airport becomes more viable and able to handle higher air passenger traffic. This line of thought, it noted, was anchored on the need to upgrade the infrastructure so it could handle more activities, especially night operations, which will create the room for private investors to do business in the state.

The Airport Upgrade Plan
THISDAY gathered that during a visit by aviation agency heads to the state in September 2017, Obaseki was quick to relay his desire to improve infrastructure at the Benin airport and said as much to the delegation from the federal government, which had the mandate for aviation in the country.
The delegation included top officials of the Federal Airports Authority of Nigeria and the Nigerian Airspace Management Agency.
The now former Managing Director of FAAN, Saleh Dunoma, was with the Managing Director of NAMA, Capt. Fola Akinkuotu, both of whom the governor convinced on the need to forge a partnership to refurbish the airport after the trio inspected facilities at the Benin Airport.

Obaseki, said his administration would work with FAAN and NAMA to develop a plan that ensures the airport space was expanded, especially the runway. He noted that state intends to effectively utilise assets and resources within the state for the benefit of the people, which necessitated the inspection tour of the Benin airport.

According to him, “We have approached the Federal Authority to kindly come to our aid regarding the airport. The plan is to first improve the facilities in this airport and ensure that we have night landing facilities. This will enable the airport embark on 24 hours operation. With more airplanes coming in, we will see a lot more passenger traffic coming into our state.”
Dunoma, noted that though the federal government had the responsibility to improve facilities at the Benin Airport and was excited by the commitment coming from the Edo State government to upgrade the airport.

He said. “I want to thank the governor for coming to our aid and with his assistance we can do a lot more. We have inspected the facilities here and we will submit a report on what we need to do to improve the safety and facilities at this Airport.”
Also Capt. Akinkuotu of NAMA, commended the joint effort made both by the state and federal government on the upgrade, noting that the approach was the way to go to drive meaningful development across the country. He said the agency would collaborate with the Edo State government to ensure passengers do not only feel safe, but also have good reasons to fly to the Benin airport.

“We can’t but thank the Governor Obaseki for coming out to show support. The country belongs to all of us. He has demonstrated great leadership, and by working together, we can move the state forward,” Akinkuotu said.
After the inspection, work commenced properly and the state government constructed three security watchtowers; supplied and built houses for 2 20KVA generators; provided three Toyota Hilux vans to FAAN; facilitated the installation of Category (CAT) II Instrument Landing System/Distance measuring equipment by NAMA.
Also the federal government through Nigeria Meteorological Agency (NIMET) provided Thunder and Lighting System; Met Enclosure and Secure Aviation Date Information System while FAAN provided Enhanced Simple Approach Landing System.

VP, Osinbajo’s Night Flight
One year after the inspection by the top officials of the federal government, some of the equipment for night operations were installed and the Vice President, Prof. Yemi Osinbajo flew from the airport at about 7:00 pm, a development that was unheard of at the airport in the last couple of years.
Speaking after the number two citizen’s take off, Governor Obaseki, assured that the Benin airport would commence full night-time flight operations after the installation of necessary facilities, which were being received in batches then.
According to the Governor, the landing facilities at the Benin airport were already functioning which enabled the Vice President to depart Benin City through the airport few minutes to 7:00 pm.
“We are expecting more night landing equipment to be installed at the Benin airport especially the lights. The contractor has assured us that the lights will arrive before the end of this month, February. We will launch it and have our inaugural night flight to Benin City,” he said.

Other Developments
Last week, the federal and Edo State governments eventually commissioned night landing equipment at the Benin Airport, officially reviving night operations at the 63-year old airport.
Minister of State for Aviation, Sirika, who was elated at the development, commended the doggedness and tenacity of Governor Obaseki in facilitating the commencement of night operations at the airport.
“The operational capacity of the Benin City airport has tremendously improved as we can now guarantee safe landing in reduced visibility and in bad weather condition. Aircraft can now land in Benin Airport at night. No more closure of the Airport by 6 pm.
“We have both ground and satellite-based equipment at the airport in such a way that if the ground base equipment fails, the satellite base equipment will work to ensure safe landing at the airport either in the day or at night,” the minister said.

Speaking on further plans to maximise the use of the airport, Sirika said works have reached an advanced stage in building an Agro-allied Cargo Terminal at the Benin airport, adding that the work on the civil structures has commenced with the support of Governor Obaseki.

“We are bringing a cargo terminal to Benin to facilitate exportation of perishable agricultural products and other produce targeted at foreign markets.”
Noting that the Federal Ministry of Transportation through the Nigeria Meteorological Agency (NIMET) had constructed and donated a meteorological station at the University of Benin (UNIBEN), he said, “The opening of the office is part of the effort of the federal government to boost transportation in Edo State, especially in terms of aviation and weather forecasting. The weather forecasting can also be used by farmers to provide information on when it is a suitable time for planting.”
On his part, Governor Obaseki said with the installation of the equipment and commencement of night landing facilities, the airport would compete with its peers across the world, commending FAAN and NAMA, for their close working relationship with his administration for over a year and a half in ensuring the upgrade becomes a reality.

Benefits
On the benefits of the upgrade of the airport, the state, Obaseki said, “The reason we insisted on upgrading facilities at the Benin airport is that it is one of the five airports with high passenger traffic in the country. With the facilities in place, we can now convince airlines to make night stop-over in the City to further increase passenger traffic to boost the state’s revenue base.”
The governor said equipment commissioned at the airport include thunder and lightning system, Secure Aviation Data Information System (SADIS); Enhanced Simple Approach Lightening System, CAT II and Instrument Landing System (ILS)/Distance Measuring Equipment (DME).
Noting that the state facilitated the construction of two watchtowers to provide military officers with a vantage point for proper surveillance of the equipment and the airport, he said “All this equipment were put together by the officials of NIMET, FAAN, NAMA and Edo State Government. Two 20 KVA generators and plant house were built by the state government as well.”
The governor said his administration was making efforts to ensure the state grows economically, which would be made possible through infrastructural development.

Economic Boom
Aviation Security Consultant, Group Capt. John Ojikutu (rtd), said night operations provide immense economic opportunities for cities with such operations, as it opens up a new vista of businesses for the airlines operating from such airports and also the state’s local economy.
He hinted that Benin Airport was one of the few airports aside Lagos and Abuja airports with night operations, and with the commissioning of the facilities; there are prospects for economic boom in the state.

Establishing e-Commerce Trust on the Journey to Economic Recovery