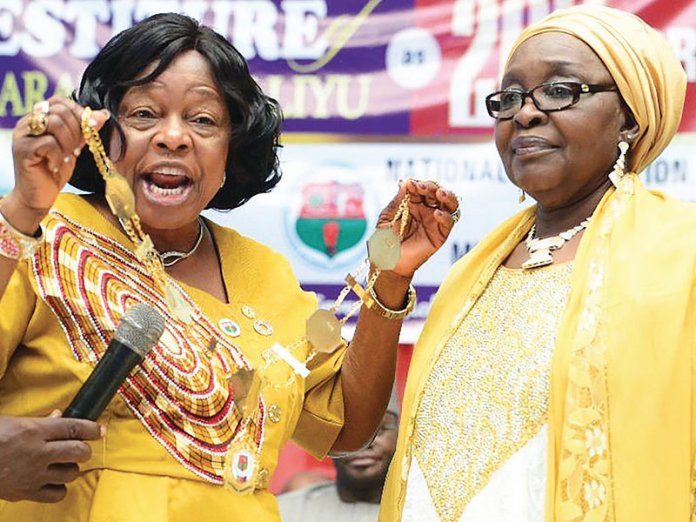 Jonathan Eze writes on the emergence of Hajiya Saratu Iya Aliyu, as the 20th President of the Nigerian Association of Chambers of Commerce, Industry, Mines and Agriculture

At the 59th Annual General Meeting/Conference of National Association of Chambers of Commerce, Industry, Mines and Agriculture (NACCIMA) in Kaduna, Hajiya Saratu Iya Aliyu, was inaugurated as the 20th president of the association.

Aliyu is the first female northerner to assume the leadership of the association.
The occasion, which was chaired by a former Head of State, General Abdusalam Abubakar, also had five state governors in attendance.

Iyalode Lawson handed over to Aliyu after a two-year tenure as its 19th and first female president.
On her part, Aliyu thanked NACCIMA for the opportunity to serve and the confidence reposed in her to pilot the affairs of the association. She promised to continue in the tradition of excellence by strengthening the NACCIMA secretariat and the capability of its staff.

Aliyu, a graduate of education from the Ahmadu Bello University, Zaria, having served the chamber for almost three decades, said the completion of Abuja towers would be a priority to her administration.

The new president acknowledged the fact that the private sector was expected to play a bigger role in the quest for the rejuvenation of the economy for inclusive growth and development and the concerted efforts to reposition the country as one of the leading economies not just in Africa but the world; and also make it works for the well- being of the people.

According to her, “In pursuit of this goal, the private sector has a big role to play and a lot will devolve on us in the chambers movement. Our 59th annual conference thus presents us with another opportunity to rededicate ourselves to the work ahead of us and work closely with government and other members of the private sector for the realisation of our goals and in doing so, we must work together to strengthen our association and rededicate ourselves to the task ahead.”

As part of her planned programme, she identified revenue generation and finance as a challenge.
She said “We must take seriously the issue of our finances. Our current financial situation is not encouraging. We must, therefore, embark on a revenue generation drive to improve the financial profile of the association.
“In this connection, I want to appeal to all Chambers to ensure prompt payment of their dues and those owing must meet outstanding obligations. We must also work on multiple revenue generation activities including training.”
On trade and exhibitions, she stated that they are a veritable platform to showcase capability, urging that they must work on them to serve the purpose they have been created for.

Aliyu also said the association would focus on positioning agriculture as serious business, specifically targeting the youth through the Agriprenuer initiative designed to encourage young people to go into agriculture.
“We are already working on strategic partnerships with research institutions such as the International Institute of Tropical Agriculture (IITA), and FIIRO among others to develop and implement innovative solutions across the agriculture value chain.

“We will vigorously advocate Chambers of Commerce and other private sector stakeholders in States endowed with solid minerals to key into the roadmap for the growth and development of the Nigerian Mining Industry of the federal government.

“We will identify and implement strategies to revive industries germane to the diversification and import substitution agenda of the government; with specific focus on the power, textile and automotive industries. The Association will focus on small and medium enterprises and collaborate with relevant agencies and organisations.”
She also promised to take strategic steps to harness the potential of electronic commerce, digital economy and online commercial activities by strengthening the capacity for online trade and investment as well as enhancing export trade through digital trading.

Not to be neglected too is the creative sector.
She expressed that NACCIMA would develop a closer relationship with stakeholders within the sector to develop and implement a strategic plan to further expand the contribution of the creative industries to economic growth.
“We will continue to advocate the NACCIMA Gender Agenda through the NACCIMA Business Women Group (NAWORG) while we explore new frontiers and options to increase the number of women in the board rooms, promote the involvement of women in all sectors, and advocate improved access to finance for women entrepreneurs.”
The new leadership believes that closer ties with members of the organised private sector and other partners, would help its course.

“Currently we serve as the secretariat of the organised private sector. We will also work closely with other members of the organised private sector, the Manufacturers Association of Nigeria (MAN), the Nigeria Employers’ Consultative Association, the Nigerian Association of Small and Medium Enterprises (NASME) and the Nigerian Association of Small Scale Industrialists (NASSI) to ensure that the private sector in Nigeria speaks with one voice and is focused on the sustained economic growth and development of our country.”
The youths have also been promised support because of the tremendous ability they possess, “we will, therefore, continue to support and guide them; encourage youth entrepreneurship, and increase our engagements with Nigerians in the diaspora as an alternative source for human and capital investment in our economy.

“Internally, we will continue to strengthen the NACCIMA secretariat and the capacity of its staff to be able to meet new challenges that will devolve on them and provide effective support to serve the exco, council, and AGM in carrying out its mandate and navigating the new frontiers.

“These initiatives, and more, will be vigorously implemented and monitored within the context of the NACCIMA Medium Term Strategic Plan (2018-2022) which is serving as a useful guide since its adoption just about a year ago.”, she added.
Towards realising these lofty goals, Aliyu assured of her readiness to work closely with all and carry everyone along.
“We now have a new MEMART which can help us run our Association more efficiently under clear rules and let us be guided by it. And I seek your cooperation in our quest to ensure that we truly continue to serve as the voice of Nigerian business and promote the activities of the private sector in the quest to create the Nigeria of our dreams; a peaceful and prosperous home not just for a few for us all.”

NACCIMA was established in 1960 as the umbrella organisation for all the various affiliate member chambers within the country. The association’s membership is voluntary and it encompasses city, state and bilateral chambers, business/professional association, and corporate Bodies.

It champions the course of business through its advocacy role and influences public policies that promote free enterprise. The perspective of NACCIMA is in accordance with contemporary ideas of the chambers of commerce movement in a relatively free enterprise economy the world over.

President Muhammadu Buhari, who was represented by Governor Abubakar Badaru of Jigawa State, said his government was re-strategising on effectively tackling security challenges in the country.

The president added that the federal government would do everything possible to ease doing business in Nigeria and further make the country investment destination for investors from all over the world.
He restated his administration’s commitment towards boosting business and investment opportunities by reviving train and railway services, building roads and improving on the power sector.

“When this administration came on board in 2015, there are challenges of railway maintenance, power and other issues. Between 24 and 26 states cannot pay their workers’ salary, which was the picture on May 29, 2015.
“But through God’s intervention we continued work on the 300 plus roads that we met, while awarding other 100 plus roads, some are finished, some are ongoing. This is to ease transportation and movement of goods and properties. Railway work is ongoing to move cargoes from one place to another, power is also improving.

“We are improving the ease of doing business to attract investment, in which Kaduna state ranks number one and Jigawa State ranks number two. As a government, we don’t want a repeat of what happened in Angola and Venezuela so we are doing everything possible to diversify our economy,” he said.

The outgoing president in her address, said: “NACCIMA understands the importance of synergy between our associations and stakeholders in the local and international business environment; hence the Conference is an avenue to foster better collaborations and viable networking opportunities for our entities.”