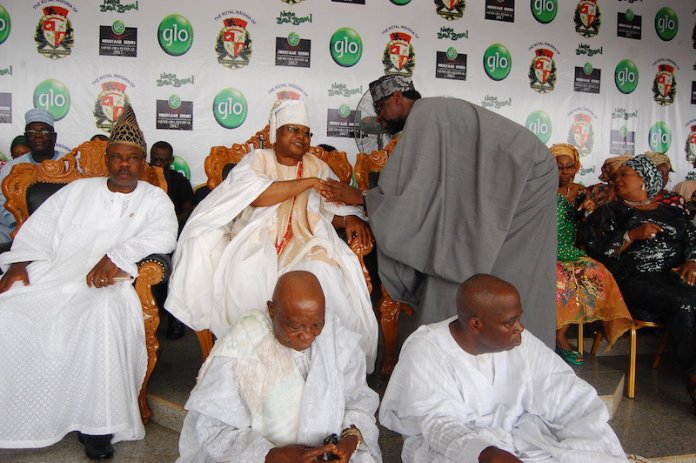 The Chairman of Globacom Nigeria, Dr. Mike Adenuga Jr. at the weekend congratulated the Awujale of Ijebu Ode, Oba Sikiru Adetona, who turned 85 on Friday.

Adenuga recommended the need to inculcate the noble values of honesty, hard work, integrity, probity and good character, for which the monarch is known.

The monarch made the remarks in a goodwill message he delivered at the third annual Oba Adetona Professorial Chair Lecture of the Olabisi Onabanjo University, Ago Iwoye.

Adenuga, who was represented by the current occupier of the professorial chair, Prof. Ayo Olukotun, said the noble values enshrined in the Omoluabi paradigm would help entrench good governance in the country.

In the South-west, according to him, Omoluabi is a cultural concept of the Yoruba people used to describe a person of diligence and integrity.

Adenuga described the theme of the Lecture “Grassroots Governance, the soft underbelly of Nigeria’s political architecture”, as apt, saying if the country “gets it right at the local government level, we will get it right at the top as all politics is local.”

He commended Adetona for donating the professorial chair at the Olabisi Onabanjo University, which he said, had been generating seminal ideas for the enthronement of good governance in the country.

He prayed for more successes during the reign of the monarch who is marking 59 years as King.

Also at the lecture, Adetona expressed happiness to be alive to witness the occasion, thanking God, the people of Ijebuland and Globacom for the huge support that has birthed great development and progress in his domain.

He prayed especially for long life, good health and continuous progress for Adenuga.

Also speaking, Olukotun submitted that local governments in the country had failed and should be replaced because of the manifest development gaps in the country.

He challenged Nigerians to provide redemptive alternatives to what is currently extant.In his address, the Chairman, Board of Trustees of the Professorial Chair, Mr. Olatunji Ayanlaja recalled the first lecture, which according to him, was delivered by Prof. Akin Mabogunje in 2016. The lecture x-rayed the role of money in politics.Ayanlaja added that the second lecture presented by Olukotun looked at the role of civil societies in the entrenchment of good governance in the country.

He announced that Oba Adetona had created a N1 billion Trust Fund of his personal money for the maintenance of the Awujale’s Palace in perpetuity.

He added that the official residence and the office of the Chair of Oba Sikiru Kayode Adetona Professorial Chair on Good Governance at the Olabisi Onabanjo University would be ready for commissioning in three months.

“We are Ready to Discuss Worship Guidelines with FG”