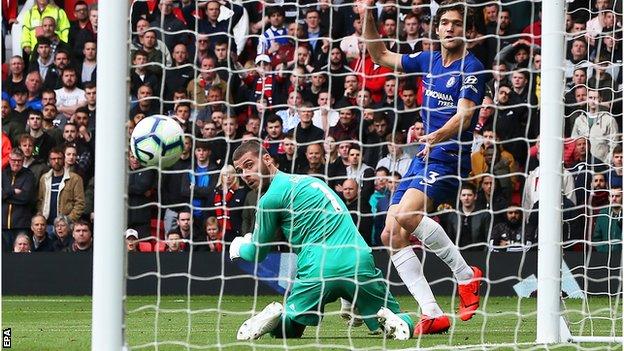 A mistake by goalkeeper David de Gea gifted Chelsea an equaliser as Manchester United’s hopes of playing in next season’s Champions League were dented at Old Trafford yesterday.

It was a costly error by the Spaniard, whose form has come under scrutiny in recent weeks, although De Gea did come to his side’s rescue deep in stoppage time to deny Gonzalo Higuain a dramatic winner.

Up until Chelsea’s equaliser, United had been in control yet they remain sixth in the table, three points behind fourth-placed Chelsea with two games to play, after a third successive league game without a win.

In a competitive game, both teams suffered injuries.

After Rudiger was forced off in the 64th minute, United defender Eric Bailly, who was making his first league start since 3 February, was helped off six minutes later.

With two games of the season left – and United’s hopes of qualifying for next season’s Champions League now out of their own hands – Ole Gunnar Solskjaer is facing a dilemma regarding his goalkeeper.

The United boss had to defend De Gea before this game because of the Spaniard’s shaky form.

He was culpable for at least one of Manchester City’s two goals in United’s midweek derby defeat at Old Trafford, having been at fault for Lionel Messi’s second in the 3-0 defeat at Barcelona in the Champions League on April 16.

“He’s for me been the best player United have had for the last six or seven years,” said Solskjaer ahead of Chelsea’s visit. “He has been absolutely outstanding – going through tough patches is part of a footballer’s career and David will be fine.”

But De Gea was anything but fine as Rudiger let fly from 30 yards with Chelsea’s first shot on target two minutes before the interval.

It looked a routine save for a player of De Gea’s ability, but the ball spilled from his grasp and Alonso reacted quickly to tuck home his first Premier League goal since 18 August.

His save to deny Higuain in the dying moments, with the Chelsea forward clean through, saved United from defeat but De Gea’s inconsistent form remains a worry.

United had Sergio Romero on the bench against Chelsea. The Argentine has not made a Premier League appearance since 13 May 2018 when he kept a clean sheet in a 1-0 win against Watford.

It remains to be seen whether he will be called into action before the end of a disappointing season in two weeks time.

With Tottenham losing at home to West Ham on Saturday and Arsenal losing heavily at Leicester earlier on Sunday, this result means none of the teams placed between third and sixth won over the weekend.

For United, they will hope the teams above them keep dropping points as they look to avoid missing out on a top-four spot for the third time in four seasons.