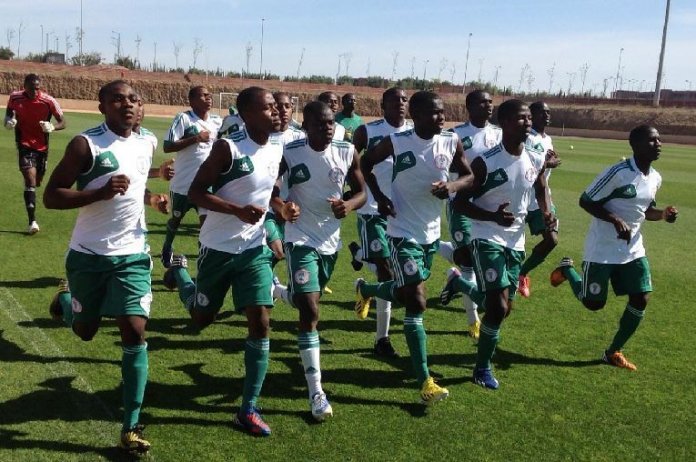 With the Nigeria Professional Football League not seen as good enough to produce players for the Super Eagles, the football federation largely depends on players of Nigerian descent to star for the senior national team in what the NFF president, Amaju Pinnick described as VIP Scouting. Very soon Nigeria’s U-17 team would be flooded with ‘foreigners’ after the NFF boss convinced Chelsea prodigy Adrian Akande to commit his international future to Nigeria over England and is expected to be named for the upcoming Africa U-17 Cup of Nations in Tanzania

Chelsea prodigy Adrian Akande has committed his international future to Nigeria despite being courted by the English Football Association.

Golden Eaglets coach, Manu Garba closely monitored the highly-rated winger in Abuja for about one week, with a view to naming him on the roster for the upcoming Africa U-17 Cup of Nations in Tanzania.

Akande arrived the Nigeria U-17s camp with a huge reputation, having scored an impressive 30 goals in 42 games for Chelsea’s youth teams this season while providing 22 assists.

‘’Adrian has been called for five England camps and has rejected all of them in hope of playing for Nigeria,’’ Adrian’s agent, Tobi Alabi who used to play for Millwall, told an online publication.

Akande has certainly shown signs that he could cut it as a professional footballer as he has drawn comparisons to Chelsea superstar Eden Hazard and Barcelona’s Ousmane Dembélé.

‘’He plays like Hazard and Barcelona’s Dembele. He is two-footed, very quick and strong on the ball. He can score the same, with both right foot and left foot and he is a hard worker.

Akande played for the youth team of Crystal Palace before transferring to Chelsea at the age of 12.

Akande who flew back to Nigeria on Wednesday night is expected to undergo an MRI test this week.

Nigeria Football Federation President, Amaju Pinnick, played a key role in convincing the precocious talent to commit his international future to Nigeria over England after holding talks with the player’s camp.

Since assuming office as the President of the NFF, Pinnick had never hidden his intention to woo players with Nigerian background who have featured only in age-group competitions for foreign countries. So far, he has not done badly with his moves.

“The initial plan was to take our players in the various clubs, but now, what we are trying to do is what we call VIP scouting – talking to these young players that are playing abroad to play for their fatherland.

“I am yet to see a Nigerian that is regretting being a Nigerian. No Nigerian, even if they have four or five passports, they are always excited being Nigerians. I can assure you that we shall get them to play for us at the appropriate time,” Pinnick said.

Meanwhile, Bournemouth goalkeeper Joseph Oluwabusola is set to miss out on the Golden Eaglets roster to the upcoming Africa U-17 Cup of Nations which begins in Tanzania on April 14.

Although the Golden Eaglets coaches have refused to categorically rule him out from the squad set to be announced in the coming days, his chances are slim because he has not trained with the team since the start of their training camp.

Bournemouth had earlier assured the Nigeria Football Federation that Oluwabusola would be permitted to link up with the Nigeria U-17s 14 days before the start of the tournament but this has not happened.

He was a member of the Golden Eaglets squad at the 2018 WAFU-UFOA Zone B qualifiers for the Africa U-17 Cup of Nations but did not come off the bench in all their four matches in Niger.

Akande, Go Ahead Eagles’ Lateef Omidiji and Barcelona Escola whizkid Kelechukwu Ebenezer Ibe-Torti are among the foreign-based teenagers observed by Garba ahead of their trip to Tanzania for the U-17 AFCON.

The five-time world champions will do battle with the hosts, Angola and Uganda in the group stage.

Army Warns Personnel against Use of Social Media to Engage Authorities