As mark of respect for Hon Temitope Olatoye, representing Lagelu/Akinleye constituency of Oyo State, who was shot dead last Saturday in his state during the governorship and state House of Assembly elections, the House of Representatives which reconvened yesterday adjourned till today.

Gbajabiamila gave the hint immediately after a meeting of the APC caucus held at Room 1, House of Representatives wing of the National Assembly.

He said the issue of the next leadership was not yet in the front burner among members of his party, and gave assurances that APC members will abide by any position taken by the party leadership.

“We are not focused on that right now. It is very important but we have left that. The party will take a decision on which way it will go.

“As we concede to emergence of democracy, we will concede to party supremacy of the party,” Gbajabiamila said, acknowledging that his party will have majority in the next assembly.

He said the recent 2019 presidential and National Assembly, governorship and state Houses of Assembly elections, had come and gone.

He added, “We condemn those who perpetrated violence in pockets of places and regret the loss of lives. One life that is lost is one life too many.

“Our caucus believes strongly that there is no victor and no vanquished, and victory only belongs to democracy and the Nigerian masses. We congratulate the president, all players and stakeholders.

“We congratulate our party, the APC. We congratulate the Peoples Democratic Party (PDP) and other parties for their remarkable showing and competitiveness. Our democracy is better for it. We congratulate INEC. Despite the hiccups, the electoral umpire gave us fairly credible elections.”

“As a country, we must strive for perfection and try to do better. In this regard, the legislature is key in retooling the electoral laws and processes, and perfecting them going forward,” he said.

Announcing the adjournment, the Speaker, House of Representatives, Hon. Yakubu Dogara who bemoaned the lawmaker’s death said: “It is unfortunate. We lost a member; we will take the prayers and we would adjourn as it is the custom.”

Dogara, wrote in the condolence register that the late Temitope was “a fantastic, lively and super active member and colleague. No one should die in the circumstances of your death on a day you exercised your civic duty.

“We love you but God loves you even more. I feel the pains of your departure but the works you have done while alive will continue to bear witness to the kind of person you were. Rest in peace.”

While the Deputy Speaker, Hon. Lasun Yusuf prayed that the soul of the departed lawmaker rests in perfect peace, Gbajabiamila stated that “I am still in shock as is the whole House. You will be missed and I pray that you will rest in peace.” 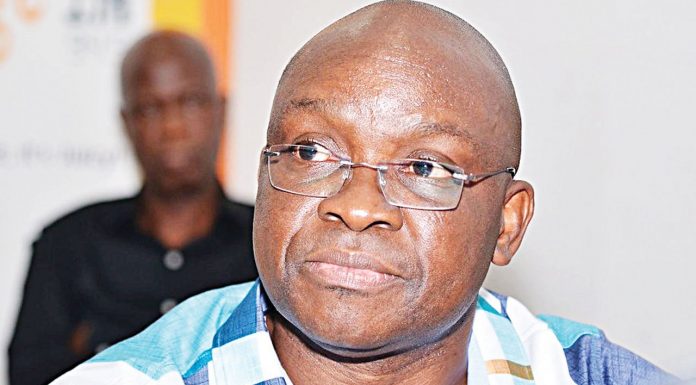 Tokunbo Abiru: Why I Want to Serve Lagos East as Senator