The Code of Conduct Tribunal (CCT) has deferred rulings in the two motions of the Chief Justice of Nigeria (CJN), Justice Walter Onnoghen, challenging the jurisdiction of the tribunal to hear the criminal charges brought against him by the federal government.
Also deferred is ruling in another motion in which Onnoghen prayed for the disqualification of the tribunal Chairman, Mr. Danladi Umar, from participating in the trial on account of demonstrated bias.

Delivering ruling in the two motions argued yesterday by Chief Adegboyega Awomolo SAN, on behalf of Onnoghen, the CCT chairman announced that rulings had been reserved and shall be delivered along with the substantive suit.

Umar, also in the short ruling, invoked section 296(2) of the Administration of Criminal Justice Act to arrive at his conclusion, adding that in line with the provisions of the law, ruling in all motions shall not be delivered until the final judgement of the main matter.

Besides, Umar ordered that proceedings against Onnoghen shall be conducted on a day-to-day so as to ensure speedy trial of the charges.
He consequently fixed today for continuation of the trial even without consulting the prosecution and defence Lawyers.

Earlier, the Chief Justice of Nigeria (CJN), who has been suspended from office by President Muhammadu Buhari, insisted that the CCT has no jurisdiction to proceed with the six-count charge brought against him by the federal government.

Onnoghen told the tribunal that as a serving judicial officer, it is the National Judicial Council (NJC) that is vested with powers to entertain any misconduct against him.
In a motion dated January 14, 2019, Onnoghen through his counsel, Awomolo, prayed the tribunal to strike out or dismiss the entire charges against him for want of jurisdiction.

Awomolo, cited sections 34 and 292 of the 3rd scheduled of the 1999 constitution as grounds that the CCT has no requisite power to deal with erring judicial officer without first resorting to the NJC.

He said the powers of the National Judicial Council are superior to that of the Code of Conduct Bureau when it comes to the issue of judicial officers, adding that in line with section 292, the NJC must first indict a judicial officer before any judicial measure can be taken.
The senior lawyer, reminded the tribunal that it had earlier recognized this position last year, when it declined to assume jurisdiction in the case of federal government against Justice Sylvester Ngwuta a Supreme Court Justice, based on the Court of Appeal decision that ordered that serving judicial officers must first be referred to the NJC in matters of misconduct before prosecution in any other court.

Awomolo accordingly urged the tribunal to maintain his earlier decision by striking out the charges against Onnoghen.
In the second application dated January 31, 2019 and predicated on section 36 of the 1999 Constitution as altered, Onnoghen demanded that the chairman of the tribunal recuses or disqualify himself from further participating in the trial on the grounds of fair hearing and likelihood of bias.

The defendant claimed that Umar had demonstrated sufficient bias against him in the conduct of proceedings and that it would be in the best interest of justice for the CCT boss to step aside from the proceedings.

Onnoghen stated that in the instant case, the executive arm of government, where Umar belongs to, is the complainant, investigator, prosecution and the judge contrary to the provisions of the law.

Responding, counsel to the federal government, Mr. Aliyu Umar SAN, however, urged the tribunal to dismiss Onnoghen’s application on the grounds that the application lacked merit.
He said there is a difference between a judicial misconduct and failure of a public officer not complying with the provisions of the Code of Conduct Bureau, adding that in the case of Ngajinwa cited by the defendant, Ngajinwa was accused of bribe taking, while the defendant in this case is charged with violating constitution provisions.
Meanwhile, hearing of the matter continues today. 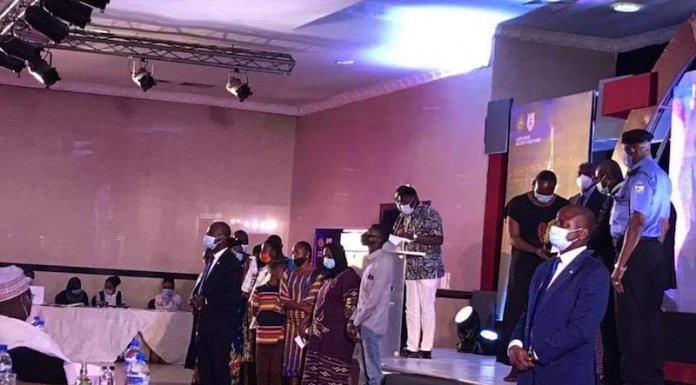