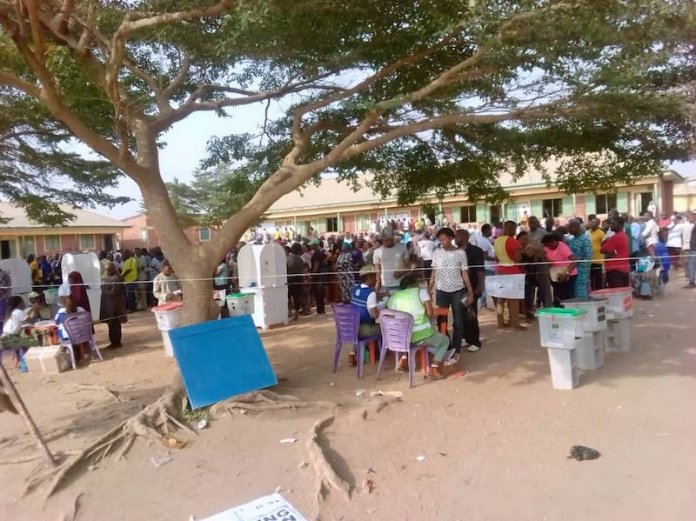 A coalition of Independent National Electoral Commission (INEC) – accredited foreign and local observers, and notable leaders in Enugu State have commended the successful conduct of Saturday’s governorship and House of Assembly elections in the state, describing the exercise as “peaceful, free and fair”.

This came as results trickling in from polling units across Enugu State indicate the state governor and governorship candidate of the Peoples Democratic Party (PDP), Rt. Hon. Ifeanyi Ugwuanyi, and House of Assembly candidates of the party are coasting to victory as the PDP leads with wide margins.

Gov. Ugwuanyi who voted at exactly 9:35am, after trekking from his residence to the polling unit, said that “in all we do in Enugu State, we give God due glory, honour and adoration and by the special grace of God this election will end in praise”

Speaking on behalf of the observers, shortly after Gov. Ugwuanyi cast his vote at his Amube Ward II Polling Unit, a foreign observer from Nigerians in Diaspora Organization (NIDO), Rotarian Titus A. Alagba, stated that the election was in conformity with the INEC rules and regulations, and thanked Gov. Ugwuanyi for “providing the peaceful atmosphere for this free and fair election”.

Also speaking, the President-General of Ohanaeze Ndigbo, Chief Nnia Nwodo, who spoke to journalists after voting at his polling unit in Ukehe Ward I, disclsoded that the election “was very peaceful, very orderly and it typifies the peaceful character of our state.”

The former governor of old Anambra State and chieftain of the PDP, Senator Jim Nwobodo, added that the exercise “has been peaceful”. Senator Nwobodo expressed optimism that “PDP will win with a landslide in Enugu State”, saying: “After the result of the last election. If you can see there is no other party here. It is just PDP all through”.

Applauding Gov. Ugwuanyi for the peaceful atmosphere in the state, the elder statesman, who was accompanied to his polling unit by his wife, Pat, said: “This governor is a man of peace and because he is a man of peace, there is peace everywhere in this election. So, I think it will end in praise”.

On his part, the Archbishop of Enugu Ecclesiastical Province, (Anglican Communion) Most Rev. Dr. Emmanuel Chukwuma, commended Gov. Ugwuanyi, INEC and the security agencies for the peaceful conduct of the exercise, maintaining it was “orderly, very much peaceful, free and fair”.

The cleric equally lauded Gov. Ugwuanyi “for the way he has been able to hold Enugu State peacefully without discrimination, no party in Enugu will say that probably the ruling party has suppressed them at all”.