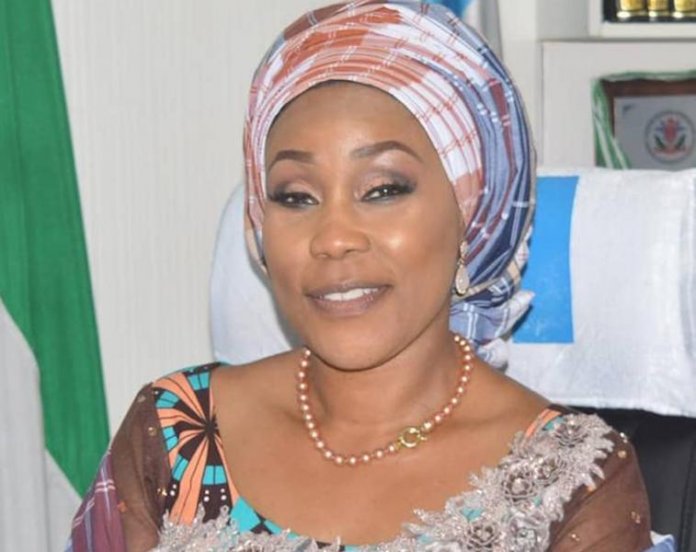 For the kind of work she does and the menace she grapples with, you do not expect to see a serenely adorable woman. She wears a touch of smile that embodies her passion for humanity. With an endearing mien, she goes about her daunting duties with unrelenting fervour. Meet the Director-General of the National Agency for the Prohibition of Trafficking in Persons (NAPTIP), Julie Okah-Donli. Her activities at the helm of affairs of the agency have put Nigeria on the global map in a positive light. Cerebral and committed, under her watch over 13,000 traffic victims have heaved a sigh of relief. With the impressive achievements of the agency in the last one year, Okah-Donli is more than determined to keep restoring dignity to humanity, writes Funke Olaode

Julie Okah-Donli’s love for her fatherland is unquenchable. Beaming with confidence, her mission was clear as the Cable News Network (CNN) beamed its searchlight on human trafficking in Sub-Saharan Africa with focus on Nigeria at a Forum on Human Trafficking, anchored by Richard Quest of CNN in Italy sometimes in 2018. Sitting among a panel of discussants mostly Europeans whose mission was to discuss human trafficking and how it could be curbed.

She boldly made it clear to her counterparts that pointing accusing fingers is not going to help. Rather, that the destination countries must give full disclosure during information sharing about the traffickers, and they must be prosecuted from both sides, there should be joint investigations and operations between countries.

Human trafficking in sub-Saharan Africa has frequently grappled global attention and no end seems to be in sight. But in the past one year, Okah-Donli has hit the ground running with one mission, to rid the nation out of this global phenomenon.

That Okah-Donli is passionate about her job is an understatement. The author of ‘Parenting in the 21 Century’ has always been an advocate for women and children’s rights, protection of children from all forms of abuse such as sexual and physical.

In recent time, NAPTIP as an agency seems to have come into the limelight, she said the agency’s intention is not to play to the gallery but to achieve its aims and objectives.

“There is no magic in the unveiling of NAPTIP as an agency. NAPTIP was created by the Federal Government of Nigeria in 2003 in response to the disturbing issues of human trafficking. It is one of the agencies under the supervision of the Federal Ministry of Justice. The agency is mandated with the coordination of all laws on trafficking in persons, work in collaboration with other law enforcement agencies, relevant organisations and institutions in the fight against human trafficking, and carry out awareness creation on the dangers of human trafficking. “NAPTIP is further tasked with investigation and prosecution of offenders, counselling, rehabilitation and reintegration of victims, and researching into current issues and trends in trafficking in persons. The agency has different department performing various functions. It also has range of powers. What is going on now is that we have taken steps to unveil the agency by exercising all powers conferred on it by the enabling law that created it. Also, under the present administration, the agency has become more proactive and more responsive to Nigerians,” she said.

NAPTIP has an agency has been able to record great feats since its creation and also within the last one year which could be attributed to the collective efforts of Officers and Men of the Agency as well as collaboration of its partners and stakeholders.

“To make it more effective, zonal offices were created across the geo-political zones, massive awareness creation and enlightenment programmes that have brought the issues of human trafficking into the limelight thereby drawing global attention to the phenomenon. Of significant note were over 13,000 victims who have passed through the NAPTIP shelters.

“Today, they didn’t have only psychological support, they were also provided with skills, education, medical supports, empowerment, reunited and reintegrated into their families and society. We have many victims who have graduated from tertiary institutions. In fact, last year, three of such graduated from the universities, with one having a second class degree upper division in Accounting. These are all under the sponsorship of NAPTIP and three of them are now employed and working in various zonal commands of NAPTIP,” Okah-Donli disclosed.

“Development and publication of the National Policy on Protection and Assistance to Trafficked Persons in Nigeria; this document has been adopted by ECOWAS Member States for care and support to victims of human trafficking; development and publication of a guideline on National Referral Mechanism for Protection and Assistance to Trafficked persons in Nigeria. NAPTIP has become a training ground for other countries including European countries to learn good practices in the fight against human trafficking as a number of them now send officials on study tour of NAPTIP with a view to establishing a similar agency in their countries; commenced a 30-minute news magazine programme on television on NTA International at 8.30 pm on Wednesdays,” the NAPTIP boss added.

Hardworking, passionate and committed to duties, Okah-Donli always has her ears to ground. Nigeria recently was in the eyes of the world following the revelation that some Nigerians were trafficked and trapped in Mali. She said the development was informed by the visit of a fact-finding team she sent to Mali last December.

She explained: “The agency had been receiving series of calls and reports from stakeholders and even trafficked victims in Mali over their painful exploitative conditions. As a responsive agency, we cannot afford to look away while our promising youths mostly girls are being subjected to servitude and forced prostitution not only in Mali, but anywhere around the world. So we decided to send a delegation made up of members of National Assembly, Officers and Directors from NAPTIP, the Media and of course some personnel of the International Organization for Migration (IOM) in Mali. The report that was brought back by the delegation was emotionally devastating. They visited few of the identified areas where our girls are being sexually exploited precisely the mining regions of the Country. The team found out that an estimated population of over 20, 000 Nigerian girls are strongly suspected to be trapped in the regions. “They are clustered in make shifts nylon shanties where the sexual exploitation is taking place without access to medical care and other necessities. Painfully, few of them were said to have been sighted in their school uniforms which simply implies that they may have been abducted on their way either to or from school. A few of them said to be trafficked to the Northern part of the country are said to be radicalized by the terrorists thereby posing serious danger to not only Nigeria, their home country, but the entire Africa.”

The NAPTIP boss explained further: “We have commenced plans to bring them back to Nigeria. In the first place, this type of operation cannot be carried out alone, hence we have opened discussions with the Ministry of Foreign Affairs and other relevant MDAs, Office of the National Security Adviser (ONSA), Nigeria Embassy in Mali, Embassy of Mali in Nigeria, IOM, Interpol and other international partners. So, within the next few weeks, another delegation shall be visiting Bamako for serious discussions on evacuation with the Malian authorities. The team shall also commence profiling of the girls with a view to determining those that would be evacuated bearing in mind that we cannot force them back.”

“NAPTIP seeks to build upon the momentum from 2018, to consolidate on its efforts and ensures a robust national response to the scourge of human trafficking in Nigeria. We shall increase our awareness creation and public mobilization with a view to ensuring behavioural changes especially among youths and even parents,” she said.

“We shall devote more efforts at sensitizing the rural dwellers and also increase our networking with partners and other stakeholders. We have finalized plans to inaugurate anti-human trafficking task force in all the states of the federation, as well as reinforce partnership with the local government authorities, public and private sector as part of our grassroots counter-trafficking strategies.”

Born on December 30, 1966; an indigene of Bayelsa State, Okah-Donli has a degree in Law from the Ahmadu Bello University, Zaria and was called to the Bar in 1992. In 1990 while at ABU Zaria, she won the Dean of the Faculty of Law Award as the winner of the Moot Court competition.

A woman of many parts, she had held many positions in the government and in the private sector. She was a manager at Securities & Exchange Commission (SEC); company secretary/legal adviser at the Nigerian Capital Market Institute; and head of the Abuja regional office of the UBA Trustees Plc. She was the deputy head of chambers of Legal Resources Alliances; executive assistant to the Governor of Bayelsa State between 2007 and 2012; and the principal partner at Julie Okah & Co. She is also a philanthropist engaged in a number of charity works and the founder of Julie Donli Kidney Foundation.

When she is not busy, this amiable mother of two relaxes by playing gulf and hanging out with friends. But more than relaxation, her thoughts are always focused on the menace of trafficking in Nigeria.

“There is so much evil going on in the world, parents must be very vigilant at all times to protect their children from being trafficked or abused,” Okah-Donli lamented.