A wave of redeployments Wednesday hit the police hierarchy as the acting Inspector General of Police, Mr. Mohammed Adamu, approved the transfer of over 50 senior officers less than 10 days to the presidential election scheduled for February 16.

Although a statement by the spokesperson of the Police Service Commission (PSC), Mr. Ikechukwu Ani, said the postings were approved by the commission following recent promotions in the force, the Peoples Democratic Party (PDP) raised serious doubts about the motive of the exercise, contending that it was aimed at using the police to manipulate the impending general election.

However, a statement by Force Police Public Relations Officer, Mr. Frank Mba, said the deployments were made following the decoration of newly promoted officers within the ranks of Assistant Inspector General of Police (AIG) and Commissioner of Police (CP).

One of the postings that became immediately controversial yesterday was the promotion and posting of Mr. Kayode Egbetokun, former chief security officer (CSO) to Senator Bola Tinubu while he was governor of Lagos State.

Egbetokun had earlier been redeployed to take over from Mr. Imohimi Edgal as Commissioner of Police, Lagos State Command last year by the former police boss, Mr. Ibrahim Idris. But the retirement of Idris put paid to that as the new boss, Adamu halted the handover process that had begun.

Now, Egbetokun has been moved to Kwara State Command as CP, sparking a wave of protest from the PDP, which alleged Wednesday that it was a ploy to oust Senate President Bukola Saraki, from his dominance of the state’s politics.

Mba had in a statement reeled out a long list of deployments involving the newly decorated senior officers Thursday.

In all, 18 AIGs got new postings while 35 CPs were deployed in the state commands.

With the development, Lagos now has a new police boss, Mr. Mu’azu Zubairu, who will now take over from Edgal

According to the Commission, the CPs are expected to proceed immediately to their new commands ahead of the 2019 general elections.

The Chairman of the commission, Alhaji Musiliu Smith, according to Ani’s statement, charged them to quickly settle at their new posts and ensure that the forthcoming general elections in their various commands are peaceful, free, fair and transparent. 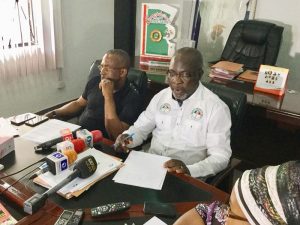 Meanwhile, the PDP and the Coalition of United Political Parties (CUPP) Thursday threatened to pull out of the peace accord over alleged plot by leaders of the All Progressives Congress (APC) to manipulate the general election, using different unholy and undemocratic means.

Consequently, PDP and CUPP warned that any situation that seeks to allow the ruling party to abuse the tenets of the accord would definitely force them to review their signatories to the peace process.

At a press conference Wednesday in Abuja, the Director of Media and Publicity of the PDP Presidential Campaign Council, Mr. Kola Ologbondiyan, stated that it might have no option than to allow its members to defend their votes with whatever that is available to them.

He stressed that the country belongs to all, noting that no individual or group, no matter how highly placed, could subjugate other citizens or seek to appropriate any sort of absolutism to themselves.

Ologbondiyan said, “After due consideration of comments, threats and incendiary actions by the All Progressives Congress (APC) and the Buhari Presidency, which are directly inimical to peaceful, free and fair elections, the PDP is left with no option than to consider a review of its signatory in the national peace accord, if no action is immediately taken to curb this trend.”

Accuse APC Leaders of Plotting to Stop Saraki at all Costs

The PDP also accused the ruling party and the police of planning to stop the re-election of Saraki and some other members of the opposition party at all costs.

The PDP spokesperson alleged a plot to redeploy Egbetokun, as Kwara State Commissioner of Police, where he has been handed the instruction to allegedly ‘’incite the people’’, cause pandemonium and pave the way for outright rigging in favour of Buhari and all other candidates on the platform of APC.

This, he said, was in line with plans by the presidency and the APC to effect a mass deployment of top security officers, particularly the police, to “intimidate, harass and manhandle’’ Nigerians that will not support the self-succession bid of Buhari, as well as aiding APC thugs to snatch ballot boxes and orchestrate violence in the elections.

Ologbondiyan noted, “It is necessary to state that the PDP is a party of peace and we are committed to the peace accord.

However, the deployment of the Kayode Egbetokun as Kwara CP directly negates the principle of the peace accord and can only hurt the fragile peace that currently exists in Kwara State.

“We wish to remind the acting Inspector General, Mohammed Adamu, that his acceptability among Nigerians across party line was based on the pedigree, which was presented to Nigerians before his appointment,” he said.

On its part, CUPP said that it had received credible intelligence that police posting for the purpose of providing election security has been compromised by the police hierarchy in favour of the ruling APC.

The spokesperson for CUPP, Mr. Imo Ugochinyere, in a statement issued in Abuja yesterday said that designated members of the ruling party have been requested to make their choice of Commissioners, Area Commanders, Divisional Police Officers, SARS Commanders, Rapid Response Squad Commanders, MOPOL Commanders and other strategic positions in the police force.

According to him, “The manipulation includes asking selected and designated leaders of APC to choose the officers that will work with them. This manipulated posting of police officers in line with the choices of politicians of the ruling party, is an invitation to anarchy and a recipe for disrupting the elections, which the federal government has been working towards as their alternative option when all their rigging mechanisms fail so as to perpetuate President Muhammadu Buhari in office.”

He lamented that the new Inspector General of Police has succumbed to their ploy and is now taking instructions from APC on police postings.

He said: “The presidency has deliberately kept him in acting capacity so as to use his confirmation as a bait to get him to do their bidding. He is now completely at their beck and call and their usual line to him are: we will talk to the President about your confirmation, that you really helped us.

“These politically tainted police postings are invitation to a bloody electoral crisis and must be reversed immediately.”