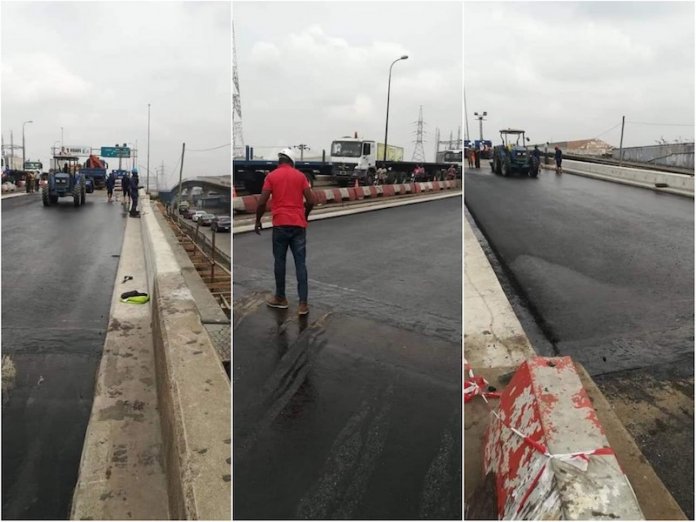 After closure for over one year, the Federal Ministry of Power, Works and Housing on Wednesday reopened the Apapa/Leventis Bridge to traffic.

The News Agency of Nigeria (NAN) recalls that the bridge was closed for emergency repairs in August 2016 after a portion of the bridge deck damaged by fire caved in.

Some of the reinforcement rods on top of the bridge’s centre had become exposed as the asphalt covering them had been eroded.

It was re-opened to light traffic after the emergency repairs and later shut in 2017.

The permanent repairs began in 2018 after Julius Berger, the contractor on the project, imported some materials to aid the repairs.

The 40-year-old bridge links Nigeria’s premier port to both the Lagos Mainland and Island.

While performing the tape cutting ceremony to open the bridge, the Director Highways, South West, Mr Funsho Adebiyi, said that the opening would ease gridlock on the Apapa axis.

“It is my pleasure to open this bridge in the name of God the Father, Son and Holy Spirit. Today we are having a new bridge as well as a new access road. So, hopefully gridlock will end here,” he said.

He said that government was going to take drastic action against all forms of abuses that would cause damage to bridges in Lagos.

The Federal Controller of Works in Lagos, Mr Adedamola Kuti, said that the bridge was damaged in 2016 due to “activities of some miscreants living under the bridge’’.

“When the contractor came on board and removed the slab, that is the deck that got damaged, we discovered that the beams carrying the weight of the slab itself had been affected by the fire.

“So, there was no way we could go ahead with the replacement of the slab, other than for us to start from the beams. So we had to produce new distress beams, and then, of course, the slabs.

“And we have also done the surfacing of the other adjoining slab close to the damaged one,’’ he said.

He thanked residents for their patience during the period of closure of the bridge and pledged Federal Government’s commitment to continued maintenance of all the roads and bridges in Lagos.

He listed bridges that had been repaired to include the Marine Beach Bridge, Coconut Bridge and Ijora 7Up Bridge.

He added that work was ongoing on the Alaka Bridge in Surulere and the Third Mainland Bridge.

He further explained that repair works were ongoing on Lagos-Ota-Abeokuta, Lagos-Ibadan, Ikorodu-Sagamu Expressways and some other federal roads in the metropolise.

“We have completed the Adeniji Adele bound, we are working on the Mainland bound. So the repair works on the Third Mainland will start very soon because our materials are on the way,’’ he said.

Speaking on the newly installed beams on the Apapa/Leventis Bridge, Mr Thomas Balzuweit, Julius Berger’s Regional Manager, said that experts were used to get “a comprehensive design study to get high quality materials“.

Balzuweit added that various quality control checks were done before installing the beams to ensure structural integrity of the bridge to cater for the huge vehicular traffic on the axis.

Alhaji Wasiu Olowuntoye, President, Container Truck Owners Association, who led a delegation of truck drivers to witness the opening, said that the hardship to truck owners would be minimized.

“We are happy today because our members have suffered so much, they spend several days and sometimes weeks trying to go in or out of the ports but with this bridge opened, there will be good for traffic flow,’’ he said. (NAN)