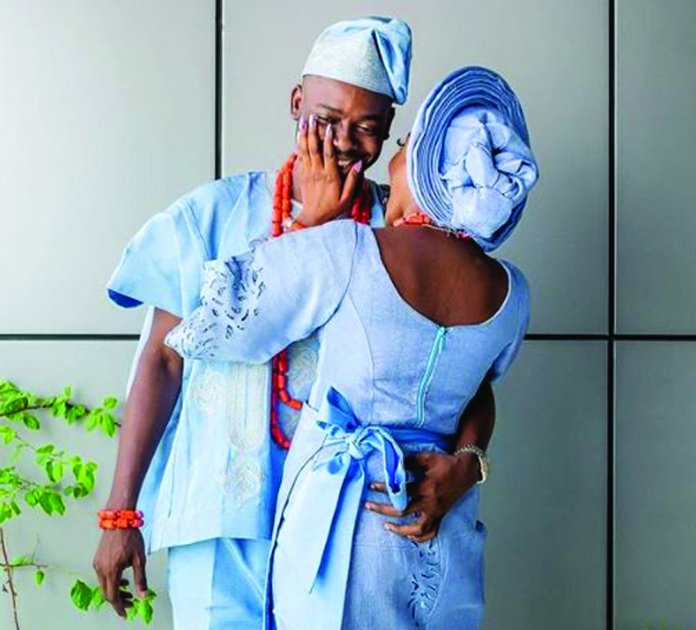 It’s been from one celebration to another for musicians/songwriters, Simisola Ogunleye (Simi) and Adekunle Kosoko (Adekunle Gold) who recently got married. Simi spent most of the week celebrating her hubby at 32, writes Ferdinand Ekechukwu

Simi and Adekunle Gold got married in a private wedding ceremony which surprised fans and admirers earlier in the year, with 300 guests in attendance, mostly friends and close family members. Since then, it’s been from one form of celebration to the other for the celebrity couple. The award-winning Simi took to her Instagram account to convey sweet words to her singer husband on Monday, January 28.

Celebrating her husband on his 32nd birthday, with official photo from their wedding which she posted on her page, the velvety voice artiste wrote: “Light of my life. I love you. I also really like you and the way you do your things. I’m such a lucky babe. You’re also lucky, but it’s your birthday, so yea, let’s focus on the celebrant. I know God knows how much I want you to shine and prosper and win and laugh and be happy, so I pray God grants my heart desires. Happy birthday, Champ.”

Simi however disabled comments on the post as she’s been under pressure to share more photos from her wedding. But the newly wed celebrity couple, who were on honeymoon a week ago, had released their first song together as a couple. The young couple had spent time together at the Victoria and Alfred Waterfront in Cape Town, situated on the Atlantic shore, South Africa. In the video of the song, the superstars gave a beautiful glimpse into their happily ever after.

The new collaborative single ‘Promise’ takes viewers to picturesque locations and, for the first time, presents the happy couple flourishing in the glow of each other’s’ love for the world to see. Very intimate video, but also fun enough that viewers are pulled into it without feeling awkward. The lyrics of the song, as the title implies, sounds very much like wedding vows; leaving followers to guess whether these were their actual vows.

Their wedding has since stirred reactions from Nigerians who wondered how Adekunle Gold and Simi were able to keep their relationship a secret. Simi and Adekunle Gold have been together for a very long time before their surprise/secret wedding, the singers had been in a relationship for close to seven years and had worked together severally on various projects of each other.

At the beginning of their career, the two kept their brands separate and were hardly photographed together. Given the heavy spotlight on celebrity couples, this decision paid well for Simi and her boo as they were able to build their careers outside the spotlight. Making a strong case for why Simi and Adekunle Gold should be the ultimate benchmark of privacy in relationships

Simi started her career as a gospel singer, releasing her debut studio album in 2008 titled Ogaju.  Her career came into spotlight in 2014 after she released “Tiff”, a song which was nominated in two categories at The Headies 2015  and further brought her to mainstream recognition. Simi is currently signed to X3M Music under which she released her second studio album Simisola.

Simi grew up dancing and singing as a member of her local church’s choir until she wrote her first song at the age of 10. Her professional music career started in 2008 following the release of her debut album titled Ogaju which consisted of a variety of songs such as “Iya Temi” and “Ara Ile” with the entire musical production from Samklef.