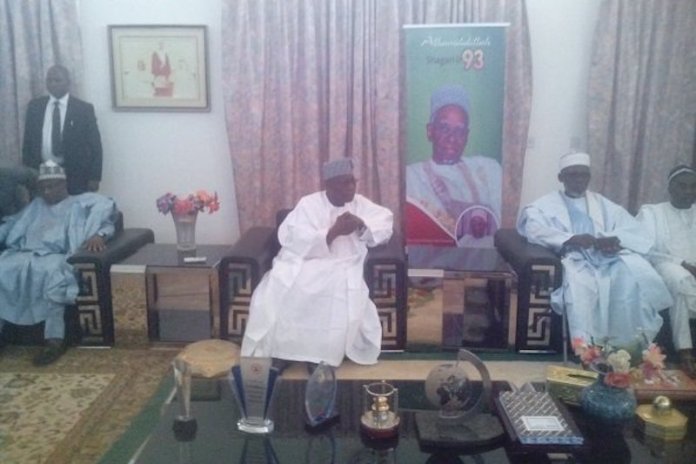 Former President Olusegun Obasanjo yesterday condoled the family of the late ex- President Shehu Shagari, describing him as an epitome of personal integrity, commitment, forbearance, forgiveness and faith in God.

Also, the Senate President, Dr. Bukola Saraki, was among the dignitaries that visited the Sama road, private residence of Shagari who passed on at the national hospital in Abuja on Friday.

Obasanjo who was led to the Sokoto family house of the late second republic President by Governor Aminu Waziri Tambuwal, arrived via the Sa’ad Abubakar international airport,Sokoto at about 9. a.m.

Condoling the family through the eldest son, Muhammad Bala Shagari , Obasanjo further said the late Shagari was a man with simplicity, faith in God, commitment to own father land with interest in duty.

The former President while recalling his days in service and closeness to late Shagari in General Yakubu Gowon’s cabinet, said he was honest, transparent and committed Nigerian.

“I had opportunity to work with him and immediately we were kicked out of government, I was immediately appointed Chief of Staff and had the task of managing our colleagues back to their respective places. He thanked me for making arrangement for him to get back to Sokoto State.

“Shagari should not be mourned but should be celebrated as a true, honest and sincere leader who was a nationalist to the core. Nigeria has lost a gem.”

Obasanjo further recalled how late Shagari expressed surprise when the mantle of leadership was handed to him in 1979 by a military head of state which happened to be himself.

Meanwhile, Saraki was among the dignitaries that visited Shagari family in Sokoto.

Saraki, who was accompanied to the house by the Governor of Sokoto State, Alhaji Aminu Waziri Tambuwal, described the late former president, as a man of integrity and lovers of his people.

He described the tenure of Shagari as the president of the country, as one of the finest time in the history of Nigeria based on his infrastructure development and agricultural revolutions.

Also a former Vice President, Nnamadi Sambo, has condoled the governmennt of Sokoto State over the death of Shagari.

Sambo described his death as not only a loss to his family or the state but the country, Africa and the world at large due to his records of achievement when he was the president in the first republic.