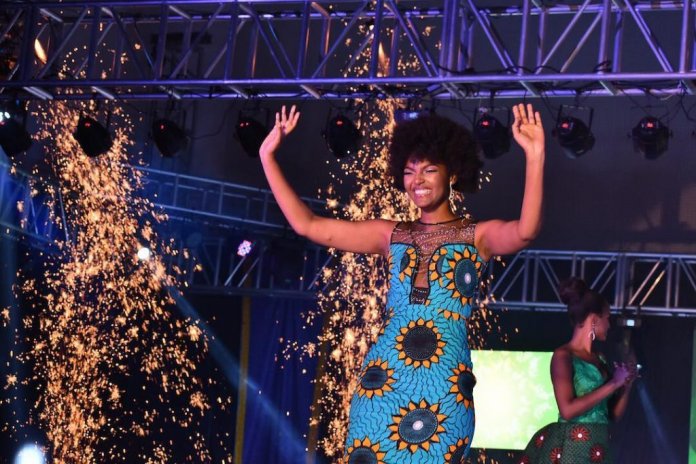 A 24 years old, Dorcas Kasindes model from the Democratic Republic of Congo (DRC) has emerged as Miss Africa 2018, and lucky winner $25,000, and a Sport Utility Vehicle (SUV) prize.

The contestants for the coveted Miss Africa Crown were drawn from South-Africa, Nigeria, Somalia, Ghana, Tunisia, and other African countries.

Dorcas, in her post victory speech, enjoined those she contested against to view the crown she won as that belonging to every African woman.

“I believe in myself so much, I’m an outgoing, fun loving young woman with philanthropist’s heart. I believe that there is more happiness to give than to receive,” the new African Queen said.

Docars, gave a hint of what she would do with her money, saying “I will give a certain percentage of my money to Kulisha Foundation, Mihigo Foundation in the Democratic Republic of Congo (DRC) that has the same vision as me and to other associations around the continent that has the same goal.”

Speaking at the event on the theme: “Africanism: Changing the Narratives of African History, and Showcasing the Rich African Heritage”, the Cross River State Governor, Professor  Ben Ayade, said it was time for Africa and Africans to take their rightful place in History and the world Affairs.

“Africanism is the reality, it is time for Africa to lead .We used to be seen the last continent but our stories are changing. And they are changing because they have shown extra ordinary commitment and attitude.

Africa most go beyond colour because we have taught the rest of the world how to love. America is past, China is now, but Africa is the future, and we’ve just take the centre stage. We are the epicentre of tourism, and hospitality,” Ayade said.

Earlier, Chiamaka Goodness Nnaemeka, was presented her crown as Miss African Food Festival 2018, and a cash price of $3,000 from the Beatrice Bassey Ita Foundation, sponsored by Mrs. Florence Ita-Giwa.

Nnaemeka performed the feat a week earlier at the African Club where the African Food Festival was staged.

Some top Nigerian artistes among them, Tiwa Savage, Mr. Real, Tuface Idibia spiced to the Thursday night event with their captivating stage performances.