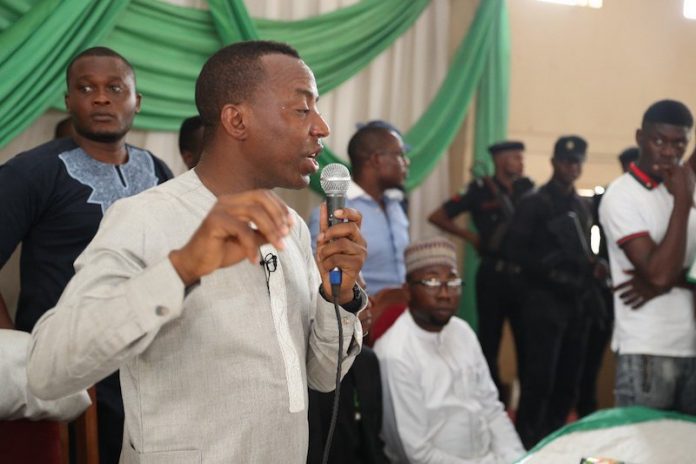 Presidential candidate of the African Action Congress (AAC), Mr. Omoyele Sowole has cried out that the police have arrested his supporters for pasting posters in parts of Lagos state. He specifically accused the All Progressives Congress (APC) of masterminding the arrest, even as he said that that would not deter him or the AAC from wresting power from the ruling party.

Sowore, in a statement signed by Rachel Onamusi-Kpiasi the Director of Media and Communications, African AAC disclosed that five members of the party were arrested during the early hours of Sunday, December 9 for pasting posters in Lagos State and are still being held in custody.

According to the statement, the five arrested did not violate any law by placing the posters and “creating awareness for the only alternative to the rot that has decimated our nation. Pasting posters is not and has never been a crime in Nigeria, and this recent act of injustice suffered by the Take It Back Movement, the AAC and its presidential candidate, Omoyele Sowore, is further proof that the APC is not interested in a free, fair election or in doing what is best for Nigerians.

“Every step of the AAC party’s campaign has been dogged with impediments and outright blocks from the ruling party. From cancelled TV interviews to the withdrawal of rally permits in the northern part of Nigeria, the Buhari-led government has launched a vendetta campaign against the one party resolved in bettering the lives of Nigerians.”

The statement said that there are no guesses as to why the APC has taken offence against the AAC. “While unwilling to pay hardworking Nigerians N30,000 a month for work done as minimum wage, the AAC promises a living wage of N100,000 per month. While the incumbent government looks the other way while Nigerians are killed in their droves by terrorists, the AAC promises prosecution and tougher security measures to guarantee the safety and protection of Nigerians.

“While the APC wakes from its slumber and cluelessness after three years of governance to offer Nigerians bread and N10,000 in exchange for their souls, the AAC not only promises to work from day one, but also shows exactly how it plans to execute these tasks and where the funding will come from.

“Certainly, it is clear that the APC has no intention of leading Nigeria with incorruption, integrity or probity but we will continue to fight because Nigerians deserve better than the dire hand they’ve been dealt. Nigeria must progress, and we will uphold the struggle until she does.”