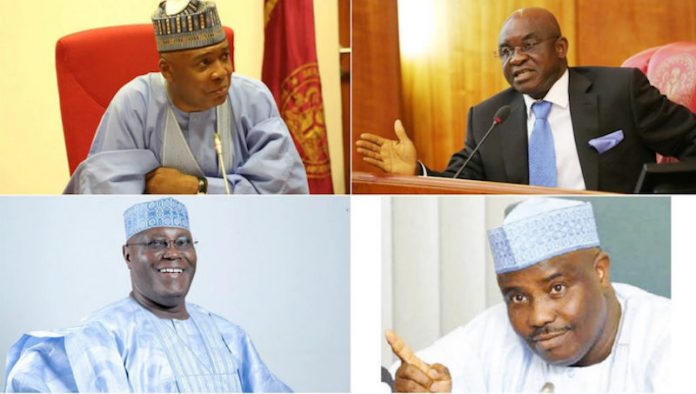 Presidential aspirants on the platform of the Peoples Democratic Party (PDP) yesterday said they have resolved to support whoever emerges as the party’s standard bearer ahead of the 2019 elections.

But barely a week to the national convention of the PDP where the party is expected to elect its presidential standard bearer, members of the party are still divided over the venue of the convention scheduled to take place in Port Harcourt, the River State capital.

While commending the screening process, the aspirants insisted that it was not about selfish interest, but about the party and how to rescue the country from imminent collapse.

The screening of the aspirants, which was scheduled to take place at the party’s secretariat at Wadata Plaza in Abuja, was later moved to the party’s presidential campaign office at Legacy House, Maitama.

The Senate president was the first aspirant to be screened in the exercise that started at 11a.m.

Speaking through his media aide, Mr. Yusuf Olaniyonu, Saraki passed a vote-of-confidence on the presidential screening committee of the party, saying that the level of transparency showed that the party was ready for free,and credibleprocess.

He stressed that the atmosphere at the screening was that of fairness and friendliness both from the aspirants and the party.

According to him, “this has given me the belief that PDP is ready for free, fair and credible process. The unity that existed while waiting for the screening showed that they will work together with whoever emerges.”

The Senate president said he was impressed that there was no bitterness in the ongoing campaign by the presidential aspirants.

Also, former Minister of Special Duties and Inter-Governmental Affairs, Kabiru Tanimu Turaki (SAN), said the aspirants must work together, and synergise to ensure that PDP saves Nigeria from imminent collapse.

He said, “Only one person can be president at a given time and whosoever gets it, by the special grace of God we have resolved to support that person.

“It is not about us, it is not about selfish interest, it is about our party and about this country. It is only PDP that can save this country. We are not going to be distracted, the focus that all of us have and that focus is that we should ensure that PDP gets back into office on May 29, 2019.”

Also the former governor of Sokoto State, Attairu Bafarawa, said the opposition party was not happy about the decision of the electoral body.

“As far as we are concerned, we are not happy with the way and manner the INEC took decision. I don’t know the dimension that INEC decided to go for rerun election, but as a layman we believe that we are the winner.”

On the issue of consensus, Bafarawa said when the time comes they would say something about it.

On his part, former Governor of Plateau State, Jonah Jang, said the process was transparent and credible.

“The process is beautiful. Absolutely I stand a chance to win the ticket. I am optimistic because I believe that God is going to give it to me,” he said.

While fielding questions from journalists after his screening, former Senate President, David Mark, said the screening was rigorous, tough, but also very interesting.

On election, he said; “Did you listen to me yesterday, I said INEC should declare PDP the winner and let us move on. The APC must learn

to accept the result that emanated from the wishes of the people. APC must not send the wrong signal that they cannot take defeat.”

However, the presidential screening appeal panel has been scheduled to sit today at the presidential campaign office of the party, Legacy House, Maitiama, Abuja, to resolve whatever issues or grievances that may arise from the screening.

Other aspirants that could not make it yesterday would be screened today by the committee.

Meanwhile, barely a week to the national convention of the PDP

where the party is expected to elect its presidential standard bearer, members of the party are still divided over the venue of the convention scheduled to take place in Port Harcourt, the River State capital.

There had been speculations that some presidential aspirants had kicked against the choice of Port Harcourt, saying that the venue was chosen to give undue advantage to some aspirants.
While speaking at the inauguration

of the national convention committee of the party however, the Deputy National Chairman South, Yemi Akinwonmi, said that on the issue of venue, the party set up a committee headed by Alhaji Ibrahim Kazaure that went round the South-south and South-east zones before coming out with the choice of Port Harcourt.

However, the PDP BoT Chairman, Senator Walid Jibril, wasted no time in letting the cat out of the bag, saying the issue of venue was still a contentious one.

The Governor of Ebonyi State,

Dave Umahi, said that the working committee and the BoT should settle the issue of venue.

Also, the convention committee chairman and the governor of Delta State, Ifeanyi Okowa, said that the committee is aware that if the party gets the convention right and that if the process is credible, free and fair, they will have the buy in of all its presidential aspirants, thereby going into the 2019 elections with a united family.

He stated, “I also want to believe that if there are any internal issues, it will be resolved within today. I am very confident of that, because all of us believe that the only way forward is for the entirety of the party to stay united and focused.

“And as such, as members of the PDP, we cannot afford to disagree on

any issues. The thing that is needed is for a free and fair primary to be conducted for all our aspirants. And we are very definite that we will get it right. No matter where we take it to, we will do what is right. And I believe that at the end of the day, nobody will have any cause to complain,” Okowa assured.

Other members of the 85-member nationalconventioncommitteeinclude: the Vice Chairman of the committee and Taraba State Governor, Darius Ishiaku, Secretary of the Committee, Governor of Ebonyi State Mr. Dave Umahi, while the some of the members are former Niger state governor, Babangida Aliyu, Senator Ben Bruce, former governor of Ebonyi State, Gabriel Susan, among others.