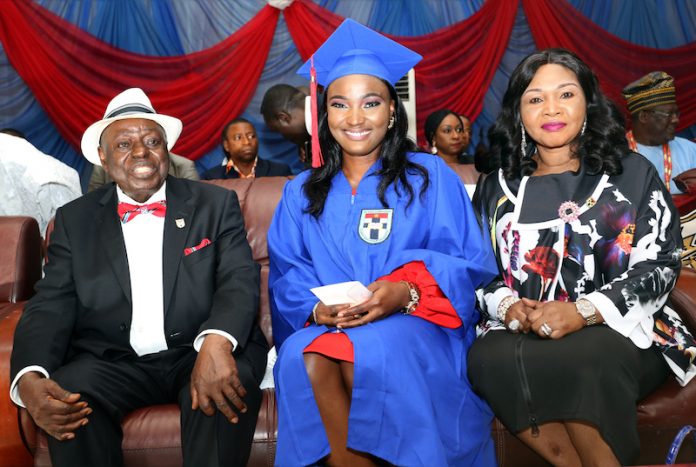 Celebration rented the air, recently, at the induction ceremony of the first set of 43 medical doctors produced by Afe Babalola University Ado Ekiti (ABUAD), as Dr. Esther Adaobi Azom, 26, the second of a family of six was called to the podium to receive her award for being the best graduating student with distinction in Medicine, Surgery and Community Medicine.

She was the cynosure of all eyes at the programme, held at the institution’s Alfa Belgore Hall, graced by dignitaries from all walks of life and royal fathers including the Ooni of Ife, His Imperial Majesty, Oba Adeyeye Eniitan Ogunwusi, the Ewi of Ado Ekiti, His Royal Majesty, Oba Rufus Adejuyigbe Aladesanmi III, the Osemawe and Paramount Ruler of Ondo Kingdom, HRM Oba Victor Kiladejo, among others.

Already, Azom who had maintained an excellent record of distinctions had won the founder’s scholarship award of N500, 000 from 100 to 500 level. In the final MBBS exams, she had distinctions in all the three papers including; Surgery, Medicine and Community Medicine, respectively.

She also got various cash prizes running into millions of naira from royal fathers present, as well as a brand new car worth N5.7 million, donated by Coscharis Motors to the institution, and automatic employment in University College Hospital (UCH), Ibadan, at the programme.

Other prize winners including Chisom Elsie Igbokwe, Chima Ndubuisi, Modupe Apata and Chiedozie Obi, also had distinctions in Surgery and Community Medicine, respectively. They got a cash prize of N500,000 each.

The Anambra-born Azom who grew up in the city of Jos, recalled her experience on campus saying, “My experience in ABUAD has been good , being a medical student has been a challenge, but I thank God that it ended in success.”

She attributed her success to hard work, diligence and the talent which God has given her.

“I have always dreamt of being a medical doctor, there is no how one can leave out the God factor here,” she said, while advising other students to be focused and hardworking.

Her elated father, Mr. Emmanuel Azom, said she has been very studious from inception, noting that already some of her siblings had graduated from the university with first class and had made distinction at the masters level in the UK.

Speaking at the programme, the President of the Medical and Dental Council of Nigeria (MDCN), Dr. Francis Faduyile congratulated the graduating doctors saying that this qualifies them to be trainable and face new challenges.

He admonished them to eschew vices and professional misconduct saying that such attracts serious consequences.

“I call your sacrifice a worthy sacrifice, the journey has not been easy, but you have weathered the storm, much was given and expected from you and you have delivered.”

The Registrar of the council, Dr. Tajudeen Sanusi who emphasised on the challenges facing graduates , noted that it is working towards ensuring that the inductees starts their internship which is the first part of their training to attend to patients.

“Being addressed as doctors carries serious responsibilities, but this is just the beginning of your career. As doctors, you are faced with multiple laws, but there is one that binds you ‘the code of medical ethics’, which you are subjected to . Medicine is not practiced in isolation, ensure that you do all that is needed to do for your patients.

The Ooni of Ife, His Imperial Majesty, Oba Adeyeye Eniitan Ogunwusi expressed excitement about the success of the graduating doctors while admonishing the class to come together as an alumni that will add value to research.

Oba Ogunwusi who announced a prize of N 1million for such effort said, “Do not relent on research and anything that will add value to the nation. What medical doctors do are priceless. Remember the university for good. As you have graduated today, pick one or two people that you can mentor, make sure you bring yourselves together as a class and ensure you continue to add positive value to the university, Nigeria and to your parents.”

He also promised a cash prize of N250,000 every year for the best graduating doctor.

The Founder and Chancellor of the University, Chief Afe Babalola recalled how the institution’s MBBS programme started more than six years ago culminating in the success of the 43 graduands saying, “From my experience , there isn’t much compliance with rule and regulations in Nigeria and that is why there has been poor reading culture. But here, we are different. We are probably the only the only university in Nigeria that makes its students go to classes between 8 am and 3 pm and later from 7 pm to 10 pm. There is no room for indolence here, and this has paid off handsomely with the comments of the external examiners during our first final MBBS examination.”

He congratulated the graduands saying that they have been able to set a standard, not only by their excellent performance, but as pathfinders in the medical history of the university.

“There will never be another pioneer set of medical students here, As new doctors, study yourselves, know yourselves and continually bear the kernel of the university anthem which emphasised the place and import of determination, industry and character in mind as you begin a new chapter in your career, ” he said.

The Vice-Chancellor, Professor Michael Ajisafe who congratulated the inductees on their achievement of becoming thoroughly trained professionals in a space of six years, also appealed to regulatory bodies to increase its MMBS admission quota, considering its avalanche of facilities and personnel.

In his paper entitled, ‘Medicine by Choice or Medicine by Coercion’, the Chief Medical Director, University College Hospital (UCH), Ibadan, Professor Temitope Alonge, expressed concern about the issue of brain drain among Nigerian medical officers saying that they submit themselves to organised slave abroad.

He said the issue of brain drain usually comes in various guises when a fully trained medical doctor leaves the shores of the country to take a primary job as a mortician.

“Whilst it is impossible to halt the brain drain saga that was accentuated by the exodus of medical experts from Nigeria in the late 1980s, this phenomenon has reemerged with juicy offers for training programmes in the west. Brains are now being poured out into the drains when a medical doctor ends up as a car salesman.”

Alonge who announced an automatic employment for three best graduating students of the institution for their horsemanship advised the graduands said, “there are no easy options in life and unless you go through the routes of greatness, which may be rough and stressful , this noble profession of medicine may not yield its entire desired and locked up dividend.”

The Executive Secretary of National Universities Commission (NUC), Professor Abubakar Rasheed commended the outstanding contributions of the university on the education sector, noting that an institution must strive for excellence and carve a niche for itself in specific fields.

To the new inductees, he said, “You have been trained to be medical doctors. As you go out of the comfort of your university to the real world, you will meet many people who might be at the lowest moments of their lives. People who need you to get well again. Be kind, be compassionate and please treat them well with utmost courtesy.”

Imo Repeals Law on Pensions, Gratuity to Ex-governors, Speakers, Others