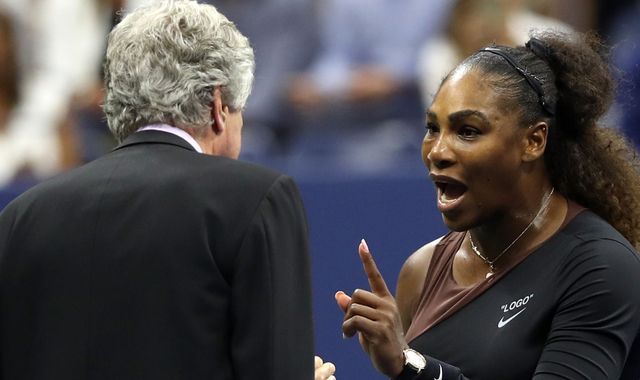 Serena Williams was yesterday fined $17,000 for the code violations that included calling the umpire a “liar” and “thief” in her US Open final loss on Saturday.

Williams, beaten by Naomi Osaka, was docked a game for verbal abuse and had a point penalty for racquet smashing and a code violation for coaching.

She later said it was “sexist” to have been penalised a game.

Williams’ fine for the code violations, imposed by the United States Tennis Association (USTA), will be deducted from the $1.85 million the American won as the runner-up.

Williams, who was aiming to equal Margaret Court’s record of 24 Grand Slam singles titles, refused to shake hands with umpire Ramos after the match.

She later accused him of sexism, saying: “He’s never taken a game from a man because they said ‘thief’.”

Williams was given a first code violation after Ramos judged a gesture from coach Patrick Mouratoglou to be coaching.

She said she had not received any tactics from Mouratoglou, telling the umpire she would “never cheat to win and would rather lose”.

The Frenchman later admitted that he had been coaching from the box but that Williams had not seen him doing so.

Williams then received another code violation for a racquet smash at 3-2 in the second set, leading to Ramos docking her a point.

With Osaka leading 4-3, Williams told the umpire: “You are a liar. You will never be on a court of mine as long as you live. When are you going to give me my apology? Say you are sorry.”

That led to Ramos docking her the next game to leave Osaka just one game away from victory at 5-3 up.

Williams refused to take to the court and demanded an intervention from the tournament referee.

Eventually she returned to the baseline, serving out a game to love before Osaka held serve to win her first Grand Slam win.

In her post-match news conference Williams said she was she “was not being coached” and that she “did not understand” why Mouratoglou would say he was doing so.

BBC tennis presenter Sue Barker said: “The umpire was following the rules by the book but Serena has a point.”

Barker, a former world number three and 1976 French Open champion, added that “tennis was the loser” from Saturday’s events.

“I’ve sat courtside watching the men ranting at umpires and they haven’t been given a violation,” Barker said.

“The fact that it was to be a game violation then robbed the crowd of what potentially could’ve been a third set.”

Barker told BBC Radio 5 live’s Sportsweek programme: “Both have a point – Serena saying the male players can say what they want to umpires.

“Earlier in the tournament we saw Alize Cornet being given a code violation for changing her shirt on court and then in the same tournament Mohamed Lahyani gets down from his chair to talk to Nick Kyrgios and persuade him not to give up on a match.

“He (Ramos) was following the rules by the book but sometimes the book has to be rewritten.

“You can’t have one rule for some players and some umpires don’t adhere to it and allow players to get away with things. They’ve just got to be fair to the players.

“Tennis was the loser and we lost what was potentially a fantastic match.

“I’ve never seen anything like it since I have been watching tennis. It was sad for the game.”

Marion Bartoli, the 2013 Wimbledon champion, echoed Barker’s stance on the difference between how male and female players are treated.

“What the umpire did is totally not acceptable and I hope that we are going to have a sanction because we just can’t let that happen,” she said.

“When there is absolutely no curse or verbal abuse from Serena then giving her a game penalty is insane. You can’t do that. It is impossible.

“She’s right when she says the men say 10 times worse and don’t even get a warning.”

Ramos has given Novak Djokovic, Rafael Nadal and Andy Murray code violations in the past two years.

He also accused Serena’s sister, Venus, of receiving coaching during a 2016 French Open match, although she wasn’t penalised.

“I think she (Serena) went a little bit too far,” said 18-time Grand Slam singles champion Chris Evert. “What she was saying, she had every right to say but she kept repeating herself.

“After a while it is like ‘you have to stop’.

“Just because of the enormity of the moment, the umpire should have given her a bit of break but, instead, went right for the jugular.”.

American 12-time Grand Slam singles champion Billie Jean King, one of the founders of the Women’s Tennis Association, backed Williams, saying: “When a woman is emotional, she’s ‘hysterical’ and she’s penalised for it. When a man does the same, he’s ‘outspoken’ and there are no repercussions.

“Thank you, Serena Williams, for calling out this double standard. More voices are needed to do the same.”