Additional 10 governorship aspirants have so far obtained nomination forms to vie for the ticket of the All Progressive Grand Alliance (APGA) in the 2019 general elections.

Some of the governorship aspirants who came to collect their nomination forms in the last two days include, former Chairman of the Nigerian Electricity Regulatory Commission (NERC), Sam Amadi; Okey Eze; Daniel Kanu; Bright Nwanne and Uche Onyeaguche.

Kanu, who picked his nomination form yesterday, said elections have already been won and lost in Imo state.

He said Rochas Okorocha wants to remain in government through a proxy.

He vowed to work with people of like minds and end Okorocha’s political dynasty in Imo state.

“The election has already conducted itself because I believe that our people are very democratically-driven. “The current governor was elected in 2011 and he defeated a sitting governor then under the PDP and it was done through APGA and we the people made it happen,” he said.

Also addressing journalists after obtaining his nomination form from the headquarters of APGA, a governorship aspirant in Imo State, and former NERC chairman, Sam Amadi, said a process to end the legacy of deceit, corruption and audacious immorality in Imo State has begun.

Amadi who boasted that he is the most qualified to fly the flag of APGA, said since the end of Sam Mbakwe’s era in the state, “418 operatives have hijacked political power. They have carried out unbridled stealing of public wealth and criminality.

“Those who invaded political leadership in Imo state and built this infrastructure of poverty and misery have consolidated their political power in the state through continuous impoverishment of the citizens.”

Meanwhile, a leading governorship aspirant in Abia State, Mr. Alex Oti, yesterday, decried the high level of insecurity in the state. According to him, the state governor, Okezie Ikpeazu, has failed to secure lives and property of the people, since he assumed office in 2015.

Oti made the assertion at the national secretariat of the All Progressives Grand Alliance (APGA), when he picked his governorship nomination form.

He told journalists that he was robbed of his mandate in 2015, but vowed to resist a repeat of that in 2019. The former banker said the failure of the state government to uplift the lives of the people will make his victory easy.

He said: “We are ready to take over the leadership of Abia state. The good news is that, the present government in Abia state has failed. .

“The people have realised it and they are ready to take back their state. We are reclaiming our state.”

Another governorship aspirant who piked form thursday, Chike Udensi said that time has come for APGA to ensure that whoever it would give its ticket would be one that can win and protect the votes.

He pledged to use his vast experiences and contacts as a international security consultants to ensure that there conducive environment for economic growth in Abia state.

Going Back to Work after a Six-Week Holiday 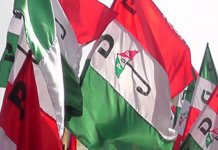