With extreme weather costing hundreds of billions a year and fears that by 2050, one in four people will be living in a country affected by severe water shortages, a global conference has been convened by the United Nations meteorological agency to manage the precious resource more sustainably.

The problem has been further complicated by a lack of comprehensive water supply data and monitoring systems which is making it harder to respond to the growing crisis, a UN release noted.

â€œWe cannot manage what we do not measure,â€ said the President of the World Meteorological Organisation (WMO) Commission for Hydrology, Mr. Harry Lins.

â€œAnd yet the systems and data collection which underpin these vital services to society are under real pressure,â€ he added, underscoring that informed decision-making must be based on comprehensive facts and figures.

The HydroConference, which took place in Geneva, Switzerland from 7-9 May, brought together water stakeholders including decision makers, meteorological and hydrological services; the private and academic sector; non-governmental organisations, and UN entities â€“ around the same table to coordinate efforts as well as leverage individual knowledge and collective expertise to maximum effect.

WMO Secretary-General Petteri Taalas said it was important for all actors to cope with the scale of the challenges that lie ahead, citing the two extremes of droughts and floods.

â€œEffective flood and drought policies can be implemented only with data and models for assessing the frequency and magnitude of extreme events,â€ he said, adding that the same also holds for other goals related to water and its efficient use; including those in the 2030 Agenda for Sustainable Development.

Sustainable Development Goal 6 (SDG 6) explicitly calls for sustainable management of water and sanitation for all. Water is also a key component for other Goals including those on eliminating extreme poverty (SDG 1); as well as Goal 2, to eradicate hunger and malnutrition, as well as Goal 13 on mitigating climate change.

Meanwhile, WaterAid Nigeria has commended the Federal Government for its bold step in declaring a state of emergency for water, sanitation and hygiene, following strong calls by the former and other members of the WASH sector demanding action to tackle the water and sanitation crisis in the country.

WaterAid, an international charity dedicated to changing lives by improving access to water, sanitation and hygiene for the poorest and most marginalised communities, advocated a state of emergency to ensure that the Sustainable Development Goal of access to water and sanitation for everyone, everywhere by 2030 would be achieved.

According to a release issued by WaterAid Nigeriaâ€™s Communications & Media Manager, Oluseyi Abdulmalik, â€œalthough Nigeria is oil-rich and has sub-Saharan Africaâ€™s largest income, it has nonetheless struggled to deliver clean water and sanitation to its people. The country has made solid progress in reaching people with water: seven in ten people now have clean water to drink.

â€œBut a gap between poor and rich persists, as only 30 per cent of the poorest people have access to clean water, compared to 89 per cent of the richest. And with fewer than three in ten people having a decent toilet, the country has a big task ahead to achieve the Sustainable Development Goal targets for water and sanitation access.

â€œOn World Water Day 2018, WaterAid Nigeria urged the federal government to declare a state of emergency in the water and sanitation sector. WaterAid Nigeria also called on the federal government to set up a presidential taskforce empowered to lead, coordinate and deliver on providing water and sanitation for all Nigeriansâ€, the release added.
In its declaration of the state of emergency in WASH, the Nigerian government stated that the WASH sector in Nigeria was in crisis and that urgent action was required for its revitalisation.

WaterAid Nigeria Country Director, Dr. ChiChi Aniagolu-Okoye, said: â€œI am delighted that the Federal Government has declared a State of Emergency in WASH, following our campaign demands during World Water Day and beyond. We hope that with this declaration more attention will be focused on the sector. This is a significant step towards achieving clean water, sanitation and hygiene for everyone, everywhere by 2030.

â€œWaterAid urges all governments to take action ahead of the UNâ€™s High Level Political Forum in New York in July, where Goal 6 of clean water, sanitation and hygiene for everyone, everywhere by 2030 will come under review. Without water, decent sanitation and good hygiene, other SDGs, including those on gender equality, education, health, reducing inequalities and nutrition, cannot be achieved,â€ she added.

While commending the increased prioritisation for WASH that this new declaration indicates, WaterAid Nigeria continues to call for Government backing of this declaration with significant investment and to raise the financing needed to assure sustainable and affordable WASH services for all.

The organisation urged the federal government to ensure that the National Healthcare Act which requires 1 per cent of the Consolidated Revenue Fund is channelled to healthcare is implemented with clear inclusion of WASH in healthcare priorities.

It also called for multi-sectoral coordination and clarity of institutional arrangements, the lack of which is hampering the development of needed policies (such as the national sanitation policy) and hindering robust sector plans and policies with critical inputs of sector actors and sufficient ownership by allied sectors.

WaterAid further sought for harmonised monitoring and supervision platform for the sector. â€œThose that exist are duplicative, non-inclusive, unreliable and not owned by all key sector actors. Gaps in Nigeriaâ€™s monitoring frameworks for the sector sabotages sector planning and makes it difficult to measure the impact of WASH interventions and track progress of WASH accessâ€, it added.

States and local governments were also urged to take advantage of the state of emergency by launching the same in their respective states. 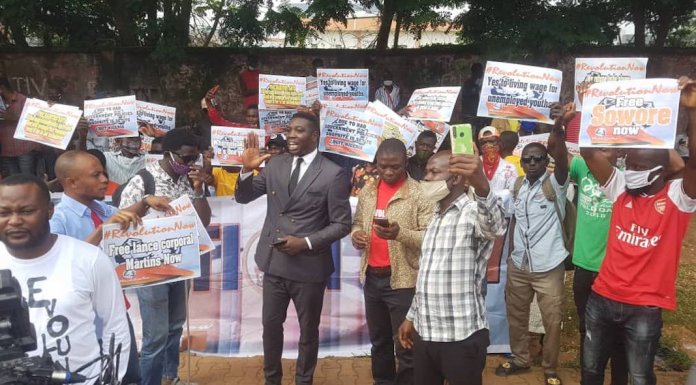