All is now set for Prince Harry is to marry his American actress girlfriend Meghan Markle. The prince, fifth in line to the throne, will marry Ms Markle next spring and will live at Nottingham Cottage at Kensington Palace in London.

Prince Harry said it had been a romantic proposal, while Ms Markle said she was â€œso very happy, thank youâ€. Ms Markle, wearing a white belted coat, held Harryâ€™s hand as they appeared briefly for the press at the palaceâ€™s Sunken Garden, and showed off her diamond engagement ring.

Asked by a reporter when he knew Suits star Ms Markle â€œwas the oneâ€, Prince Harry said: â€œThe very first time we metâ€. A TV interview the couple gave to the BBCâ€™s Mishal Husain was broadcast at 18:00 GMT on Monday.

Kensington Palace said Ms Markleâ€™s engagement ring was designed by Prince Harry and features two diamonds which belonged to his late mother, Diana, Princess of Wales. At the centre of the ring is a diamond from Botswana, a country the couple had spent time together over the last year and a half. The band is made from gold.

The wedding announcement, issued by Clarence House, the Prince of Wales and Duchess of Cornwallâ€™s official residence, said details would be unveiled â€œin due courseâ€.

The Queen and Duke of Edinburgh said they were â€œdelighted for the couple and wish them every happinessâ€, a Buckingham Palace spokesman said.

Prince William and Catherine, Duchess of Cambridge, said they were â€œvery excited for Harry and Meghanâ€, adding: â€œIt has been wonderful getting to know Meghan and to see how happy she and Harry are together.â€
Justin Welby, the Archbishop of Canterbury, whose predecessor officiated at the Duke and Duchess of Cambridgeâ€™s Wedding in 2011, wished them â€œmany years of love, happiness and fulfilmentâ€.

Ms Markleâ€™s parents, Thomas Markle and Doria Ragland, said their daughter was a â€œkind and loving personâ€ and they were â€œincredibly happyâ€. They added: â€œTo see her union with Harry, who shares the same qualities, is a source of great joy for us as parents.â€

Prime Minister Theresa May offered her â€œvery warmest congratulationsâ€ and wished the couple â€œgreat happiness for the futureâ€. Labour leader Jeremy Corbyn said: â€œI wish them well – I hope they have a great life together.â€

Prince Harry, 33 and Ms Markle, 36, made their first public appearance as a couple in September at the opening ceremony of the Invictus Games, a sporting event set up by the prince for injured, wounded and sick soldiers.

Their married home will be the princeâ€™s current residence, Nottingham Cottage, on the grounds of Kensington Palace – where the Duke and Duchess of Cambridge, with Prince George and Princess Charlotte, also have an apartment.

Their 16-month relationship began in July 2016 when they met through mutual friends in London. Prince Harry first confirmed his relationship with Ms Markle in November 2016, in a statement from Kensington Palace. That statement said the couples were â€œa few months into a relationshipâ€ and it was â€œnot rightâ€ that Ms Markle should receive such treatment.

It described nightly legal battles to keep defamatory stories out of papers, attempts by reporters and photographers to get into her home and the â€œbombardmentâ€ of nearly every friend and loved one in her life. Ms Markle spoke about her love for the prince for the first time in September, telling Vanity Fair magazine: â€œWeâ€™re two people who are really happy and in loveâ€. She said the pair were enjoying a â€œspecialâ€ time together, adding: â€œIâ€™m sure there will be a time when we will have to come forward and present ourselves and have stories to tell, but I hope what people will understand is that this is our time.â€

Ms Markle may not have been a familiar name in the UK until recently, but in the US she was known for her role as Rachel Zane in TV legal drama Suits. She attended a private primary school before studying at a girlsâ€™ Roman Catholic college and later graduating from Northwestern University School of Communication in 2003, just as her acting career was beginning.

Until recently, a union with Ms Markle would have ruled Prince Harry out of succeeding to the throne – due to her being a Roman Catholic. New rules on royal succession came into force in 2015, allowing members of the Royal Family to marry a Roman Catholic and become king or queen.

Ms Markle was previously married, but the Church of England agreed in 2002 that divorced people could remarry in church at the discretion of the priest. The instant Prince Harry and Ms Markle are pronounced â€œman and wifeâ€ she will automatically become Her Royal Highness, Princess Henry of Wales. However, she does not automatically become Princess Meghan – because she is not of royal blood.

editor - October 20, 2020 2:13 am
4
BY REUBEN ABATI Turning and turning in the widening gyre The Falcon cannot hear the falconer; Things fall apart; the centre cannot hold; Mere anarchy is loosed upon... 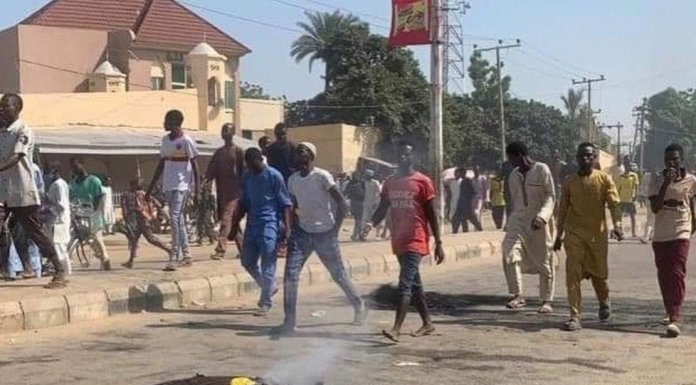