Justice Baba Yusuf reaffirmed the bail on Dasuki on the grounds that he (Dasuki) was entitled to it and having been admitted to same since 2015 when the federal government brought charges against him.

Dasuki and five others were re-arraigned before Justice Baba Yusuf on the criminal charges that were transferred from Justice Peter Affen also of an Abuja High Court.

However, after the 22-count charge were read to the six defendants and all pleaded not guilty, counsel to Dasuki, Mr. Ahmed Raji (SAN), applied to the court to reaffirm the bail granted to the ex-NSA even though he has not been allowed to enjoy same since December 2015.

Three different high courts have granted Dasuki bail but the bail orders were not obeyed by the government. He has been in custody since December 2015.

The counsel stated Dasuki had been admitted to bail before he was illegally arrested and detained by the Department of the State Security Services (DSS).

Raji argued that with the transfer of the case from Justice Affen to Justice Baba Yusuf, the DSS had been separated from the matter, adding that the court record indicated that Dasuki was being prosecuted by the Economic and Financial Crimes Commission (EFCC) and not DSS that had been acting as interloper.

The counsel further said the illegal act of interloper should not be used to divest the court of its power to reaffirm the bail granted Dasuki earlier because he was entitled to it.

He then urged Justice Baba Yusuf to adopt the bail conditions earlier granted Dasuki before Justice Affen and reaffirm same in the interest of justice.

The counsel argued that it was wrong of the prosecution counsel, Mr. Rotimi Jacobs (SAN) to have objected to the reaffirmation of the bail condition on Dasuki, adding that he (Dasuki) had in his possession a judgment of the ECOWAS Court which last year set aside the unlawful detention of the Ex-NSA and also imposed a fine of N15million on the federal government as compensation to his client.

Another Senior Advocate of Nigeria, Prince Lateef Fagbemi, who spoke as a friend of the court argued that there was no dispute that Dasuki was granted bail but has not been released by the DSS to enjoy the bail.
The senior counsel described the action of DSS as most unfortunate and urged Justice Yusuf to resist the temptation of being drawn into the illegality of actions of the DSS on Dasuki.

The federal government counsel, Mr. Rotimi Jacobs (SAN) had informed the court that he has no objection to the affirmation of the bail earlier granted to five other defendants in the trial but however urged the judge not to make any pronouncement or order in respect of the bail for Dasuki since he had not been allowed to enjoy any bail.
He said: “Court must not act in vain, there is no point making an order in vain. Dasuki has been in the custody of the DSS since 2015 and is still there till today.”

However in his brief ruling, Justice Yusuf said that it was an undisputable fact that Dasuki being the 2nd defendant in the charge was admitted to bail in 2015 and that it would be in the interest of justice to reaffirm the same bail irrespective of the action of another arm of the security agencies.
The judge adjourned trial in the matter to February 24, 2016.

Others charged along with Dasuki are former Finance Minister of State, Mallam Bashir Yuguda; a former Director of Finance and Administration in the Office of the National Security Adviser (ONSA), Shuaibu Salisu; Dalhatu Investment; Sagir Attahiru Bafarawa and a former Sokoto State governor, Alhaji Attahiru Bafarawa.

They were charged with corruption and breach of trust contrary to Section 215 of the Penal Code and Section 17B of the EFCC Act 2004. 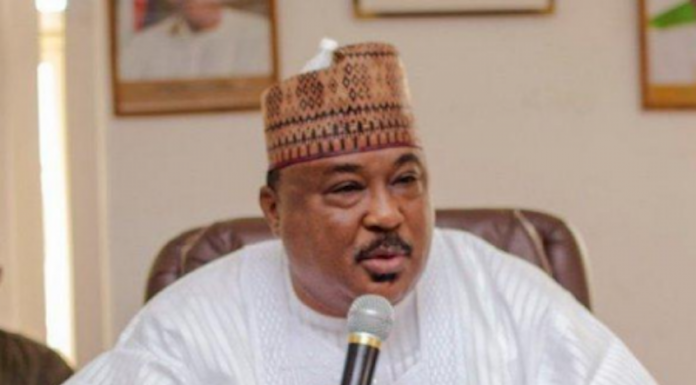