There have been some panicky actions by the Governor Adams Oshiomhole-led members of Edo All Progressive Congress (APC) recently to ease the sickly-sweet-pressure enveloping them over tomorrow’s governorship election in the state. And these seemly horrific moves, PDP supporters said, are surely triggered by the huge support and solidarity messages the PDP governorship candidate, Pastor Osagie Ize-Iyamu, has been receiving in the past few weeks, ahead of the Saturday election.

For example, check some illogical and empty analyses that have featured in some national dailies in past few days – attempting to trick some inexperienced electorate into supporting the APC in the coming election. There have been some reports in the dailies about how some APC leaders have attempted to financially induce the electorate in their planned dirty jobs, ahead of the Election Day proper.

There have also been several consistent attempts to blame Ize-Iyamu for the mistakes of past administrations in the state, including that of the present government. But, from the look of things, the mood of Edo people does not appear to favour these unhallowed, shameful, despicable moves by the APC. It is too late for APC.

Edo people have developed beyond the level of winning elections through any means of financial inducement or intimidation or through oracle as being preached by the Esogban of Benin Kingdom, Chief Edebiri and one local chief from Udo. The electorate is ready to reject and punish the “Pseudo Comrade” Oshiomhole, his puppet candidate, Godwin Obaseki and his party, the APC tomorrow for subjecting them to untold hardship in nearly eight years of their government.

For many people who know the political trajectory of Pastor Ize-Iyamu, they will not have any problem concluding that it is malicious and spiteful to blame him for whatever might have been the mistakes of the past administrations, including that of Oshimhole. For all they have told us in the past few days, many are yet to be persuaded by Oshiomhole/APC’s scrawny argument that there is a better prepared candidate for the Edo State governorship position in any of the political parties than Ize-Iyamu.

Having served in the past as Chief of Staff to the Edo State government and later the Secretary to the State Government (SSG), Ize-Iyamu had piloted the engine of governance and would therefore need no induction course to swing into action from day one, just as no one can bamboozle him to derail good governance as can be done to a typical green horn, like his main opponent, Godwin Obaseki.

Perhaps, the most popular but outlandish criticism has been that Ize Iyamu served in Chief Lucky Igbinedion’s administration – a government in which all the critics themselves served or harvested enormous advantage anyway. And like many right-thinking persons have asked: is it coherent for instance, for us to blame the current Chief of Staff, Mr. Patrick Obahiagbon and the SSG, Professor Julius Ihionvare, for the financial bleeding of the state in almost eight years by Oshiomhole-led government? Surely no!

Apart from intermittent flare-ups by Oshiomhole and some APC members, which many Edo people have refused to believe, no one has so far contradicted the story that it was the same so-called “Igbinedion-led discredited government” that brought and financed Oshiomhole’s election in 2007.

In any case, the same Ize-Iyamu, whom Oshiomhole is battering today, was the Director-General of his campaign organization during the last election that brought him to power. And like Tony Iredia, a seasoned writer stated recently, is it a case of Ize-Iyamu is good when working for Oshiomhole and bad for having worked for Igbinedion and very bad for seeking to work for himself?”
Rather than blaming Ize-Iyamu for their woes, Oshiomhole and APC will do better if they admit that their current problem with Edo people was instigated by their actions – unnecessary war against the people.

For example, it is ungodly and inhuman for the outgoing governor to have recently induced some selected innocent women with N120 million for the purpose of election, when pensioners and local government workers have not been paid 10 to 18 months salaries.
Governor Oshiomhole recently announced a donation of N120 million to some selected market women at the Dr. Osaigbovo Ogbemudia Staduim, Benin City, thanking them for supporting his administration and added that the APC governorship candidate, Godwin Obaseki would do more if elected.

There have been consistent call by well-meaning Edo people, especially the workers, on the Independent Corrupt Practices and Other Related Offences (ICPC) and the Economic and Financial Crimes Commission (EFCC) to investigate how nearly N400 billion as records in the Ministry of Finance have shown, which the 18 local government councils got as federal allocation in nearly eight years was spent.

This is outside the internally generated revenue the state also collects on behalf of the council monthly. And from what I gathered from many of the council authorities, Oshiomhole only pays each local government chairman or sole administrator N1.7 million monthly as security allowance from the allocation, and the councils do not know how the huge balance is spent. These are the real issues that will decide tomorrow’s election.

No matter the boast by APC leaders that the coming election will be rigged in their favour, the good people of Edo have made up their minds and are ready to take their destiny in their own hands by sensibly picking the best candidate that can move the state beyond where it is now; and that candidate is Pastor Ize-Iyamu.

The people remain strong and focused in their on-going efforts to bring about a new state that will deliver socio-economic, healthcare, employment, skill acquisitions and other deliverable services to the people. And there is no better prepared candidate for the position in any of the political parties than Pastor Ize-Iyamu.

We know that the swelling popularity of the PDP candidate and the determination of the people to vote out the APC are already making Oshiomhole and his puppet candidate, Obaseki, panicky. But it is too late in the day for APC to trick the Edo people, who have made up their minds. Their political offences can’t be forgiven for now.

How will the outgoing governor and his stooge, Obaseki, explain to the people how they hugely depleted the state treasury in the past seven and a half years for their self-aggrandisements? Why blaming Pastor Ize-Iyamu for their woes and afflictions?
In any case, we are not bothered about the obliviousness, which some pseudo political analysts have consistently exhibited in the last few days over the untelevised political revolution that is about to take place in Edo State. Tomorrow’s election is about failed promises and bleeding of our state’s resources by APC-led government.

The election will be decided by Edo people, who have registered to vote, including 500,000 students, who have been denied the enabling environment to advance their educational career in the past seven and a half years by the APC-led government. For sure, the political avengers, jobbers and unsteady characters will not have a role to play in who becomes the next governor of Edo State tomorrow.

The people are not fools not to remember the failed promises by APC government nearly eight years ago, to provide jobs for them. And never again will they be persuaded by the deceitfulness and fraudulent promises, especially the recent promise by Obaseki to create more than 200,000 jobs, if elected governor, when they know that it is the punitive and selective tax regime promoted by Obaseki as Head of Economic Team under Adams Oshiomhole-led government that had caused the major economic mess in the state today.

The National Bureau of Statistics (NBS) recently said Edo State presently has one of the highest rates of youth unemployment in the country. When Governor Oshiomhole assumed office in 2008 with APC governorship candidate, Obaseki as the Head of Economic Team, promised to create 100,000 jobs in each year of his administration, meaning that 800,000 new jobs would have been created over eight years.

But Oshiomhole has not kept his promise. The governor and his economic team have not replaced those they retired from Edo State Civil Service. Almost all the thriving businesses – Bendel Breweries Limited, Okpella Cement Factory, Ewu Flourmill, Michelin, Edo Transport Service – which the APC inherited from PDP have collapsed because of the suffocating business environment Oshiomhole and his economic team deliberately created in the state.

The present high rate of unemployment in the state is largely responsible for the predominant incidence of youth restiveness, armed robbery, kidnapping and cult-related activities. These are the real issues that will determine tomorrow’s election.

The Edo people will elect Pastor Osagie Ize-Iyamu because they trust and believe that he can deliver – that his “SIMPLE Agenda” will break and reverse the deteriorating prosperity of our youths, women, and pensioners. They believe they are in the wrong track under the APC-led government and that they surely need to change the change.
-Nabulele is of the Ize-Iyamu Campaign Organisation and wrote from Benin 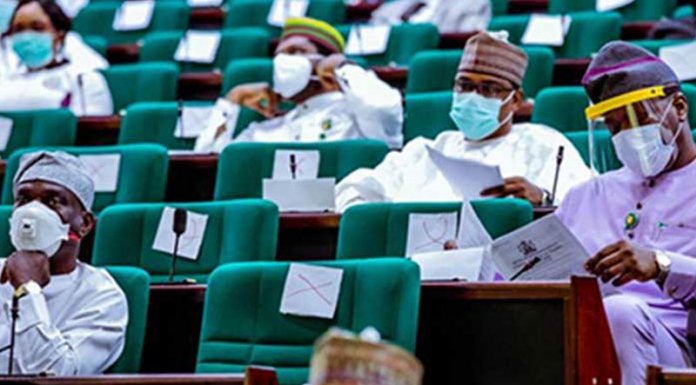 Gunmen Abduct Three Persons in Abuja as Police Rescue 19 Others

Lekki Shooting and the Search for Truth