A former Minister of Petroleum Resources, Chief Dauza Loya Etete (better known as Dan Etete) has queried the decision of the federal government not to prosecute the three oil multinationals – Anglo/Dutch Royal firm Shell, France’s Total and Italy’s ENI Nigerian subsidiary, Agip – that were parties to a transaction entailing the payment of $1.1 billion by the international oil companies (IOCs) into a federal government-designated escrow account in exchange for a stake in a prolific oil block held by Malabu and Oil Gas Limited in 2011.

Etete, who owns Malabu Oil and Gas, has also denied any wrongdoing in the deal.

The federal government last week filed a nine-count charge against Etete and eight others, including the Chairman of A.A. Oil, Alhaji Aliyu Abubakar, and a former Attorney General of the Federation (AGF) and Minister for Justice, Mohammed Bello Adoke (SAN).

But in his first reaction since he was charged to court, Etete likened the charges to the government prosecuting itself.

According to him, the former AGF (Adoke) negotiated the settlement agreement by himself with the involvement of all stakeholders, whom Etete said were properly represented.

The former oil minister also revealed that the federal government, through the Department of Petroleum Resources (DPR), collected a signature bonus of $210 million instead of the original signature bonus of $20 million that was paid for another oil block – Oil Prospecting Lease (OPL) 246 – that was awarded by him when he was the petroleum minister to South Atlantic Petroleum (Sapetro).

Sapetro was founded by a former Chief of Army Staff and later Minister of Defence, General Theophilus Yakubu Danjuma.

Danjuma was later to sell part of his interest in OPL 246 to Addax Petroleum (now China National Offshore Oil Corporation) for about $1 billion.

In text messages sent exclusively to THISDAY, Etete said: “Just a simple question: Can the government litigate (against) itself?

“The Attorney General of the Federation negotiated this settlement himself and all stakeholders took part and were properly represented.

“The federal government collected USD210 million signature bonus instead of the original signature bonus of USD20 million like Danjuma’s Block 246 which was awarded by me at the same time as OPL245.”

The former minister also questioned why the federal government had not charged oil multinationals, Shell and Agip (ENI) and Total, to court over the Malabu oil deal.

“They were parties to all the agreements,” he maintained.

Providing further details on the transaction, Etete said: “An escrow account was established with all the conditions for intents and purposes.”

Etete said that the transaction was an agreement entered into by the parties concerned including the Federal Ministry of Finance.

He also said that the funds involved were never paid into the Federation Account, adding: “I Dauzia Loya Etete took part in all the negotiations that led to the final settlement agreement.”

Etete, Adoke and Abubakar were accused by the federal government of money laundering and other related offences.

They were accused of participating in an illegal deal which involved the payment of $400 million to Malabu Oil and Gas from a Nigerian escrow account with JP Morgan Chase Bank in London.

The money was said to have been paid into Malabu’s account in the defunct Bank PHB, now Keystone Bank Limited.

The offence was said to have been committed on or about 24 August 2011.

They were said to have committed an offence contrary to Section 15 (2) of the Money Laundering (Prohibition) Act.

The fraud charges are in relation to OPL 245, a deep water oil block which was awarded to Malabu Oil and Gas Limited belonging to Etete when he was the petroleum minister between 1994 and 1998 under the Sani Abacha military regime.

However, after the award of the oil block and Abacha’s death, a protracted legal dispute arose between Shell and Malabu over the ownership of the oil asset believed to hold several hundreds of millions in oil and gas reserves.

The dispute was not eventually settled until 2011, when the Goodluck Jonathan’s administration mediated and asked the parties to reach an out-of-court settlement over the ownership of the oil block.

On this basis, Shell, Agip and Total paid $1.092 billion into a designated escrow account to farm into the oil block. Of the $1.092 billion, it is believed that about $600 million was paid to Etete by the federal government, raising eyebrows about the propriety of the transaction.

Like Etete, Adoke has vehemently denied any wrongdoing and last week wrote a letter to his successor in the justice ministry, Mr. Abubakar Malami (SAN), absolving himself of complicity in the transaction. 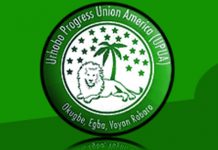 We Don’t Have Any Crisis, Says Urhobo Group